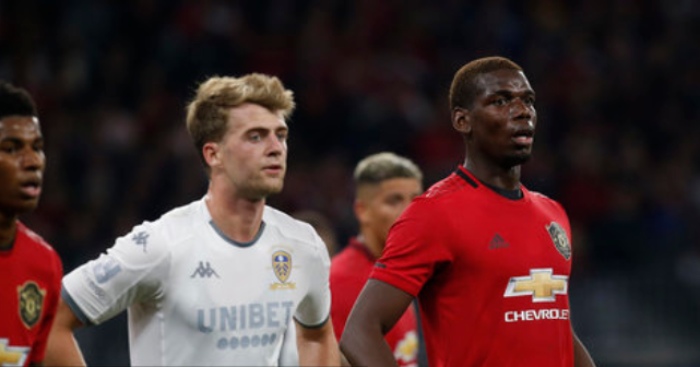 Game to watch – Man United v Leeds United
We’ve waited a while, haven’t we? These two old rivals haven’t met in a league game since February 2004. And there are plenty of reasons to think this should be worth the wait. Leeds are a force of nature, winning and losing 4-3 within their first two games on return to the Premier League. They’ve won 3-0 and 5-2 since then, as well as losing 4-1 twice. Man United are a more predictable but equally oddball side, whose season has comprised thrilling wins on the road but humiliations and disappointment at home.

At the moment, it’s hard to predict which will break first: the excellent if high-wire away wins or the drabness of those home performances. There’s absolutely no way you’re going to catch me out trying to predict this one beyond saying it is definitely going to be more interesting than the 0-0 draws against Chelsea and City and probably closer than the 6-1 against Tottenham. You should absolutely definitely watch this football match.

Team to watch – Tottenham
There’s been a curious reaction to Spurs’ 2-1 defeat at Liverpool this week. Seems to me that most of the criticism about Joseball and bus-parking would actually apply far more accurately to the previous weekend’s game against Crystal Palace. That day, Spurs played eye-catching progressive football right up until they scored the opening goal after 20 minutes, and again for the 10 minutes after Palace’s equaliser. They spent the hour in between trying to sit on that 1-0 lead.

Now that was Mourinho going too far and getting it wrong. What happened at Anfield was Mourinho getting it right; he thrives on taking games like that to the finest margins. It was clearly Spurs’ best chance of getting a result. Inevitably, especially against a team as good as Liverpool – who haven’t lost at home in three years – those fine margins will not always fall your way. That was the width of a post or one uncharacteristically shonky Kane header away from being a masterclass.

The second half was as good as Spurs have looked in quite a while. Against a team far more potent than Palace, they did not retreat into total one-note defence-and-counter. They had three very good chances to go 2-1 up. Mourinho took his stripped-down tactics too far at Palace and got burned; the Liverpool game was actually progress.

And this weekend could provide more. Spurs face Leicester, which is a dangerous but potentially perfect fixture. Leicester are big enough and good enough that beating them would represent a necessary statement after a couple of setbacks. But they are also a perfect fit for Spurs’ counter-attacking low-block. You don’t have to enjoy the aesthetics, but it does bring results. The blueprint for Spurs already exists from as recently as Wednesday night; not only in their own performance against Liverpool but Everton’s 2-0 win over the Foxes. Leicester struggle to break down a disciplined deep-lying defence, preferring space in behind for Jamie Vardy to explore. They also concede extremely silly and soft goals. Ah.

Manager to watch – Sam Allardyce
Just when he thought he was out, they pulled him back in. Time for another patented Big Sam Rescue Mission, and he’s got every chance. West Brom have only seven points from 13 games, but are only three adrift of safety and, more to the point, are not all that far away from being a side who can get themselves out of this.

Late heartbreakers have been the order of the day, but they hung on gamely for an unlikely point at Man City and now have the master of Premier League survival in charge.

He gets thrown straight in to a Midlands derby against Villa, who are a curious side themselves. Before Thursday’s drab goalless draw at Burnley, Villa had won four and lost four of their previous eight games. The wins included that 7-2 silliness against Liverpool and tremendous away victories at Leicester, Arsenal and Wolves. The defeats included a home twatting against Leeds and another damaging home loss to Brighton. Villa’s inconsistency plus West Brom’s new manager bounce could make for an interesting evening

Player to watch – Curtis Jones
Magnificent against Tottenham in midweek. It really isn’t normal for a 19-year-old to look that good, that at ease, in a game like that in a team like this. He made more successful passes than any other player on the pitch against Spurs – and his 81 passes in the opposition half was more than the entire Spurs team managed.

It’s been clear for some time that Jones has outrageous ability. In the last few weeks, a couple more things have been clear. One, he has learned how best to harness it. And two, he is now capable of not just matching but even outshining the dazzling stars around him at Anfield. On Wednesday he turned in a man-of-the-match display in the biggest game of the season so far. Now the next test. Back that up just a few days later. Totally unreasonable, of course. Absolutely no way we should expect him to be that good again. And yet we do.

European game to watch – Lille v PSG
A top-of-the-table clash in Ligue Un played out under the shadow of this week’s collapse of the too-good-to-be-true Mediapro rights deal. Lille owner Gerard Lopez is negotiating the sale of the club, inevitably raising concerns about their future. The timing couldn’t be worse, with Lille currently holding a slender lead over France’s biggest clubs. PSG are a point behind, Lyon a further one behind and Marseille three more back.

Lille are once again punching above their weight, but in the short-term must make sure off-field concerns don’t bleed into the on-field efforts. Long term, the picture is even less clear, even for the big boys.

Football League game to watch – Norwich v Cardiff
Norwich had the look of a relegated team you really feared for, the meekness of their Premier League surrender precisely the sort that looked liable to spill over into the following campaign. Especially given the truncated pre-season. But having lost their last 10 Premier League games – and scoring just a single goal in the process – they have set about the Championship in fine style and have opened up a three-point lead over Bournemouth. Indeed, the top three places in the Championship are currently occupied by last season’s relegated clubs which could mean something tremendously important and significant or just be a coincidence.

Anyway, up next for the leaders it’s Cardiff, who have hauled themselves up to mid-table with a run of five wins in six games.