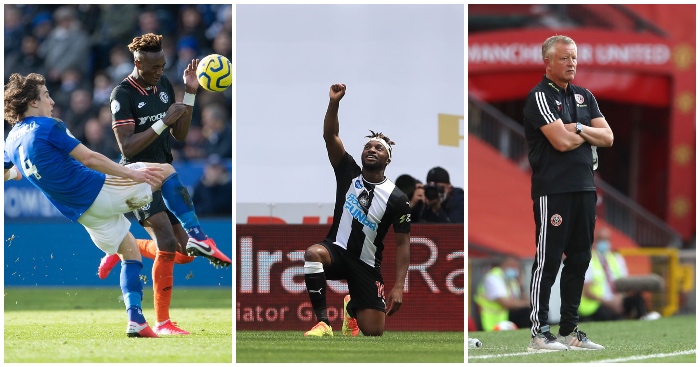 Manchester United are all set to dish out another hiding. Also Saint-Maximin, Leicester v Chelsea and…

Game to watch – Leicester v Chelsea
The evidence suggests these are two very evenly matched teams. Not only do Frank Lampard’s side now sit just a solitary point behind Leicester in the Premier League after victory over Manchester City on Wednesday, but both league meetings ended in a draw. They even had an exact 50/50 split of possession in those two games, and each had eight shots on target in total.

Leicester need a result to kick themselves into gear after a sluggish restart and a frankly terrible year. The Foxes have won just two Premier League games since New Year’s Day, and are at risk of being dragged out of the Champions League qualification spots – which would have been unthinkable at the turn of the year.

Chelsea, on the other hand, have reacted to the surge in form of Manchester United and Wolves, with their wonderfully weird win over City their fourth victory in the last five games. It was a win that showed that Lampard can get Chelsea playing smart football, as well as the riskier free-flowing stuff that had for long periods of the season seemed like it was his plans A, B and C.

And while the primary target of both clubs will be Champions League qualification, they’ve got a decent enough buffer to United in the league to mean they won’t hold back in trying to secure a place in the FA Cup semi-finals. It would be the first time Leicester have done so since 1982.

Player to watch – Allan Saint-Maximin
Matt Targett fell for an Allan Saint-Maximin dummy at least five times in Aston Villa’s 1-1 draw with Newcastle on Wednesday. After the third or fourth occasion the full-back must have thinking: OK, Matt (Targett always thinks in the third person) just stay on your feet, he never shoots first time. But sure enough, Saint-Maximin drew him again, lifted his boot for a strike… and skipped past the floored, embarrassed defender. Targett eventually resorted to attempting to foul the Frenchman, but wasn’t able to do that either.

Current Saint-Maximin is like Adama Traore of two seasons ago: ridiculous pace; excellent technique; the ability to provide the final product. It’s the consistency that’s lacking in Saint-Maximin, the same sort that was once lacking in Traore but now makes the Wolves winger one of the most sought after players in Europe. That regularity of performance and impact changed him from a good player into a great one.

Allan Saint-Maximin’s silky skills just there’s no words to express how much he’s loved at #NUFC.pic.twitter.com/Za22Cc1mkt

Newcastle host Manchester City on Sunday evening in the FA Cup, and with nothing to play for but a bit of prize money in the league, Steve Bruce has absolutely no excuse not to go all out to make it into the semi-finals. This of course doesn’t mean Newcastle will have the ball very much, and they will have to absorb some extreme City pressure, but hopefully Saint-Maximin will be given a bit of a license to express himself, and maybe (just maybe?) be the difference maker.

Team to watch – Manchester United
Holy moly, they played some good stuff on Wednesday evening. The interplay between Anthony Martial, Marcus Rashford, Paul Pogba and Bruno Fernandes was mesmeric at times;  it could easily have been six or seven had Rashford’s finishing been as good as the rest of his all-round play.

It’s been a long time since you could sit down before a United game and expect them to give the opposition a good hiding. In fact, until fairly recently, it was reasonable to question whether a couple of hours of watching them would provide any entertainment whatsoever. For the first time in a very long time, the talk of United is positive, of a bright future.

Questions about Ole Gunnar Solskjaer’s tactics are forgotten, at least for now. Against the weaker sides, he can just let this lot play. They’ve got Brighton, Bournemouth and Aston Villa next up in the Premier League – the poor b*****ds. And perhaps the poorest b*****d of all on Saturday in the FA Cup. Good luck, Norwich.

Manager to watch – Chris Wilder
Sheffield United have not had a good time of it since the restart. They haven’t score a goal – well they have and they haven’t – and have conceded six in their last two games. They were as feeble against Newcastle as they were outclassed by Manchester United.

A European jaunt next season was starting to look less like a dream and more a reality before lockdown, but it now appears the Blades fans may have to wait another year at least for that much sought after away day in Latvia. After the defeat to Newcastle, Wilder said:

“I’m sick and tired of people talking about Europe and the Champions League. It’s about working in the present and the present is that we’ve put in two bang average performances this week.”

They host Arsenal in the FA Cup on Sunday in what will be a blessed relief from the post-lockdown Premier League horror show. It will be interesting to see the side Wilder selects. He made five changes to his side against United, the most since they’ve been promoted, but as Matt Stead said in 16 Conclusions, they had little effect on the game. He will be tempted to keep altering the team, but their season has been built on consistency, and the team’s form as a whole is unlikely to return if the players aren’t given the time or opportunity to recover their own.

Lose and they can put all their focus on getting into Europe, or on the bang average performances, whatever Chris wants us to talk about.

Football league game to watch – Brentford v West Brom
Brentford host West Brom on Friday night, before Fulham travel to Leeds on Saturday, in a top-four ding dong this weekend. Wins for the Baggies and Leeds would surely be enough to secure promotion to the Premier League – they would be tied for first place on 74 points, ten points clear of their closest challenger Brentford, with six games to play. A win for Brentford or Fulham on the other hand, would keep them in the mix.

The Baggies produced a forgivably lacklustre performance in their first game back after the restart, controlling the game in their 0-0 draw with Birmingham, but will be hoping to rediscover their goalscoring form after drawing a blank in their last three.

That’s not been a problem for Brentford, who are both the league’s top scorers (66) and have conceded the fewest goals (33). Chelsea target Said Benrahma – whose coach once described him as being able to “nutmeg a mermaid” – added his eleventh goal of the season last time out in the 2-0 win over fellow promotion pushers Fulham.

European game to watch – Udinese v Atalanta
Atalanta are the top scorers in Serie A with an incredible 77 goals in 27 games. Juventus have netted just 52 times. In fact, after 27 games, no team in Serie A, La Liga, the Bundesliga or the Premier League has been as prolific as Atalanta.

Gian Piero Gasperini has implemented a wonderful gung-ho attitude in his team, where entertainment is the order of the day and defending is an afterthought. There are no particular standout stars, with Josip Ilicic top scoring with 15, and Duvan Zapata and Luis Muriel close behind on 13. They’re very much a team, and if it’s this much fun watching them, playing must be an absolute joy.

They scored eight goals in two games as they saw off Valencia in the Champions League last-16, and have hit teams for seven on three separate occasions this season, including their opponents on Sunday, Udinese, who are winless in their last six games. Get ready for another mauling.