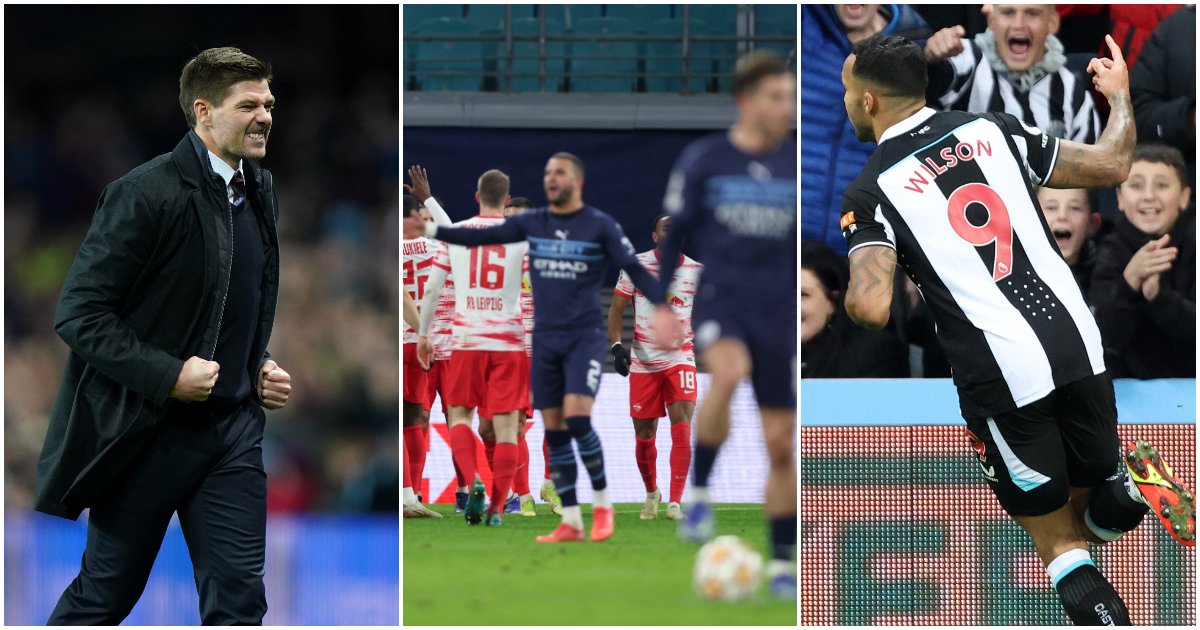 Thank the lord that Aston Villa appointed Steven Gerrard after the December TV picks were made. He and Marcus Rashford have huge weekends.

Game to watch: Leicester v Newcastle
It would be a stretch to say Newcastle are favourites or anything like it for this one, but it’s certainly not a game they should currently be approaching with any fear.

Leicester are now on a 16-game run without a clean sheet in all competitions, one that stretches back to the Carabao clash with Millwall in September. Leicester’s last clean sheet against top-flight opponents came on the opening weekend against Wolves.

They conceded 11 goals in six games in the Europa League, with the three Napoli scored on Thursday night – along with Tomas Pekhart missing a 98th-minute penalty in Warsaw – condemning Leicester to the Europa Conference League.

They’ve also conceded two or more goals in ten of their 15 Premier League games this season. Both teams have won only one of their last six, but Newcastle have one point more over that period thanks to three draws.

It’s still unlikely to be easy for a Newcastle team with defensive problems of their own against a Leicester side that for all its issues remains a formidable attacking unit.

But having got a win on the board at last they at least have some reason to approach this one with a bit of confidence that something good might happen. Which is just as well, because it’s Liverpool and the two Manchester clubs in the three games that follow for Eddie Howe and co.

Team to watch: Manchester City
The Premier League leaders will be confident of picking up another three points at home to Wolves at lunchtime on Saturday, but beyond that they’d probably quite like a clean sheet as well.

It’s not like City have wild defensive problems or anything – they’ve conceded only nine league goals all season – but they are on a curious run of five games in all competitions now without a shutout to their name. Until the chiefly meaningless (Kyle Walker ridiculousness notwithstanding) defeat at RB Leipzig on Tuesday night it hadn’t much mattered with the previous four games all ending in City wins. But it’s the sort of thing that will niggle a team and manager who set such high standards.

On paper, City couldn’t ask for better opponents this weekend to put that silly little run to an end. Wolves have scored just once in their last five games and not at all in their last three.

Player to watch: Marcus Rashford
Set to start again alongside Cristiano Ronaldo at the front of Ralf Rangnick’s 4-2-2-2 against Dean Smith’s Norwich, whose 3-5-2 gave Spurs food for thought last week. The 3-0 win for Spurs looked comfortable enough, and in the end it was, but they needed a wonder goal from Lucas Moura to open the scoring and for the hour or so the game remained only 1-0, Norwich were very much in it.

Whether they stick with either the back five or the front two for United, who line up so differently to Antonio Conte’s Spurs, remains to be seen. But there were signs it could be useful for Norwich in games like this where they are so palpably outgunned on paper.

Rashford scored three goals across United’s two victories against Norwich when the Canaries were last in the top flight two seasons back and, having failed to find the net since the 3-0 win at Spurs back in October, will hope for more of the same – however many defenders Smith places in his way.

Manager to watch: Steven Gerrard
Offer thanks to whichever god you happen to believe in that Steven Gerrard’s arrival at Aston Villa happened after December’s TV fixtures were locked in and Liverpool against Villa had been left on the Saturday 3pm shelf. Can you imagine a full televised Super Sunday build-up to this one? Instead we’ll have to make do with the 3,487th round of earnest discussions about the merits or otherwise of The Blackout as Gerrard’s return to Anfield goes untelevised.

While the #narrative would have made everything else about the coverage entirely unbearable, it is actually a bit of a shame the game isn’t on the telly, because it should be a good one and does provide another test of Gerrard’s mettle.

He’s been so impressive thus far, his Villa side winning three games from four on his watch to ease clear of any trouble and start glancing a bit further up the table. But in many ways the most impressive of the four performances came in defeat to Manchester City, Villa eventually going down just 2-1 and posing plenty of questions for City on one of their godlike days when against a team not fully switched on they can easily rack up six or seven goals.

Liverpool are also such a side and how Gerrard’s fast-improving Villa stand up to this challenge will give another clue as to the long-term prospects of both manager and team.

Football League game to watch: Huddersfield v Coventry
Both teams are on runs of one win in six games which has seen them fall out of the top six and now looking to force their way back in.

The Terriers would move within a point of Coventry with a win, and 13 points from the last 18 at the John Smith’s Stadium suggests they should be reasonably confident against a Sky Blues side with only two wins and eight goals from their ten Championship away games to date.

European game to watch: Real Madrid v Atletico Madrid
Real Madrid are seemingly cruising to La Liga glory this year as their own fine form coupled with the struggles of Barcelona and city rivals Atletico have allowed Los Blancos to open up a commanding eight-point lead over second-placed Sevilla with Atleti a couple of points further back.

The crisis engulfing Barcelona has taken much of the attention, inevitably, but Real’s fine form is noteworthy itself. In 12 league and Champions League games since the October international break, Real Madrid have won 11 including each of the last nine.

Atleti will have taken confidence from scrambling into the last 16 of the Champions League this week but will need to pull something else out of the hat to halt their local rivals.