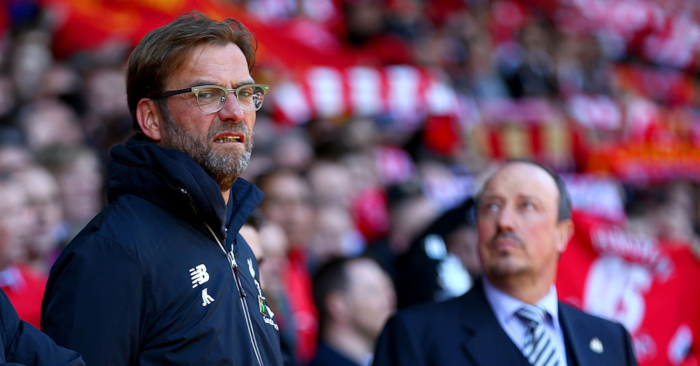 Game to watch – Newcastle v Liverpool
Imagine being in a happy, long-term relationship that ends in part due to your inability to conceive. You split amicably, going your separate ways but retaining a mutual respect and love for one another. Then, almost a decade later, your former partner asks you to light some candles, leave some rose petals, put on some Marvin Gaye and look after their cat while they spend a bit of noisy alone time with their new significant other upstairs.

Rafael Benitez could never quite get the job done, so he will not want to help Jurgen Klopp consummate his Liverpool marriage either. The Spaniard would be thrilled if his beloved Reds won the Premier League title one day, but not at the expense of Newcastle.

So those expecting Benitez to help the visiting side out on Saturday evening, to lie back and think of Merseyside, are deeply misguided. Newcastle have nothing to play for in terms of survival and little to gain in terms of position, but pride is an effective motivational tool.

Benitez might also see this as a final pitch to Mike Ashley, one last ultimatum. If he can head into contract negotiations and discussions over summer transfer plans with the scalps of both Manchester City and Liverpool adorning his beautiful, bulging Spanish arms, Newcastle would be utterly stupid not to appease him.

But the story is Liverpool, and whether their seven-game winning Premier League run will be affected by Wednesday’s disastrous trip to Barcelona. For the first time this season, neither their Champions League nor Premier League fates are in their own hands.

Had they been embarrassed for 90 minutes en-route to a chastening defeat in the Nou Camp, there would have been an explosive reaction three days later from a squad and manager desperate to prove a point. But the sheer nature of matching Barca stride for stride and still losing by three goals could have a devastating consequence.

A season that promised so much could be effectively ended in the space of half a week. All Liverpool can hope to do is return to winning ways as soon as possible.

Player to watch – David de Gea
Who rescues the self-immolating chief firefighter? Or the drowning lifeguard? What about the flailing world-class goalkeeper?

No-one, as it happens. Dave no longer really saves, at least not as often or as reliably as he used to. The hangover from a World Cup riddled with mistakes has taken time to set in, and errors against Arsenal, Barcelona, Everton, Manchester City and Chelsea in recent months have cost Manchester United.

But Sergio Romero’s injury has removed any possible questions over his position against Huddersfield on Sunday. Lee Grant is not about to dislodge a player who has earned more than enough faith over the past few seasons.

“Ifs and buts and hypothetical questions,” Ole Gunnar Solskjaer said when asked whether Romero would have started if he was available. “Sergio knows how highly I rate him.”

The Norwegian added that his “fantastic goalkeeping department” had “experienced better times,” but De Gea can only hope to secure a piece of Manchester City history in West Yorkshire, as well as boost United’s dimming Champions League hopes.

Manager to watch – Brendan Rodgers
He spoke a good game last week, insisting that he hadn’t “given it a great deal of thought,” but Brendan Rodgers has surely been discussing this game with his portrait of Brendan Rodgers for a fair few weeks. There is no manager who would take more delight in emerging from the shadows to rush centre stage.

Leicester and Rodgers have been reduced to one of the many subplots of this Premier League title race; the Northern Irishman will want to rewrite history. It will not be about helping Liverpool win the league – I refer again to the Benitez conundrum – but about stopping Manchester City doing so.

“My job is to do Leicester a favour,” Rodgers said before the 3-0 victory over Arsenal. “Every game is important.” He also referred to using the club’s run-in as a “great platform” to launch them into next season, with Wolves three points ahead in the race to finish seventh. As underwhelming as that may sound to some, it would be their second-highest top-flight finish since 1976.

City would be foolish to underestimate the Foxes. They (27) and Liverpool (25) are the only two sides to earn more Premier League points than Leicester (19) since Rodgers’ appointment. The latter are the only side to score more goals in that time (25) than the Foxes (19), and only Liverpool (5), Everton (5) and City (2) have conceded less (9).

Leicester also inflicted upon City a 2-1 defeat in December, while Rodgers will be eager to protect his status as one of just six managers Pep Guardiola has faced twice or more without ever beating (hello Roberto di Matteo, Ronald Koeman, Carlo Ancelotti, Bruno Genesio and Guus Hiddink). Five years after his last meaningful attempt, can he help deliver the title to Anfield?

Team to watch – Cardiff
It did rather feel as though the ship sailed last weekend. Neil Warnock gambled, using the visit to Fulham as a Million Pound Drop scenario. He placed the majority of his money on a draw before hurriedly banking it all on a win, yet ended up on the end of a potentially decisive defeat.

The glimmer of hope is that Brighton are just four points ahead, with the Seagulls visiting Arsenal and hosting Manchester City in their final two games. Cardiff’s fight is not quite over.

But make no mistake: this is an uphill battle. They travel to Old Trafford on the final day to take on a Manchester United side potentially battling for Champions League qualification. And for that match to matter, they must first host one of the Premier League’s rudest guests.

Crystal Palace are sixth in the Premier League away table, scoring more goals on their travels (29) than Chelsea (24), and just two fewer than Liverpool. Cardiff are 18th in the home table, with only Huddersfield (14) losing more often (10) and no side conceding as many (35).

The Bluebirds have left themselves a mountain to climb, and must surely win to maintain any pretence of survival. But at least there is no room for over-thinking: Cardiff know full well what they have to do.

Football League game to watch – MK Dons v Mansfield
With the Championship relegation places confirmed, Derby can take the final play-off spot with victory at home to West Brom. Middlesbrough are a point behind and travel to doomed Rotherham, while Bristol City, a further point back, make the trip up to Hull. Norwich, three points ahead of Sheffield United (away at Stoke), will win the title with a draw at Aston Villa.

Luton (at home to Oxford) and Barnsley (away at Bristol Rovers) are level on points at the top of League One, with Doncaster (at home to Coventry) one point ahead of Peterborough (at home to Burton) in the race for the final play-off spot. Anyone from Wimbledon in 19th on 49 points to Scunthorpe in 23rd on 46 points can join Bradford in suffering the drop.

But the real drama is in League Two, where Lincoln have sealed the title and Sol Campbell’s Macclesfield realistically need a point at home to Cambridge to secure the great escape at the expense of Notts County (away at Swindon).

You see, goal difference separates third-placed Mansfield from MK Dons in fourth, and that final automatic promotion spot. But fate has dictated that the two sides face each other in a quasi-play-off at Stadium MK, with the winner claiming the glory.

A draw would do for Mansfield, who have contrived to lose their last two games. MK Dons, who have won just one of their last five, need to win. Neither seem to actually want promotion, but one of them will simply have to accept it.

European game to watch – Aberdeen v Celtic
Celtic are almost certain to win an eighth straight Scottish Premiership title. They are nine points clear of second-placed Rangers with just three games left. It would take a gargantuan and hilarious collapse from here for Neil Lennon to ruin all Brendan Rodgers’ best-laid plans.

But just imagine. They travel to third-placed Aberdeen on Saturday, then to Ibrox next Sunday. Their final game is against fellow Scottish Cup finalists Hearts, down in sixth in this weird old league system.

So here’s to two Celtic defeats and two Rangers victories in their next couple of games to set up a pulsating, nerve-shredding final day. And to Celtic scoring within the first minute to kill any tension.