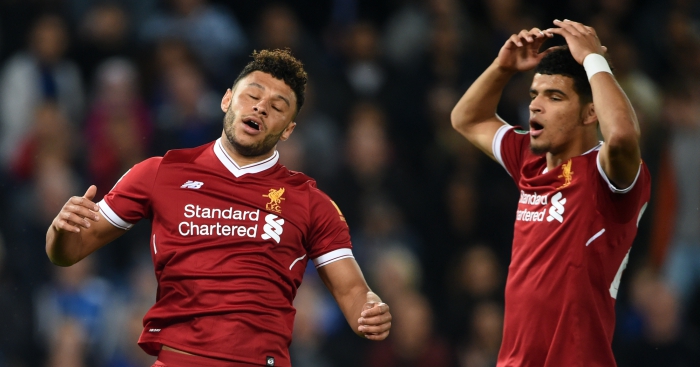 Game to watch – Leicester v Liverpool
‘A match stuffed with shots, potential defensive collapse and more questions over a top-six manager,’ was the description of this meeting in Big Midweek, Daniel Storey converting the hat-trick with aplomb. Leicester and Liverpool shared 29 shots and moments of defensive indecision in the Carabao Cup on Wednesday, and the pressure continues to mount on Jurgen Klopp. Same again on Saturday teatime?

The 2-0 defeat to Leicester in midweek means that Liverpool have followed four consecutive victories with four straight winless games as seamlessly as managers slip in and out of crisis mode. Antonio Conte started the season with that crown, but it has been passed around to Arsene Wenger and Mauricio Pochettino in the opening month. Klopp and Ronald Koeman are now seemingly determined to keep it in Merseyside.

Not since Liverpool’s fabled collapse in January and February earlier this year have they gone more than four games without a win in all competitions. That slump coincided with Sadio Mane’s absence through international duty, and the Reds are yet to prove they can perform without their forward talisman.

In the 21 games that Mane has not started for the club since he joined, Liverpool have won eight, lost seven and drawn six. They have scored 26 goals and conceded 20. No player embodies Klopp’s style more, no player meets the manager’s demands to such a consistently high standard. But during his suspension, Liverpool must find a way to cope.

The odds are not in their favour. Leicester have won the last three meetings between these two sides, and while it was Shinji Okazaki and Islam Slimani tormenting a makeshift defence on Wednesday, it has been Jamie Vardy getting the better of Joel Matip and Dejan Lovren in recent years. The 30-year-old has scored five goals in six games against Liverpool – more than against any other club but Arsenal (also five).

Consider then that both Matip and Lovren are doubts for the game, and one does not hold out too much hope for Ragnar Klavan and Joe Gomez to atone for their mistakes from Wednesday. With a must-win trip to Russia to face Spartak Moscow following three days later, rotation will again be on the agenda. But Klopp must know the importance of winning first and foremost. Going five games without a victory almost ended their season in January; it could have the same effect so early in this campaign.

Player to watch – Mikel Merino
Few things in life anger Graeme Souness more than a central midfielder not pretending it’s still the 1970s and running around trying to break everyone’s legs. The Scot takes it as an insult, a personal slight when a player does not end the game covered in mud, bleeding from the mouth and barely able to walk.

“It’s a joke,” the Sky Sports pundit said of some admittedly poor defending from Mikel Merino against Huddersfield in August. The Spaniard had arrived too late to block Aaron Mooy’s shot, and the Terriers’ eventual winner.

“You can’t win games of football where you’ve got people making those kinds of decisions,” continued Souness in his onslaught. “It’s weak. It’s what you’d see in kids’ football.”

One can only wonder what he makes of Newcastle’s playmaker and star of the season so far now. The midfielder ranks top of the club for tackles (13), interceptions (9), successful dribbles (7) and passes (196) after five games. The Toon Army have their very own Action Man.

Rafael Benitez has set about creating a masterpiece out of broken crayons at St James’ Park this summer, but Merino is his pièce de résistance. The 21-year-old’s loan from Borussia Dortmund becomes permanent for £6m when he has played 20 Premier League games for the club. That is the inevitable destination to one of the best deals of the summer, and the next stop is a meeting with Brighton on Sunday.

Team to watch – Manchester United
Sir Alex Ferguson only managed it seven times in 54 games in his final season. The combined efforts of David Moyes and Ryan Giggs matched the Scot’s record with one extra game in 2013/14. Jose Mourinho himself oversaw it just six times in 64 games last season.

Scoring four goals or more in one match is as impressive a feat of endurance as it is skill, and one Manchester United were once accustomed to. The swashbuckling sides of Yorke and Cole, the three-pronged attack of Rooney, Ronaldo and Tevez, the sublime talents of Solskjaer, Van Nistelrooy and Berbatov – at one point or another, all have comprised parts of the same ruthless machine, putting defences to the sword throughout the country and Europe.

Those times have not quite returned to Old Trafford, but Mourinho has come closest to finding the clearest path for the long and arduous journey back. His United side have scored four goals four times in eight games this season; Louis van Gaal presided over the same number in 103 matches.

There is a reason Mourinho crows about the “happiness” in his squad. Anthony Martial and Ander Herrera played considerably bigger roles in recent seasons, while Jesse Lingard might point to a record of two assists in 51 Premier League minutes and expect more opportunities, but this is a squad eager to overlook their differences and work towards one common goal. The result is wonderful football.

Southampton had better be wary. They host a rested Romelu Lukaku and Henrikh Mkhitaryan and a recharged Nemanja Matic, Phil Jones and Eric Bailly, as well as players looking to keep proving their point in Martial, Lingard and Marcus Rashford. Four more?

Manager to watch – Ronald Koeman
If you are short of present ideas for your struggling Premier League manager, a gift voucher or a new pair of socks is a safe bet. Maybe a cap emblazoned with the club’s badge? A ‘world’s best boss’ mug? Or perhaps purchase the finest wrapping paper your nearest 24-hour garage has to offer, and deliver four home fixtures in a neat little bow, starting with Sunderland and Bournemouth.

Ronald Koeman is no fool; the Dutchman knows that pointing to a Carabao Cup win over the Black Cats as a sign of progress is placing a literal piece of paper over emerging cracks. Three points against Bournemouth at Goodison Park would not turn the tide completely, but it would be a start.

Koeman is somewhat justified in complaining about Jose Mourinho placing undue pressure on him and his side. Everton spent £150.6million this summer, but lost their record goalscorer. They had ample time to replace him, but 20-goal strikers are a rare commodity. It is also not as if the Toffees were on the precipice last season of the top four; they finished eight points behind a sixth-placed United side who have strengthened considerably.

Yet this season has been nowhere near good enough, record spend or otherwise. The Dutchman is running out of excuses, and reaching the fourth round of England’s fourth-most important competition does little to remedy that. In Bournemouth, Everton host a team who have won only one away league game this calendar year. Against Sunderland. Obviously.

One-on-one battle to watch – Harry Kane v Winston Reid
The London derby. The nawty meeting. West v Totten. The ‘oh, I don’t like our expensive new stadium’ derby. Whichever title Sky Sports bestows upon Saturday lunchtime’s game, the London Stadium is sure to play host to goals, bookings and general good-natured tomfoolery. Until Eric Dier goes in two-footed on someone and all hell breaks loose.

Central to events will be Harry Kane, derby goalscorer extraordinaire. In 34 Premier League games against London-based opposition, the striker has scored 21 times; he has five in his last five meetings with West Ham.

But something will have to give on Saturday. West Ham have only conceded once in their last four home games against Tottenham, and a recent run of two consecutive Premier League clean sheets has left Joe Hart looking out of his living room window for the first signs of the apocalypse. Winston Reid has been integral to their success since moving to a three-man defence, and will be hoping someone has taken Kane’s calendar back a month to confuse him.

Football League game to watch – Sheffield Wednesday v Sheffield United
The Steel City derby. The Blades and the Owls. The team with the red and white striped shirts with black sleeves and black shorts and the team with the blue shirts with white sleeves and white shorts. Whichever title Sky Sports bestows upon Sunday lunchtime’s game, and I personally desperately hope it is the third one, Hillsborough will be rocking.

The Championship season may only be eight games old, but few would have expected Sheffield United to be above their older brothers in the table by late September. The Blades are in the final play-off spot – the absolute minimum target of Wednesday, who are two points and two places behind.

In an alternate reality, these two sides could have been divisions apart. Wednesday missed out on Premier League promotion at the final hurdle, while United finally escaped from League One at the sixth time of asking. Fate has conspired to ensure these two sides are meeting for the first time since 2012. It will be fun.

Earlier this week, Giorgio Chiellini described this as the “strongest” Torino side he had ever faced. “It’s nice to see that finally the level of the derby is rising,” added the Juventus centre-half. A quick glance at the recent history of Turin derbies suggests he is rather wide of the mark – Torino have beaten Juventus once in their last 21 attempts – but that tells only half of the story.

This Torino side is more than capable of competing. They are fifth in Serie A, four points behind joint-leaders Juventus. In Andrea Belotti they have a striker courted by the elite, in Adem Ljajić they have his perfect foil, and in Nicolas Nkoulou they have one of the Italian league’s best performers of the season so far. Juventus have been far from convincing thus far, and a fixture against their bitter rivals could be their undoing.