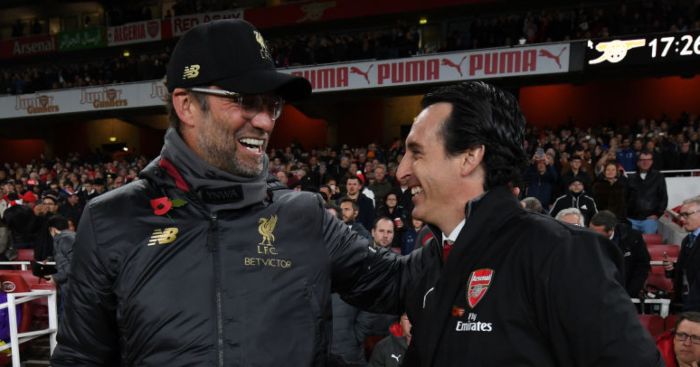 Game to watch – Liverpool v Arsenal
The foundation of observational comedy is empathy. If a joke is delivered with honesty and relatability, as well as a punchline based on first-hand experience, it will resonate further.

Perhaps that makes Unai Emery football’s own answer to Jerry Seinfeld. “For us we don’t want to play against Liverpool ever,” might be the most gentle form of pre-match banter imaginable, but his joke declaration that “we’d prefer not to play against them” surely contained a semblance of sincerity.

It’s funny because it’s true. Arsenal were beaten 5-1 on their last visit to Anfield; of course they would prefer not to play the European champions. But, had they been tasked with compiling a list of early-season opponents, Liverpool would certainly not have named the Gunners first.

Something will have to give. The only two teams to start the Premier League campaign with consecutive victories do battle on Merseyside this weekend, and a further three points is not the only prize.

A win for either side brings with it the sort of momentum and confidence that cannot be bought. Liverpool and Arsenal experienced vastly different transfer windows but no new player can provide the same sort of boost as a victory over a direct rival. Not even Andy Lonergan on a free transfer.

The hosts can set a new club record for consecutive Premier League wins. The visitors can win their opening three games of a Premier League season for the first time since 2004/05. And we can all excitedly await the prospect of Mo Salah, Sadio Mane and Roberto Firmino against Alexandre Lacazette, Pierre-Emerick Aubameyang and Nicolas Pepe.

If Shkodran Mustafi and Dejan Lovren are tasked with keeping those attacks out, this fixture would have a fitting feel. Their last 16 meetings at Anfield have ended in the following results:

Both teams to score seems a decent bet, doesn’t it?

Player to watch – Jack Grealish
It seems more than a little harsh to tar Jack Grealish with the brush of such a damning statistic. He is still just 23, a relative novice at this level whose first top-flight steps were supervised by Paul Lambert, Tim Sherwood, Remi Garde and Eric Black.

But there it is, sticking to his reputation like a particularly bad smell: it is quite a feat to become the first player to lose 20 consecutive Premier League games.

It was supposed to be different, a triumphant return to the stage he first graced an unfathomable five years ago. But Grealish, while considerably developed since then in terms of his skill level, physicality and maturity, has found this a difficult habit to kick.

Everton are far from an easy opponent to break the spell against and prevent the streak stretching to 21. Yet Villa Park expects, particularly after the statement of a promising summer has been followed by a mere whimper.

The home defeat to a Champions League finalist can be excused, but Bournemouth are precisely the sort of team Villa should be looking to overhaul. Losing while scoring will only be excused for so long. Dean Smith’s side must avoid becoming accustomed to coming so close yet so far.

For Grealish, Friday evening is his latest chance to taste Premier League victory for the first time since his assist helped sink West Ham in May 2015. Time to step up, captain.

Manager to watch – Javi Gracia
This is no time for panic. Had Watford followed that opening-day aberration against Brighton with a similarly abject performance at Everton the following week, the fear might have crept in. But there was a sufficient response at Goodison Park to suggest that Javi Gracia still has the respect and admiration of his players.

With that said, Watford need to avoid slipping into the sort of trance that is difficult to snap out of. Their only Premier League victories since March have come against Leicester in Brendan Rodgers’ first game, and relegated pair Fulham and Huddersfield. No team is on a longer winless top-flight league run than the Hornets (6).

The absence of captain Troy Deeney could force a necessary shake-up, an opportunity to freshen up what may have become stale. And the arrival to Vicarage Road of West Ham, a team similarly struggling to find their feet, could be ideal.

But a repeat of the 4-1 away win that the Hammers earned at this stadium on the final day of last season will see Gracia’s position as third-favourite to be the next Premier League manager to leave his post look awfully generous. When Steve Bruce and Roy Hodgson are laughing at you behind your back and taking pity, you have to wonder where it all went wrong.

Team to watch – Chelsea
It took Sir Alex Ferguson and Avram Grant the same amount of games – three – to oversee their first managerial victories in English league football. Therein lies the danger of judging Frank Lampard on how long his own wait will last.

Of course, it has already been established that Lampard will take the credit for any success, while his Chelsea squad will shoulder the blame for any failure. A win will be chalked up to his tactical acumen and motivational skills; defeat is inevitable when you look at the (expensively assembled) squad at his disposal.

The acrobatics required to absolve the 41-year-old for losing to or even drawing with against Norwich would be extraordinary. Defeat to a rejuvenated Manchester United and a stalemate with a fine Leicester side can be forgiven. Failing to beat a promoted team that spent barely anything on reinforcements would be downright embarrassing.

Norwich have not beaten Chelsea since football legend Ashley Ward scored twice in a December 1994 home win. Not even Avram Grant could f**k this one up.

Football League game to watch – Stoke v Leeds
Bottom versus top is beautiful at any stage of the season, particularly when one can’t please their own fans and the other are only default favourites for the title.

It was against Leeds that Nathan Jones recorded his first win as Stoke manager in January. That only two victories have come in the subsequent 22 Championship games tells its own story. Both teams need this.

European game to watch – Benfica v Porto
Juventus might be starting their Serie A campaign in the hope of launching a more effective title defence than their European contemporaries, but the real action this weekend is provided by Portugal.

Two points separated Benfica and Porto atop Primeira Liga last season, with the former claiming the crown courtesy of wins in October and March. They have shared the last 17 championships between them, and need not even wait until August to land a blow that could prove fateful in May.