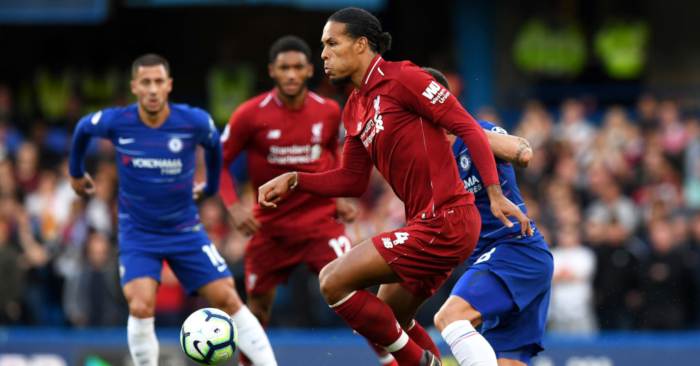 Game to watch – Liverpool v Chelsea
With Jordan Henderson, Simon Mignolet, David Luiz, Cesar Azpilicueta, Willian and Eden Hazard the only players still at Liverpool or Chelsea having also been part of their respective 2013/14 squads, Sunday feels rather like a 20-year reunion of Friends attended only by Matt LeBlanc and Jennifer Aniston.

Mohamed Salah has also swapped blue for red in the interim, but that will not stop many reflecting on roughly this time five years ago when table-topping Liverpool welcomed third-placed Chelsea to Anfield in April with Manchester City, in second, powerless to stop this Premier League title procession.

Yet aside from those basic facts, there is barely a modicum of similarity surrounding that scenario and the one that presents itself this weekend. Liverpool went into that game in 2014 boasting a three-point lead with three games remaining, but they seem to have more control and focus under Jurgen Klopp than they ever did with Brendan Rodgers in charge, despite the more marginal advantage. They have their feet fixed on the ground and their heads dead level instead of riding a wave of emotion and sentiment.

It is the first time since then that Liverpool have truly competed for the title and so Luis Suarez’s desperation, Mark Schwarzer’s actual clean sheet and Steven Gerrard’s fatal first-half stoppage-time slip – as well as his eight shots to try and atone for it in the second half – are sure to be revisited. But the stoic Maurizio Sarri is an ill-fitting replacement for the abrasive Jose Mourinho, Andy Robertson feels like a slight improvement on Jon Flanagan, and Iago Aspas will not be allowed anywhere near a corner flag.

Nor are the two teams as close in quality as they once were. Five points and one place separated them last season but while Liverpool spent around £165m this summer to improve exponentially, Chelsea have taken much smaller steps forward despite an outlay of just under £130m.

Liverpool will, however, be mindful of their last three meetings with Chelsea. The 1-1 draw at Stamford Bridge in September required a last-minute Daniel Sturridge equaliser, while the Blues triumphed in the League Cup that same month to become only the second visiting team to win at Anfield since April 2017.

Chelsea actually inflicted Liverpool’s penultimate Premier League defeat. Olivier Giroud scored the only goal in a 1-0 win in May that should remind the hosts of their fallibility, as well as the threat the visitors pose. Hazard provided quite the reminder on Monday as Chelsea almost incomprehensibly went third.

But Liverpool have won their last six games, have enjoyed a longer rest and obviously considerably shorter trip from their European excursions, are at their impenetrable home fortress and have learned from the painful lessons Chelsea taught them five years ago. This does not slip.

“Whenever I play against Arsenal – and this is just a personal thing – I go up and think ‘let me whack the first one, then we will see who wants it’.”

It was Troy Deeney’s use of the word “cojones”, and the question as to whether Arsenal possess them, that captured the headlines. Watford had just come from behind to beat the Gunners at Vicarage Road with a stoppage-time Tom Cleverley goal, with Deeney having equalised with a penalty. Recent events suggest he was always bound to maximise his subsequent time in the spotlight.

The forward quite inevitably missed from the spot in their subsequent meeting as Arsenal eased to a 3-0 victory at the Emirates Stadium; Unai Emery is doing a stellar job but the supreme home form supplemented by travel sickness lingers.

The Gunners have already earned more away points in the Premier League this season (19) than in all of 2017/18 (16), but their results on the road will have to improve if their Europa League quarter-final advantage is to still be considered as a bonus. Four of their remaining six league games are outside of north London, and any repeat performances of their Everton defeat will likely end any hopes of Champions League qualification.

Watford will therefore provide quite the physical test on a Monday evening, four days after and three days before crucial European games. Granit Xhaka, largely excellent before suffering an injury on international duty, has not played for Arsenal in almost a month. He will be awfully eager to show Deeney and the FA Cup finalists his balls.

Manager to watch – Pep Guardiola
Much has deservedly been made of Pep Guardiola’s record in Champions League quarter and semi-final away legs, with Tuesday’s defeat at Tottenham meaning he has not won one since 2011. But Manchester City ought to be wary of a similarly worrying aspect of that run.

Guardiola has overseen 15 quarter and semi-final away legs as a manager across spells with Barcelona, Bayern Munich and Manchester City. He has lost (4) or drawn (4) more of the fixtures played directly after than he has won (7).

City followed a 3-0 defeat at Anfield in the Champions League quarter-finals last season with a loss at home to Manchester United. Bayern were beaten 1-0 by Atletico in the 2015/16 semi-finals, drawing with Borussia Monchengladbach in their next match. Guardiola has dropped points to Augsburg (twice), Real Sociedad and Villarreal in such games in recent years.

It could simply be a statistical quirk or a coincidence, or it could point to an underlying issue. The extra travel and the inevitable fixture congestion offer mitigation, but perhaps Guardiola’s management itself is part of the problem. His over-thinking of tactics and team selection in the European ties may have a negative domestic impact.

One thing is for sure: City cannot possibly afford not to beat Crystal Palace on Sunday. Their game will finish less than an hour before Liverpool kick off, so pressure must be applied to the current leaders. And besides, only one manager has ever beaten Guardiola twice in a single league season. Can Roy Hodgson join Antonio Conte’s exclusive group?

Team to watch – Manchester United
In the midst of a crisis that spans four defeats in five games, three of which have been by a single goal and three of which have come away from home, Manchester United are in desperate trouble. The fickle nature of football means a run of 14 wins in Ole Gunnar Solskjaer’s first 17 games, victories away at Arsenal, Chelsea and Tottenham and the remarkable triumph over PSG, have long been forgotten.

A more level-headed, sensible view is that this side is simply regressing to a six-year mean that is impossible to reverse in four months. The reaction to the peak of the Solskjaer rollercoaster was as exaggerated as the response to the current trough United are feeding from. The middle ground, as ever, is bizarrely unoccupied.

The short-term burst after Jose Mourinho’s departure was inevitable, but so too was something of a crash back down to earth. United have one of the most expensively assembled squads in football history but their recruitment policy has been aimless and ill-considered, covered with the fingerprints of not only the four managers that directly preceded Solskjaer, but the hapless Ed Woodward too.

It stands to reason that Champions League qualification is of vital importance to the plans of any club with similar ambitions, but that applies to United perhaps more than anyone else. A seat at Europe’s top table is key to both their ability to attract the right calibre of player and to tempt those already there to prolong their stay.

A win at home to West Ham on Saturday evening represents just one step towards persuading David de Gea to remain, convincing the likes of Jadon Sancho to join and assuring supporters that the club is finally on the right track again. The race to finish in the top four cannot be won this weekend, but it could be terminated by any slip-up.

Football League game to watch – Aston Villa v Bristol City
When Aston Villa came from behind to secure a 1-1 draw away at Bristol City in September, neither side seemed particularly capable of pushing for promotion. They were 8th and 11th respectively, separated by one point after ten games, with Leeds having already built up a sizeable gap at the Championship’s summit.

Norwich, 12th at that point, have proved any conclusions made on England’s second tier based on the first few months to be folly. But as the Canaries have soared to the top of the table, Villa and Bristol City’s respective rises still seemed unfathomable.

Villa were meant to be in this position, of course. They started the season as one of the favourites for promotion, with a squad and a manager seemingly built for success. But Steve Bruce has made way for Dean Smith and an eight-point gap to sixth on February 23 has been eviscerated by seven consecutive wins.

Bristol City were never supposed to last the course. They ran out of steam last season to finish 11th, sold their best defender and top scorer and were in the bottom half by mid-December. Yet despite having just two players with more than five goals in all competitions, they will not relent.

With Middlesbrough and Derby both stuttering, Villa and Bristol City have a respective five and four-point buffer to those outside the play-offs, with the latter even enjoying a game in hand. A win for either on Saturday would be pivotal, even just in terms of momentum.

European game to watch – PSG v Lille
A major European league title could be won this weekend, with the leaders hosting the team in second. Can PSG build on their minuscule 20-point lead over Lille with a game in hand to seal their sixth crown in seven seasons? It really is touch and go.