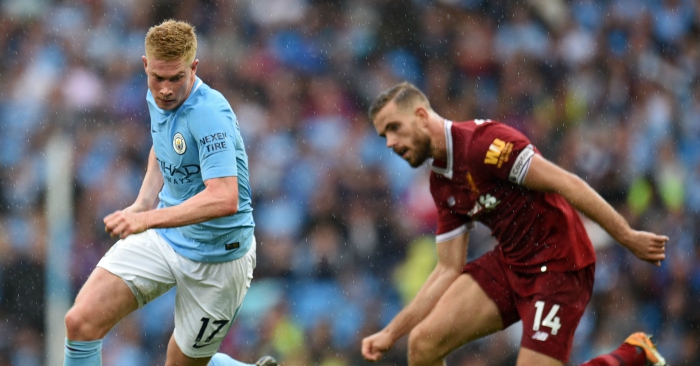 Game to watch – Liverpool v Manchester City
After 22 games of the Premier League season, it is safe to suggest any doubts regarding Manchester City’s credentials have been thoroughly disproved. Pep Guardiola’s team has swept aside almost any and every domestic opponent, with the exception of Everton in August and Crystal Palace in December. Their 15-point gap at the table’s summit shows no sign of abating.

But of their 20 league victories, an asterisk has long been placed against one. The 5-0 victory over Liverpool in September betrayed what was a remarkably close and enthralling game before Sadio Mane’s first-half sending-off for a clash with Ederson. For 20 minutes, Liverpool traded blows with the future champions, bruising but not flooring them.

City might well have gone on to win regardless of the Senegalese’s controversial red card, but it provided Liverpool and their fans with a virtue that none of City’s other fallen opponents have been granted this season. It gave them an excuse, a reason to discount and disregard what was a crushing defeat.

‘Blues facing sternest test yet?’ asked City’s official website on Thursday, and it is difficult to argue to the contrary. Liverpool are on the longest current unbeaten run of any Premier League side, having gone 17 games without defeat in all competitions. The 4-1 loss to Tottenham was painted as a season-derailer, yet it has reinvigorated them. They were ninth after their Wembley humbling; they are now fourth, and back above Tottenham.

The defence has also improved immeasurably. Liverpool conceded three goals in that first-half capitulation three months ago. In their subsequent 17-game unbeaten run, they have conceded just one first-half goal in total.

But this is the first step in the club’s latest journey. “Players will come and players will go, that is football,” said Jurgen Klopp last week. “We have never been in a better position in recent times, as a club, to react in the right way. We will use our size and strength to absorb moments like this and still move forward.”

Many have criticised not necessarily the sale itself, but the timing of Philippe Coutinho’s departure for Barcelona. It is no doubt a calculated risk, and will be pinpointed as the exact moment Liverpool’s grip on a top-four spot loosened if they fail to qualify for the Champions League come May.

But history suggests that Klopp is now in his element, and Liverpool can cope without Coutinho. The Reds have lost just two of the 25 Premier League games the Brazilian has not started since February 2016. Coupled with the fact that no manager has beaten Guardiola on more occasions than Klopp (4), the hosts have more than a chance on Sunday.

After all, only once in the Premier League era have Liverpool been beaten at home by City. A Nicolas Anelka-inspired May evening in 2003 is the only occasion in 22 matches since 1992 that City have emerged as victors at Anfield.

But this side has made something of a habit of forming passing triangles around history and forcing it into submission this season. And as long as one of their 20 Premier League victories this season is tarnished by a supposedly poor officiating decision, they will be motivated to remove any blemishes.

Of the 16 remaining obstacles between them and a second Premier League ‘Invincibles’ season, this is their most imposing.

Player to watch – Jonjo Shelvey
Almost two years to the day that he left, Jonjo Shelvey had Swansea on his mind again. “I think they need to get back playing the way they played football,” said the midfielder of the Premier League’s bottom side. “They have chopped and changed the managers to be fair and I don’t think that has helped them.”

There is little tactical insight that Shelvey could provide as to his former employers. Carlos Carvalhal is the fourth permanent manager Swansea have appointed since Shelvey’s exit in January 2016. The Welsh side have transformed in that time, and not for the better.

But Shelvey does know it will be no easy task at St James’ Park on Saturday. “He’s always been a good manager,” he said of Carvalhal, the man who masterminded two victories for Sheffield Wednesday over Championship winners Newcastle last season. Shelvey’s most recent league goal came in the second of those games: a 2-1 defeat to Wednesday back in April.

As he, Isaac Hayden and Mikel Merino continue wrestling over two central midfield spots, Newcastle and Rafael Benitez will hope to extend the sort of record that is keeping their heads above water. The Magpies have earned all but one of their 22 Premier League points so far against clubs currently in the bottom half, the October draw with Liverpool the only exception. That run has to continue on Saturday.

Team to watch – Manchester United
It was news completely out of the blue, a proverbial bucket of cold water on a sleepy Thursday afternoon. It felt as though the race had been run back in the summer, but Manchester United made things interesting with a bid for Alexis Sanchez.

The likelihood is that this is United and Jose Mourinho at their nefarious best, attempting to throw the spanner in the works of what was once a smooth operation for Manchester City. Sanchez’s heart was set, but the offer of more money could possibly tempt the Chilean. It plants a seed, at the very least.

But even if the offer is not genuine and United harbour no realistic hopes of signing the Arsenal striker, it should be a shot in the arm for the rest of the squad. Jesse Lingard aside, no United forward is currently performing anywhere close to their ability. The looming shadow of winter signings might just change that.

Manager to watch – Arsene Wenger
Bournemouth, Brighton, Southampton, Watford and West Brom. So ends the exhaustive list of clubs with fewer Premier League wins than Arsenal over the last eight matches. Lost in a fog of constant referee complaints and swearing at Alvaro Morata is a run that leaves the Gunners as close in terms of points to fourth-placed Liverpool as they are to seventh-placed Burnley. And momentum is carrying them only one way.

Arsenal are currently sixth in the Premier League table, and in the latter stages of both the League Cup and Europa League. That sort of performance might suffice for certain managers – say, those of a Portuguese persuasion currently working in the northwest – but not for Wenger. An already depleted reservoir of goodwill is running almost dry after his recent public outbursts.

Jack Wilshere taking his usual seat in the treatment room means that West Ham (9) are the only club currently dealing with more injuries than the Gunners (8), who held Chelsea to a goalless draw in the Carabao Cup on Wednesday. A two-legged semi-final provided manoeuvrability in midweek, but there is no such room for error in the Premier League. Arsenal cannot slip up while their peers march on.

Sunday sees Wenger serve the last of his three-game touchline ban, and provides a return to Bournemouth in a repeat of one of the most underrated matches of the 2016/17 season. It was January last year when Arsenal scored three goals in the final 20 minutes to salvage a 3-3 draw at the Vitality Stadium. And if midweek is anything to go by, watching Wenger is more intriguing than any actual match anyway.

One-on-one battle to watch – Christian Eriksen v Morgan Schneiderlin
Having seen chairman Ralph Krueger publicly rule out the prospect of him joining Rickie Lambert, Luke Shaw, Adam Lallana, Dejan Lovren and Calum Chambers in leaving Southampton in summer 2014, Morgan Schneiderlin had had enough. He took to Twitter, complaining that ‘six years of an amazing journey’ at the club had been ‘DESTROYED in one hour,’ caps and all.

Schneiderlin had hoped to depart for Tottenham then, and was the subject of interest from the north London side again in summer 2016. Again he stayed, this time at Manchester United. Again, his frustrations were plain to see.

All has not gone to plan for Schneiderlin at Everton. He featured regularly under Ronald Koeman after joining in January 2017, but fell out of favour under David Unsworth. The midfielder was forced to deny he had been sent home from training for a ‘lack of effort’.

A year to the day that he moved to Goodison Park, Schneiderlin will hope to continue his recent renaissance against the club he once seemed destined to join. Tottenham are firmly in the hunt for a Champions League place, while Everton are winless in five. With the Wembley voodoo now a distant memory, the visitors will need all the help they can get.

Schneiderlin has been a somewhat surprising disciple for Sam Allardyce. No player has made more appearances for Everton (10) since his appointment. But his biggest test yet could come against Christian Eriksen on Saturday.

Football League game to watch – Sheffield United v Sheffield Wednesday
Imagine if in your first day in a new job, you are tasked not with making the drinks, but with sorting the accounts, organising the office Christmas party and telling Dave from advertising that he was being let go. A manager’s first game in charge of his new club is always a difficult one, but Jos Luhukay’s debut as Wednesday manager comes in the Steel City derby. Best of luck.

European game to watch – RB Leipzig v Schalke
“I’m going to ring Kloppo again now and tell him that he should go to Leipzig quickly and has to pick him up,” said Schalke sporting director Christian Heidel of Naby Keita on Thursday, with one eye on the trip to RB Leipzig this weekend.

It was undoubtedly a joke, but Heidel would not complain were Liverpool to act upon it. His side are second in the Bundesliga, yet just six points separates them from tenth-placed Hertha Berlin. The continued dominance of Bayern Munich is overshadowing a remarkably competitive German league.

Leipzig, their opponents on Saturday, are three places and two points below them in the table. An away win keeps Schalke second, while a draw or defeat means they could fall as low as sixth. The line between success and failure is as thin as ever.