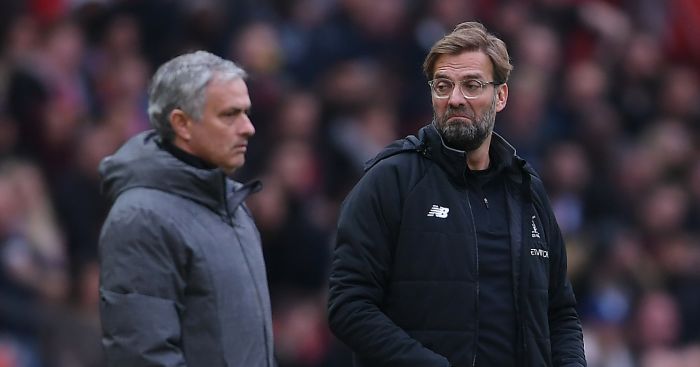 Game to watch – Liverpool v Manchester United
Never before in Premier League history have Liverpool been so far ahead of Manchester United directly before the two sides meet. The Reds could have long been removed from top spot by the time they host their bitter rivals on Sunday afternoon, but they will go into the game 16 points ahead of United regardless. Somewhere, somehow, David Moyes is crowing that even he was only 11 points behind when both sides faced each other in March 2014.

Then, Moyes was sacked within a month, and United ended the season staring down the barrel of a 20-point gap to Liverpool. It would feel like something of an achievement if both manager and club avoid eclipsing such failure come May.

Make no mistake: these two clubs have been further apart in terms of ability, ambition and excellence, but never in Liverpool’s favour. The always-superior United are barely a speck in the rear-view mirror as a side that finished below them last season has not only overtaken but lapped them.

Liverpool have sacrificed much of their forward flair for defensive stability, yet have still scored six more goals than United. They will visit Anfield having conceded five Premier League goals in December; Liverpool have let in six all season. Liverpool have conceded one league goal at Anfield since the start of March; United have kept three away clean sheets in that time.

It should, by all sensible measures, be comfortable. Liverpool are better in both defence and attack, as well as imperious at home and still unbeaten. Their goalkeeper is in better form, and they have a wider, more impressive range of midfielders. Manchester City are the closest side to the current leaders in terms of quality, and they swatted United aside at Old Trafford in November.

But this is precisely the sort of game that Jose Mourinho lives for. If any manager is capable of either spoiling a game through the use of parked automobiles, or upping it out of self-interest or sheer spite and contempt for his opponent, it is Mourinho. He has shown he can still nullify the best sides and frustrate the best coaches in a one-off game. Ask Manchester City, Juventus or even Chelsea.

Jurgen Klopp is the perfect example. The German has faced 26 different teams in the Premier League since being appointed Liverpool manager in October 2015. He has beaten 25 of them, with United the last pin to fall.

Liverpool’s United hoodoo predates their current managers. The Reds have not beaten their bitter rivals in the Premier League since that aforementioned game towards the end of Moyes’ tenure in March 2014. They have lost five and drawn three of their subsequent eight meetings, scoring four goals and conceding 12.

But that was the old Liverpool, one that wore both its heart on its sleeve and a suit of armour with far too many chinks. This new Liverpool is a cold-blooded, steel-plated side ready for any sort of battle.

Injuries have afflicted both teams, with Trent Alexander-Arnold and James Milner struggling late on against Napoli. Joe Gomez and Joel Matip’s absence will force the return of Dejan Lovren, giving United a potential weak point to target. Although, in Mourinho’s words, they “have lots of” fitness concerns of their own to contend with.

Player to watch – Whoever plays up front for Crystal Palace
Despite leaving the club in 2006, returning for four months in 2014, retiring from football altogether in 2015, and playing just one full season of top-flight football at Selhurst Park, Andy Johnson (21) has the most Premier League goals of any Crystal Palace striker since the start of the 2004/05 season.

Christian Benteke (18) is second and injured. Dwight Gayle (10) is third and joined Newcastle two-and-a-half years ago. Glenn Murray (8) is the only other Palace striker to score more than five Premier League goals in the last 14 years.

Roy Hodgson need not search far and wide for his biggest problem. Despite spending £45m on centre-forwards since the summer of 2015, Palace still lack a reliable focal point and onion-bagger. Huddersfield are the only club to score fewer goals this season, and their last league goal from a striker in open play came in January.

Wilfried Zaha has been used as an auxiliary centre-forward this season, but his suspension will force Hodgson into a rethink against Leicester. Alexander Sorloth could finally be trusted from the start, Jordan Ayew might be handed a rare bow, or perhaps Connor Wickham will complete his long-awaited return from injury. The manager has options, and will be forced to actually choose them this time.

Whoever Hodgson backs to lead the line, Palace need a result. If they fail to win, it would be the first time they have fewer points than the same stage last season. And considering the horrible start Hodgson had to rescue them from in 2017/18, that really is quite something.

Manager to watch – Rafael Benitez
August to October was marked by a ten-game winless run. November saw three victories from three games. December has delivered one draw and two defeats thus far. Newcastle have been streakier than a dodgy fake tan this season and have probably cost just as much.

There are precious few teams that last excuse does not wash with; Huddersfield are one of them. The Terriers spent more than their Magpie cousins for the second consecutive summer, but only through necessity. Before Cardiff’s promotion, David Wagner was playing catch-up with the rest of the Premier League when it came to the quality of his squad.

Newcastle’s squad is hardly perfect, but it is better than Huddersfield’s. They have a more reliable goalkeeper and far greater attacking options, with a similarly solid midfield and defence. And they also have a Champions League and La Liga-winning coach, as opposed to a two-time Championship Manager of the Month.

It is a theoretical mismatch. Huddersfield always look to level the playing field at the John Smith’s Stadium by negating individual brilliance and highlighting spirit, togetherness and organisation. But Benitez is Newcastle’s ace in the hole, their not-so-secret weapon that has to decide finely balanced games such as these.

The Spaniard is the best and one of the most experienced managers in the bottom half. Newcastle have not benefited from that advantage often enough this season. They have won just one of their last ten Premier League games in December, and really ought to improve that record come Saturday.

Cardiff might well defy history; they might have no choice. Their last away league win came in April, and no side has scored fewer away goals this season (3) in the top seven levels of the English football league system. Neil Warnock’s side have given themselves a fighting chance with their fine home form, but as defender Joe Bennett noted earlier this month: “We’ve been struggling away from home where it’s obviously difficult to get points.”

If that is ever to be rectified, Watford could provide an unlikely source of comfort. The Hornets started brilliantly but have not won in their last six Premier League games, with only Southampton (12 games) on a worse run. It is time for Cardiff to put their feet up, raid the fridge and make themselves at home somewhere away from south Wales.

Football League game to watch – Derby v Nottingham Forest
While Norwich and Leeds are busy being bad for English football away at Bristol City and Bolton respectively, and Oliver Norwood is proving he is the Championship’s best player against West Brom on Friday, all eyes will be on Pride Park on Monday. The Brian Clough Trophy will not be the only potential reward on offer.

Derby will host Nottingham Forest with a closely guarded advantage of three points and three places. Frank Lampard has quietly guided the Rams into fourth with a run of six wins in nine league games. But Forest, powered by the goals of Lewis Grabban and the creativity of Joe Lolley, are not far behind.

A Derby win helps close the gap to an imperious top two. A Forest victory takes them one step closer to the play-offs and the next stage in their ambitious progression. A draw, and two sides who have proven difficult to beat remain precisely so. Both managers were appointed this year; can Aitor Karanka get the better of one of the few managers  whose playing achievements dwarf his?

European game to watch – Torino v Juventus
If the Old Lady was stunned by Young Boys in midweek, they might be reporting their closest neighbours to the local authorities over noise control this weekend. Juventus are unbeaten in Serie A, drawing just one of their 14 games, but Torino will be just the second top-half side they have faced away from home.

Massimiliano Allegri’s side scored in the first and last ten minutes as they strolled past fourth-placed Milan at the San Siro last month. But Torino will be a different prospect: they have lost just one of their last 11 Serie A games, and only three sides have conceded fewer goals this season.

Juve can afford for their European stumble to become a domestic slip – they have an eight-point cushion on second-placed Napoli – but they will be eager to return to form, maintain that gap and stall a rival’s momentum, all in one fell swoop.