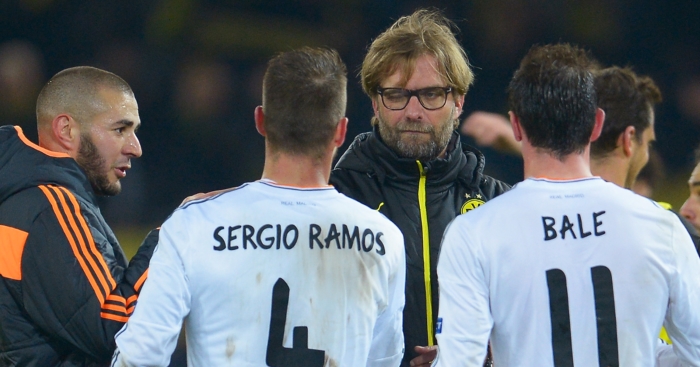 Game to watch – The bloody Champions League final
It does not take a missile technologist to see that much has changed since Liverpool last faced Real Madrid. In the three-and-a-half years since their last meeting, the former have changed managers once, while the latter have done so twice. Liverpool have won no trophies, while Real have won six. Liverpool have gone from sixth to eighth before consecutive fourth-place finishes, while Real have never slipped below third. By any metric, this should still be a complete mismatch.

Brendan Rodgers ensured that would be the case back in November 2014. A starting line-up captained by Martin Skrtel, featuring Javier Manquillo, Lazar Markovic and Fabio Borini, were lambs to the Bernabeu slaughter. Steven Gerrard, Raheem Sterling and Philippe Coutinho watched from the bench as the hosts sleepwalked to a 1-0 victory.

“I didn’t see this as a big showcase game where I had to play the so-called names,” said Rodgers after the match. “It might have seemed a gamble but for me it wasn’t.”

Liverpool could not have felt further from Europe’s top table. The journey to a first Champions League final in 11 years has been arduous and often torturous, but the finish line is rather unfathomably in full view. That their opponents in Kiev are Real brings the transition full circle.

Jurgen Klopp and Liverpool are in no doubt that they are well ahead of schedule. If the plan was sustained progress, this season has been one giant leap for Merseysidekind when the expectation was one small step for Anfield. Advancing past Hoffenheim and reaching the group stages was the initial target; anything beyond that was seen as a bonus.

But that does not mean Liverpool will be there to make up the numbers on Saturday. Expectations change with perception, and the perception of Liverpool is that they are the Champions League’s top scorers, having scored at least five goals against every side they have met thus far. Sure, the trophy is Real Madrid’s, but if any team can finally prise the silverware from Zinedine Zidane’s iron grip, it’s Liverpool.

Klopp is not the kind of man who dwells on the past, but his record of three wins and one draw in six games against Real does at least suggest he knows how to handle the Galacticos. But the opposite dugout will be inhabited by a fresh face.

Zidane stands on the brink of history. Bob Paisley and Carlo Ancelotti are the only two managers to win the European Cup three times. Zidane could join them in his third season as a manager. It is ludicrous to even consider that 90 minutes separates him from coaching immortality, such is the precarious nature of the Madrid job.

The key to Real’s consistency has been the relative lack of change in the squad. Sergio Ramos, Raphael Varane, Marcelo, Toni Kroos, Luka Modric, Isco, Cristiano Ronaldo and Karim Benzema all started in that game against Liverpool in November 2014, and could all do so again in May 2018. There will be no Liverpool survivors; Simon Mignolet, Alberto Moreno, Emre Can and Adam Lallana will be grateful of a place on the bench.

That is the transformative effect Klopp has had on this squad since taking over. Real’s progression to Saturday’s showpiece has been as linear as possible, while Liverpool have taken the most scenic of all the routes. You would not bet against either arriving at their final destination first.

Player to watch – Mohamed Salah
A glut of individual honours will keep Mohamed Salah off this ignominious list regardless of the result in Kiev, but the Egyptian craves (and deserves) more than PFA Player of the Year awards. Salah has ensured to stress the importance of the team in each acceptance speech, and so must do his utmost to deliver a trophy the entire dressing room can share.

The record-breaking goal against Brighton on the final day of the Premier League season was certainly well timed. Such is the sheer ridiculous nature of Salah’s success that a three-game run without a goal or an assist was starting to look positively barren. The goals also tend to come in bunches: his only goal not to come in consecutive games this season was in August.

Salah has faced 25 teams in all competitions this season, scoring against 23 of them. Only Swansea and Manchester United have managed to keep him out, and he assisted two goals against the former in December. Unless Real Madrid bend the UEFA rules a little and loan in Ashley Young, Salah will be a constant danger.

Team to watch – Real Madrid
If good things truly do come in threes, European football has never really abided by that rule. The European Cup has been won three consecutive times by just three teams. Real’s dominance in the 1950s will never be matched again, but the other two instances happened in the space of six years.

After Ajax ruled the continent with Total Football from 1971 to 1973, Gerd Muller, Franz Beckenbauer and Bayern Munich sat atop their throne from 1974 to 1976. Only four teams have won back-to-back European Cups since two sides won three in a row in one decade.

Real could somehow complete such an incomprehensible treble. This season has seen the cliché of ‘lucky Zidane’ in excelsis, with Juventus unable to complete a memorable comeback, and Bayern unfortunate to fall at the penultimate hurdle. The quarter and semi-finals were both won by just one goal on aggregate.

Zidane has achieved something quite phenomenal already at Real. They have won the Champions League in three of the last four seasons, yet only felt like Europe’s best and most complete side last campaign. The flaws will be forgotten and their names etched in history if they can match Ajax and Bayern’s hat-tricks.

Manager to watch – Steve Bruce
In a season that has done everything to accelerate the extinction of the great British manager, Steve Bruce has provided a rare antidote. Alan Pardew, Paul Lambert and Sam Allardyce are all out of work, David Moyes has helped restore his reputation but must now wait for his next job, and Mark Hughes kept Southampton up but was at least partly to blame for taking Stoke down. The firefighter has never been more out of fashion.

Bruce even took the opportunity to prove himself the superior member of a dying breed in the play-off semi-finals. Middlesbrough and Tony Pulis may have been a daunting prospect, were it not for the Welshman settling for a draw when a goal down in the second leg. It was a questionable approach.

For Bruce, it was relief in a difficult season. To guide a team towards promotion is a particular kind of pressure, but cannot compare to the personal devastation the 57-year-old has endured. The loss of one parent is a terrible tragedy; the loss of both in the space of three months is earth-shattering.

The mental strength and resolve to not only cope with such trauma at a private level but to maintain a professional and dignified air in the most demanding public sphere of all is impossible to comprehend.

The importance of Aston Villa’s game with Fulham has been forced into uncomfortable perspective as a result, and matters little in the grand scheme of things. But for Bruce, victory at Wembley has taken on an entirely new meaning.

The Portuguese netted twice in that win, and Van Dijk must find a way of stopping the 33-year-old 11 months on. Ronaldo has won four and scored in three of the five Champions League finals he has taken part in, with only Barcelona in 2009 proving capable of stopping him in his tracks. For a player who started the season at Southampton, it is a gargantuan task.

But this is the sort of occasion Van Dijk was signed for. Both he and Klopp made sure to distance themselves from “the price” of his January arrival for a reason: a £75million fee demands a certain kind of performance on a certain kind of stage. With that sort of figure comes the expectancy of something extraordinary – stopping Ronaldo’s European domination fits that bill.

It will not be their first meeting. Van Dijk nullified Ronaldo to the point that he was substituted in the 68th minute for Portugal against the Netherlands in March without having a single shot on goal. That was an international friendly; this is anything but.

The suggestion is that Ronaldo will be up against Trent Alexander-Arnold, and while that would make for an absorbing storyline, he drifts central whether or not he starts on the left-hand side of the attack. The battle will be between the Portuguese and Van Dijk more often than not.

“He is one of the best players in the world at the moment but I need to deal with him like the rest of the team needs to deal with their other players,” said Van Dijk earlier this week, a succinct review of his main objective. The centre-half’s valuation is befitting of the elite. It’s time to prove it.

Football League game to watch – The bloody Championship play-off final
While it seems like an obvious, fitting Championship play-off final, with third facing fourth at Wembley, it was unthinkable not long ago. Fulham were 18th when they appointed Slavisa Jokanovic in December 2015, while Aston Villa were 19th when Steve Bruce was given the reins in October 2016. Perhaps Hull and Birmingham ought to hedge their bets?

There is not a great deal between these sides. Fulham won one more game and lost three fewer than Villa in the regular league season, scoring seven but conceding four more. Villa won back in November, while Fulham prevailed in February. The margins are tight, the difference negligible.

Both sides will cling to even the slightest advantage. Villa fans will take solace in Bruce’s promotion record. Two of his four escapes from the second tier came through the play-offs, legitimising his claim that his side have enjoyed an “absolutely ideal” week of preparation.

Jokanovic will still fancy his chances. Fulham supporters will not remember their first season back in the Championship fondly, but that was the campaign the Serb inspired Watford to the promised land. They will hope he can repeat the feat at Wembley on Saturday.

Perhaps the greatest disparity will be in age. Ryan Sessegnon (18), Aleksandar Mitrovic (23) and Sheyi Ojo (20) have been crucial for Fulham, while Albert Adomah (30), Robert Snodgrass (30) and John Terry (37) have helped inspire Villa. Even Bruce, a paid member of the English management old school, has eight years on the fresher, more tactically astute Jokanovic. Will youth or experience prevail at Wembley?

European game to watch – England U21 v China U21
Can England retain the Toulon Tournament trophy? Can Lewis Cook guide yet another international youth team to glory? Can Aaron Ramsdale save any penalties? Can Tammy Abraham justify his senior cap? Can anyone handle Eddie Nketiah? Will China’s manager taunt Aidy Boothroyd over his tendency to play long ball? Will you watch the match?

In order: Yes, yes, probably, no, definitely not, hopefully and absolutely. You have no reason not to.