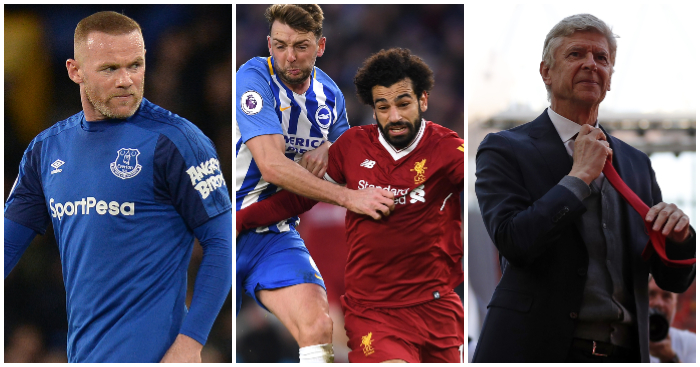 Game to watch – Liverpool v Brighton
The final weekend should be the most anticipated of the season but, once again, it looks like a Premier League dud. Aside from a few extra quid from the prize money pot, there are only two things to play for and both appear foregone conclusions.

Swansea need Southampton to get absolutely pummelled by Man City while they turn over Stoke to avoid relegation, but the Saints are safe and they know it. The only other matter yet to be settled is who will take the final Champions League place, though Liverpool need only a point at home against a Brighton side sitting safely and snuggly in 14th place.

It should be a straightforward mission again for the Reds, who had the same task last season when they faced a side with nothing to play for at home on the last day to secure a Champions League place.

Of course, against Middlesbrough a year ago, Jurgen Klopp’s men did not have a looming Champions League final to divert their attention. And their exploits in Europe certainly have affected their domestic focus this term, with last week’s defeat at Chelsea taking their total points dropped immediately after European ties to 21.

Klopp doesn’t need to be wary of a hangover this week, rather the anticipation of the Kiev trip. The Champions League final understandably has become the focus of red minds on Merseyside but there is a job to be done first – and the manager has tried to emphasise that.

He has certainly tried to refocus his players on the more immediate domestic tasks of late but his rallying calls have fallen on deaf ears. It is understandable that Klopp’s men have Real Madrid on their minds but not acceptable that their concentration slips to the point where Chelsea can still sneak through the top four door. Liverpool have so much to gain in the next fortnight but still so much to lose if the next two matches do not go according to Klopp’s plan.

Kiev is still two weeks away but the Seagulls are incoming. After their win over Manchester United last week, they go to Anfield motivated to perform on such a stage but free of any pressure which makes them an unpredictable opponent and a perhaps a dangerous one.

This meeting, though, is all about Liverpool’s attitude and their performance. Not since the 5-2 demolition of Roma has the front three really clicked, with no wins, no Premier League goals and two defeats following that Anfield night. If Liverpool want more of those occasions next season, then Brighton, not Real, must be their absolute focus this weekend.

Team to watch – Southampton
The celebrations that greeted Tuesday night’s huge win at Swansea suggested that Southampton weren’t going to waste much time worrying about the remote possibility that they could yet get sucked into the Championship. For that to happen, Swansea need to pick themselves up off the floor to beat a similarly dispirited Stoke, while Saints would have to cave in spectacularly upon the visit of champions Manchester City.

You might have put money on City putting five past Southampton at some point during the season, but probably not now on the final day, when City are easing off the gas while Mark Hughes’ side seem to have finally found the accelerator. Two wins and a couple of draws in their last four have saved their skin and the manager has taken much of the credit.

The Saints players do seem to have taken to Hughes and his “positivity”. Which makes you wonder if Sparky has changed, or whether Mauricio Pellegrino really was that dull. Either way, Hughes seems to be well placed to get the job on a permanent basis, and it will be interesting to see how the squad progresses once the new manager novelty has worn off.

More immediately, their approach against City will be similarly interesting to observe. Saints have not conceded the opening goal in the Premier League since his first match in charge at West Ham. Might an early City goal remind them of their mental frailties, or will they be so buoyant as to stop the champions reaching 100 points?

They almost certainly won’t be going down, but for the sake of some final day excitement, it might be fun for those of us who are not Saints if they were at least made to sweat a little…

Player to watch – Wayne Rooney
Almost 16 years – half Rooney’s lifetime – after it started, are we about to witness the end of the Everton star in the Premier League?

Reports have strongly suggested he could be off to MLS this summer, with Rooney apparently as fed up as most Evertonians with life under Sam Allardyce. But unlike the fans, the skipper has the option of putting 3,000 miles between himself and the manager.

Despite the fact that he remains Everton’s top scorer on 11 goals, the last of which came in December, Rooney’s exit from the Premier League stage has been playing out for a couple of seasons, with the sub-plots of becoming Manchester United’s greatest goalscorer and returning to Goodison Park distracting some from the reality that the England record holder’s star is waning.

That is not to say that he has not been an asset to Everton this season. Among his 10 Premier League goals have been strikes that have been the difference for nine points, including winners against Stoke and Newcastle, while Rooney also scored equalisers at Manchester City, Liverpool and Brighton. The hat-trick against West Ham was also a delight. But his declining influence and contribution over the second half of the season as Allardyce got his feet under the table suggests the time might be now if the 32-year-old wants the pick of his projects abroad.

A dead-rubber at the London Stadium might not have been the scene he would have chosen to bring down the curtain on his Premier League career, but a decade and a half in the brightest spotlight suggests Rooney will make an eye-catching exit, if this is indeed his final show.

Manager to watch – Arsene Wenger
So this is goodbye. After his Emirates farewell last weekend, Arsenal are enduring one final road trip with Wenger who, despite all the recent well wishes, is presumably as fed up with his side’s away form as the fans are with him.

The Gunners are yet to pick up a single point away from home in 2018, though at least Huddersfield offer ideal opposition for the Arsenal players to give their manager something that resembles a send-off.

The Terriers secured their Premier League survival in midweek and duly went on the piss. Good for them. David Wagner wasn’t even pretending that his side will approach the visit of Arsenal with total professionalism and motivation.

“We will do whatever they say for the next 48 hours” he said after giving his players permission to celebrate their achievement. “We will then play with total freedom in our final game and give Arsene Wenger all the focus he deserves.”

It will be a celebration at the John Smith’s Stadium and, like Leicester supporters on Wednesday, the Huddersfield fans will probably bid him a fond farewell. But Wenger will probably enjoy it as little as he appeared to at the King Power Stadium if his players perform what has become a customary party trick for all their hosts this year.

One-v-one battle to watch – Mo Salah v Lewis Dunk
Salah is in the midst of a goal drought, if you take his three-game barren run in the context of the rest of his season. Klopp put his last two blanks down to facing former sides – Roma gave him a tough time physically, apparently, while Chelsea allowed him no space. That hasn’t stopped Salah before, as Klopp alluded to, but his contribution certainly appears to have waned in recent weeks.

Sunday would be the perfect time to rediscover some goalscoring form, with Liverpool in need of just a point to finish in the top four, while the Egyptian would doubtless prefer it if he didn’t have to go to Kiev having not scored in over a month by the time the Champions League final rolls around.

In his way stand two of the Premier League’s most robust centre-halves in Dunk and Shane Duffy. The Seagulls shut out Salah at the AmEx back in December but they were rather less successful in dealing with his team-mates in a 5-1 defeat to the Reds.

Dunk and Duffy’s contribution to Brighton’s survival cannot be understated. They lead the way for most blocks in the Premier League, while Duffy also the leads the clearances charts. Dunk picked out Sergio Aguero as his toughest opponent this season, while Duffy identified Harry Kane – two strikers who play up against the centre-halves. This is not where Salah thrives, but he appears to have been starting more centrally of late.

If Salah, who is three clear of Kane in the Golden Boot race but four short of Ian Rush’s Liverpool record, reverts to his more profitable route to goal then Dunk and his mate should brace themselves for a different type of battle.

Football League game to watch – All of them
There’s no Premier League action on Saturday but Sky Sports have allayed whatever fears any of us may have had about having to spend any time with family or possibly being exposed to daylight.

Scunthorpe and Rotherham kick us off at 12:30pm in a fourth v fifth League One play-off semi-final before Lincoln against Exeter acts as the appetiser for Middlesbrough’s clash with Villa. If the sight of Adama Traore running at John Terry hasn’t quenched your football thirst, then Coventry versus Notts County kicks off at 7:30pm.

When Saturday comes, the play-offs will already be in full swing, with Derby and Fulham taking place on Friday night after Charlton and Shrewsbury kicked us off on Thursday. Either the Shrews or Addicks will be the first team to reach Wembley, with their return meeting taking place immediately after the Premier League’s final round on Sunday. The five other second legs are then stretched out, one per evening, all the way to next weekend.

European game to watch – Roma v Juventus
Serie A is the last of the big European title races to be settled, though Juventus are awaiting only absolute confirmation of yet another Scudetto. With two games to go, the Old Lady sit six points clear of Napoli, who need a 16-goal swing to deny Max Allegri’s side.

Juve go back to Rome on Sunday night looking for the single point that would make them the first Italian side to complete four consecutive Doubles following their 4-0 humbling of AC Milan at the Stadio Olimpico on Wednesday night. It is a stunning achievement that “only men with a capital M can do”, according to Gigi Buffon. Indeed.

But Roma won’t be a willing patsy for Buffon and co. They can seal a Champions League place for next season by beating Juventus, but there is a good chance that they will kick off in fourth place, perhaps only a point clear of Inter Milan. Roma certainly benefit from the fact that Inter and Lazio meet on the final day but they need two more points from this weekend and the trip to Sassuolo to make their rivals’ results immaterial.