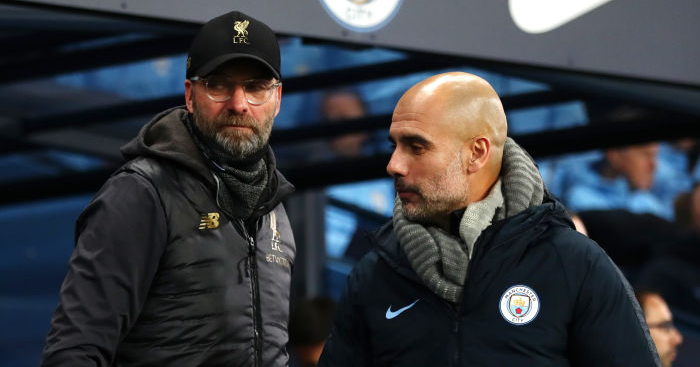 Games to watch – Brighton v Manchester City and Liverpool v Wolves
If, at 9.20pm on Monday evening, you had said that Liverpool were outsiders to win the Premier League title yet favourites for the Champions League, you would have been mocked and derided as an ignoramus and a fool. Manchester City were struggling to break down an impressive Leicester side less than 24 hours before Barcelona arrived at Anfield with a three-goal advantage and a Quadruple in mind.

Then Vincent Kompany happened, as did ‘football’s greatest game‘ in this greatest of weeks. The stakes are higher than a mountainside restaurant and the drama has been of a similarly lofty standard.

There will surely be nothing of the sort on Sunday. Manchester City are in the midst of the third-longest winning streak in Premier League history, and visit a Brighton side that have won twice this calendar year. City have earned more points since the start of February (39) than their opponents have all season (36).

One more victory would secure another slice of history for both club and manager. City would become the first side to defend their title since 2009, drawing level with Sunderland and Chelsea overall on six. And only six bosses have won consecutive post-war English league championships. Pep Guardiola and his players have been overshadowed in Europe, but their domestic dominance cannot be ignored.

Liverpool still believe there is a chance – they just beat Barcelona 4-0 with Divock Origi and Xherdan Shaqiri leading their bloody attack – so will fight until the possibilities are no more. But Wolves are far from the easiest obstacle to overcome, and they will want to complete their seasonal collection of Premier League scalps.

The dynamic drastically shifted two Sundays ago, then again last Saturday, Monday evening and Tuesday night. The title was in City’s hands, then Liverpool’s, and is now within City’s grasp again. Both teams have finals to prepare for and momentum to maintain as they seek to avoid these phenomenal seasons being tainted by glorious failure. Could this campaign really end with neither of the top two dropping points since March 3?

Player to watch – Mason Greenwood
“I hope you don’t kill me when you see my team,” said Jose Mourinho. “I hope the fans at Old Trafford support the team, they forgive some naivety, they forgive some lack of confidence and I hope Big Sam shows he’s a good friend and he goes slow. Tell Wilfried Zaha to go slow, leave Christian Benteke at home. I hope he goes soft on us.”

Replace “Big Sam” with medium-sized Neil, swap Wilfried Zaha for Josh Murphy and exchange Christian Benteke for Oumar Niasse, and Ole Gunnar Solskjaer finds himself in a similar position. Manchester United are sixth with nothing to lose and little to gain at home to a lowly team in the same predicament.

United, of course, had a looming Europa League final to contend with when they closed their domestic season against Crystal Palace in 2017. There will be nothing of the sort on the horizon when they welcome Cardiff on Sunday, but the approach should not change from two years ago.

It remains the third-youngest starting XI in Premier League history. Mourinho handed out five full debuts and fielded two teenagers in a 2-0 victory as the perennial United demand for exciting attacking football and youth development was satisfied to the highest possible degree.

The only youngster to use that platform to establish themselves in the first team in the two years since has been Scott McTominay. But Solskjaer will hope that any of Angel Gomes, Arnau Puigmal, Tahith Chong, James Garner and Dylan Levitt – each of whom trained with the full squad this week – can take one final chance now before next season.

It is no secret that Mason Greenwood is the most exciting member of this latest class. He has scored 26 goals and assisted eight in 26 games at various youth levels this season, playing a combined 28 minutes of Premier and Champions League football as a substitute.

With Romelu Lukaku injured, Marcus Rashford broken, Anthony Martial struggling and Alexis Sanchez too busy growing excellent facial hair, a full debut or lengthy cameo for the newly-crowned Young Player of the Year would be one last injection of feel-good promise before a daunting summer.

Manager to watch – Mauricio Pochettino
While the ‘masterful man-manager with tactical acumen’ prepares to take the only team in the Premier League’s top six not in a season-closing final into a meaningless last day, the coach ‘who is focusing on Champions League qualification’ welcomes Everton with their Merseyside rivals at the forefront of his mind.

The natural Tottenham reaction to reaching the Champions League final is to wonder how they might mess it all up. Losing to Liverpool in Madrid after Arsenal pip them to fourth and Chelsea win the Europa League sounds about right.

But Pochettino’s side broke free from their own shadows on Wednesday, and no longer have to view everything through a pessimistic, fatalistic prism. They can look forward with anticipation instead of apprehension.

Losing their grip on the final Champions League qualification place would be the Spursiest of all the Spursy things. They are currently three points ahead of Arsenal with a considerably better goal difference. It would require Everton and Arsenal wins and an eight-goal swing in the Gunners’ favour to change that.

Pochettino will still be wary of safeguarding against such a collapse, even if only to harness their current positive energy for as long as possible. The Champions League final is in just over three weeks, and consecutive wins for the first time since April 13 feels like a fine way to steady themselves before the grand occasion.

Team to watch – Watford
When Watford beat Wolves in the FA Cup semi-final last month, they were one point behind seventh-placed Leicester and on course to reach the final and finish in the top half of the top flight for the second time in their history.

Javi Gracia’s side have since lost to Arsenal, Wolves and Chelsea, drawn with Southampton and beaten only Huddersfield, falling seven points behind seventh place and edging towards the bottom half. Defeat at home to West Ham would drop them down to 11th.

It is essentially meaningless in the grand scheme of things, but Watford will also want to foster as much belief as possible before they return to Wembley to face Manchester City. A first clean sheet since February might be a decent place to start.

Football League game to watch – The bloody play-offs
Take your pick from any of the following, all on the Sky Sports Football channel:

The first leg of the West Midlands derby between Aston Villa and West Brom (Saturday, 12.30pm).

The first leg of the El ClasiMole between Derby and Leeds (Saturday, 5.15pm).

The first leg of the ‘Oh, they used to be in the Premier League, didn’t they?’ megaclash between Sunderland and Portsmouth (Saturday, 7.30pm).

The first leg of the ‘We both play in red’ super showdown between Doncaster and Charlton (Sunday, 12.15pm).

The second leg of the intercontinental tussle between Mansfield and Newport, finely balanced at 1-1 (Sunday, 6pm).

The first (Friday, 7.45pm) and second legs (Monday, 7.45pm) of the spark at Prenton Park and the battle between brains and brawn at The New Lawn between Tranmere and Forest Green.

Isn’t it just so bloody exciting?

European game to watch –
Two points separate Benfica and Porto in the Primeira Liga with two games remaining. Galatasaray and Istanbul Basaksehir are level on points at the top of the Super Lig with three games left. Bayern Munich have a four-point Bundesliga gap over Borussia Dortmund, but face third and fourth-place in their final two matches.

The destination of the Spanish, Italian and French top-flight titles has already been decided, but the Eredivisie still hangs in the balance. Ajax and PSV are level on 80 points, with the former holding a ten-goal advantage heading into the final two games.

It remains to be seen what effect their Champions League capitulation will have. Their run-in is easier, taking in games against FC Utrecht (5th) and De Graafschap (16th), while PSV face AZ Alkmaar (4th) and Heracles (6th). But it will take a gargantuan effort to forget the events of Wednesday evening.

One slip from either of two of Tottenham’s European victims will surely end their pursuit of the crown instantly. Will Ajax win their first title since 2014, or will a dramatic end-of-season collapse open the door for PSV’s successful defence?