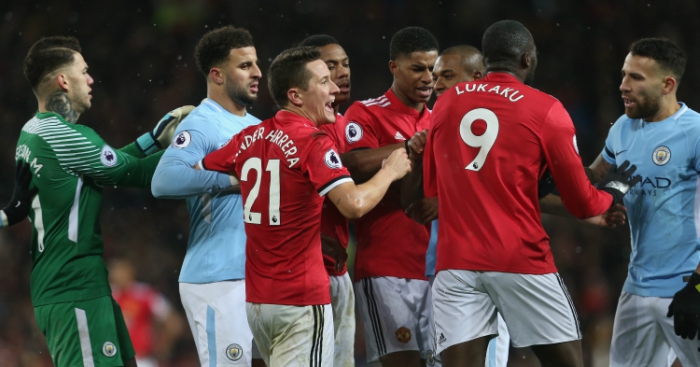 Game to watch – Manchester City v Manchester United
Anybody lazily thinking that Manchester City will be under-motivated for this match – particularly on the back of a 3-0 humbling at Anfield – is the most foolish of fools. Let’s run through a few of the reasons…

1) They can win the title. Regardless of the opposition, winning the title is pretty sodding exciting.

2) There are a whole wealth of records they can still break this season. And managers and players bloody love records. For a full list click here.

3) They will definitely not want to sacrifice an unbeaten Premier League home record. Especially not to those red muppets down the road.

4) They absolutely need to change the narrative after Wednesday. They need to restore momentum and restore confidence. They have to flip the switch.

6) They really do owe the fans after that sh*t-show at Anfield.

8) Did we mention they can win the title?

Add Manchester United’s desire to spoil the party while simultaneously putting down a marker for next season, and this is no damp squib. This will be proper.

For a full tactical preview, read Alex Keble’s excellent piece. He seems to think that United will have a chance if they choose pace. Liverpool did show them the way, after all.

Player to watch – Harry Kane
“He’s obviously got a bit of a head start now, and we’ll see what happens. I can’t control what he does, so I’ve just got to make sure I prepare well for games and just be ready.”

Harry Kane could not control Mo Salah, but if he could control Mo Salah, he would have him suffer a slight groin strain just severe enough to give Kane the time to bridge the five-goal gap that opened in the Golden Boot race while the England man was injured. Do not think for a second that Kane is not interested in a third consecutive Golden Boot (insert your own joke here about it being the only trophy he can win); he bloody loves scoring goals and making records.

The good news for Kane is that Tottenham travel to Stoke this weekend and Kane himself has scored eight goals in his last four games against the Potters while Tottenham have emerged with a 17-1 aggregate win from that quartet of shellackings. If we were gamblers (if?) we would be putting money on a Kane hat-trick against a Stoke side that has not managed a win since January.

After 21, 25 and 29 Premier League goals in the last three seasons, Kane will be on a mission to hit 30. Sadly/admirably, it’s probably pretty much the only thing in his head.

Team to watch – Liverpool
Really it’s always Liverpool. But it’s particularly Liverpool after that breathtaking performance on Wednesday night, and against an Everton side who will be keen to salvage something other than a stomach ulcer out of this desperate season.

Unlike City, Liverpool’s motivations are rather a lot slimmer and they really could field a weakened team after the lung-busting efforts at Anfield. We could see a long-awaited return from Nathaniel Clyne, a rare outing for Alberto Moreno and a striker spot for Dominic Solanke. Jordan Henderson will surely play as he is suspended for the Champions League second leg, but will Jurgen Klopp want to risk Roberto Firmino, Sadio Mane or Alex Oxlade-Chamberlain ahead of Tuesday? He may have no choice but to risk his central defensive pair, though fears of a Virgil van Dijk injury could mean an unlikely derby debut for Conor Masterson.

Whatever their personnel, Klopp’s teams are never anything less than watchable. They press, they thrill, they score goals. Along with Manchester City and Tottenham, they have made this season a whole barrel of fun. We will be watching once again.

Manager to watch – Mark Hughes
The bad news for Southampton fans is that Mark Hughes has never won at the Emirates. And he’s been more than a few times. The good news is that he will have rarely played against a less-motivated Arsenal side, marooned in sixth and sandwiched between Europa League quarter-finals that offer their only route back into the Champions League. If there was ever a time to beat Arsenal at the Emirates, it is surely now. With just seven games left for Southampton in an increasingly desperate relegation battle, there is no fixture that they can afford to write off as unwinnable.

To borrow one of Daniel Storey’s favourite phrases, being a manager with two teams in the bottom three is ‘not a good look’. Worse, it’s an absolutely awful look. Surely even Hughes cannot emerge with his reputation intact if both Stoke and Saints go down at the end of this season? We know the answer to that, of course, no matter how much we might dream that this season is a watershed for old British managers.

For more on just how poor Southampton were against West Ham last week, click here. And if they could be so easily destroyed by Marko Arnautovic, just imagine what Pierre-Emerick Aubameyang (four goals in three games) could do; he’s one Arsenal player still very much motivated.

Come on Sparky, you said that you “don’t do relegation”. It really is time to prove it.

One-on-one battle to watch – Pascal Gross v Jonathan Hogg
Now this might be the game most of you scroll through on Match of the Day, but this clash is absolutely sodding massive for Brighton and Huddersfield. For Brighton, the chance to move to 37 points, which would pretty much guarantee another season of Premier League football. For Huddersfield, the opportunity to pull themselves away from the relegation zone; if Stoke are given an expected tonking by Spurs on Saturday afternoon, the Terriers could end the day six points clear of the bottom three. Speaking as a Town fan, that sounds like an enormous gap considering the stripey sh*te below.

A lot will depend on whether Town can stop Gross – one of the season’s best signings. As he has stalled against Everton and Leicester, so Brighton have stalled…though Gross may disagree about the chicken/egg nature of his form dovetailing with Brighton’s.

“I’m quite happy with how the season has gone for me, but I can only do it when we’re playing well as a team. Come the end of the season, I’ll only be happy if we’ve stayed up,” he said before Brighton fell to defeat at home to the Foxes, when Gross was ably shackled by the excellent Wilfred Ndidi.

Responsibility for keeping him quiet this Saturday will fall at the feet of workhorse Jonathan Hogg, whose “performance this season has been extraordinary and on the highest level”, according to manager David Wagner, who just about stopped himself from saying “come on, if Jake Livermore can get in that England squad…”.

Football League game to watch – Cardiff City v Wolves
Championship football really does not get better than first v second, or ‘best attack’ v ‘best defence’ if you prefer. It’s live on Sky Sports on Friday night and we’re not sure we need to say much more. Oh okay, we will point out that with Cardiff just six points behind with a game in hand, this clash decides whether the end of the season brings a promotion parade or a title race.

Neil Warnock will want this to be ugly.

Neil Warnock named as Championship manager of the season ahead of Nuno. Both done incredible jobs but think that's fair enough given respective squads/budgets?

European game to watch – Real Madrid v Atletico Madrid
Another day (Sunday), another derby, and this one could be a cracker. Now usually, a Real Madrid not chasing the title might rest the likes of Ronaldo, Toni Kroos and Luka Modric in the league clash between Champions League quarter-final legs. But this is Atletico Madrid and no self-respecting Real manager would rest players at home to Atletico, especially when the eventual prize might be acceleration past Diego Simeone’s men in the table.

Zidane has not faced any other foe more often than Simeone in his still-nascent managerial career. He should not be comfortable that he has only twice beaten him over 90 minutes in seven attempts. Watch…if only to see Ronaldo attempt THAT overhead kick again.