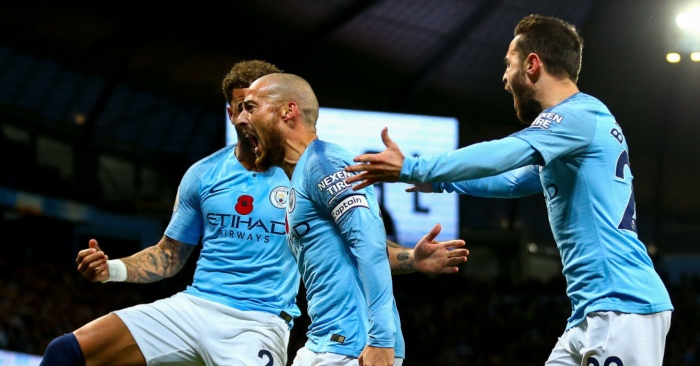 Game to watch – Manchester City v Manchester United
“United results against the best teams this season have been good. Chelsea, Liverpool, Leicester. For the way they play it is easier for them. They are not afraid to have a defensive approach. It is easier for them against better teams, against teams who want more of the ball,” said Jose Mourinho. And he really should know about the advantages of a defensive approach. And it really wasn’t a dig, but rather an expression of envy that the one thing Ole Gunnar Solskjaer has perfected at Old Trafford is the art of competing with better sides. They have won two and drawn two of their four matches against Big Six teams this season, with a home win over second-placed Leicester City for good measure. While nobody associated with United should be happy with a points total less than half of Liverpool’s 43, nobody associated with United should be particularly terrified of going to the Etihad on Saturday.

This is not a criticism of Manchester City but they will absolutely play into United’s hands by dominating possession and pushing high up the pitch, leaving space for Marcus Rashford, Daniel James and presumably Jesse Lingard to potentially do damage. You would certainly back them to score against Manchester City’s ramshackle defence – ten goals in four Premier League games suggests that scoring is not United’s biggest issue – but would you back them to stop City at the other end? Probably not, which leads us to think this could be a five-goal thriller. Which is just about everything we want from a tea-time game that requires one of us (Steady, it’s always Steady) to work until 10pm on Saturday night.

Looking at this fixture from 13 months ago (3-1 win to City) illustrates the difference a season and a change of manager can make, with United fielding a three-man central midfield that day of Marouane Fellaini, Ander Herrera and Nemanja Matic. The Spaniard in that particular triptych was described as ‘utterly dreadful’ in our 16 Conclusions from that game. Bizarrely, we find ourselves thinking that Scott McTominay will fare better, especially as City’s midfield is now shorn of Fernandinho.

No sane person expects Liverpool to drop points against a stuttering Bournemouth on Saturday afternoon, which means City absolutely need to beat United on Saturday evening. They will be worried – not because this is a derby and we are duty-bound to talk in cliches about form books and windows, but because this is a United side set up to play against – and thrive against – exactly this City side.

Manager to watch – Jose Mourinho
Talking of the man of many/no digs, Mourinho is back at home with a Spurs side that has conceded two goals in each of their last four games, a feat not ‘achieved’ since 2007 when Ricardo Rocha was a thing. Saturday brings the visit of Burnley and this game really does need to be different. Against opposition that managed to score just twice in five games against Mourinho’s flawed Manchester United, Tottenham really need to show some signs of invulnerability.

As always, way too much was made of Spurs making heavy weather of winning three games they should always have won. And we have to be careful of making too much of a slip at United too. Now the pantomime of that visit to Old Trafford is over, it’s time for Mourinho do some serious coaching of the essentials – of set-piece defending, of shape, of discipline and of patterns of play rather than chaos.

The revitalisation of Dele Alli (it started under Mauricio Pochettino, but let’s not spoil the narrative) has been the easiest of easy wins for Mourinho, but the real work is to be done in the centre of midfield, where he has tried every combination in an attempt to uncover something non-porous. Well, every combination but Harry Winks and Tanguy Ndombele, which might just work against a Burnley side that largely bypasses the midfield anyway. Over to you, Jose. Are we going to see an actual Mourinho performance at the fifth attempt?

Player to watch – Jamie Vardy
In November 2015, Vardy broke Ruud van Nistelrooy’s Premier League record by scoring in 11 consecutive matches. His current streak is seven, meaning that Vardy could equal his own record against Liverpool live on TV on Boxing Day evening. Brendan Rodgers says his striker is not concerned with all that business. We say ‘bollocks, this is the man who screamed ‘all mine, all f***ing mine’ when he broke the record. He will absolutely want to extend it and his own legacy, and only a fool would back against him scoring against Villa on Sunday.

Leicester and Brendan Rodgers have done an astonishing job of elongating the career of Vardy, with the four players behind him on Wednesday night aged between 21 and 26. Vardy does not have to chase into channels – though he still does – and can largely operate within the width of the penalty area. Waiting on the last man for a through ball is basically where he now lives.

On Wednesday against Watford, Leicester had 63% possession but Vardy touched the ball just 24 times – significantly less than Troy Deeney on the losing side. Expect more of the same at Villa on Sunday. And expect a goal. Always expect a goal.

Team to watch – Chelsea
Chelsea are not the best Premier League team away from home – that honour is Liverpool’s of course – but they are the best away team relative to home form. Which basically means they are picking up an average of almost half a point more away from Stamford Bridge, which is why they are absolutely worth watching at Everton on Saturday lunchtime. In five games against non-Big Six opposition this season, they have scored 18 goals. They have also conceded eight (they absolutely cannot defend) but that only makes these games more compelling.

Frank Lampard is far, far away from building a complete team, but he has managed to build an entertaining team, with schoolboy defending allied with schoolboy enthusiasm for attack. In any other season, that might not be enough to keep Chelsea in the Champions League. In this season, with Manchester United, Tottenham and Arsenal in varying states of disarray, it just might be. And in the meantime, they are fun to watch – especially against an Everton defence barely worthy of the billing.

Football League game to watch – Huddersfield Town v Leeds United
The biggest game of the weekend bar none. Nothing else needs to be said. Except UTT.