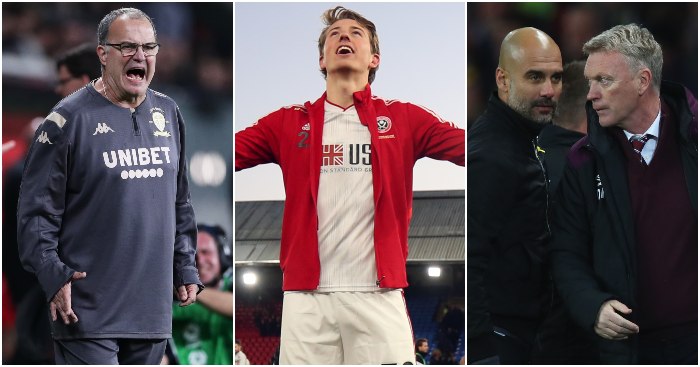 Game to watch – Manchester City v West Ham
The Premier League’s winter break compromise makes for a less-than-thrilling weekend, with the consolation being that all four games are televised over Saturday and Sunday. The half-programme concludes with West Ham’s visit to the Etihad on Sunday afternoon.

City have been hit and miss of late, scoring only three in as many games in the Premier League, with a win, draw and defeat following the thrashing of Aston Villa almost a month ago. But here they have an opportunity to close the gap on Liverpool to just…

More relevant is the chance to put some breathing space between themselves and Leicester behind them. Brendan Rodgers’ side have won only one of their last four in the Premier League but still City have been unable to shake the Foxes from their tail.

Luckily for Pep Guardiola, here comes the hot mess that is West Ham. No club is in quite as much disarray as the Hammers at the moment. The fans – who can’t seem to organise themselves – want the owners out and they don’t trust the manager to get a tune out an expensively-assembled rabble of flops. The David Moyes bounce lasted for one game against a similarly flailing Bournemouth side. Since then, West Ham haven’t won in six games, conceded nine in their last three Premier League matches, lost at home to weakened Championship opposition in the FA Cup and failed to strengthen adequately in January. But they did succeed in getting an apology from Sunday Supplement, so there is that.

“Recently published accounts show West Ham have invested heavily in the squad since their move to the new stadium with a net spend of £214million in the last four years including club record signing Sebastien Haller,” admitted Geoff Shreeves with his hand pinned up his back by Sky Sports’ lawyers. “They have spent over £1.5million on scouts in the past year.”

Yet here they are, a shambling mess in the relegation zone. And there seems to be little respite on the horizon. Five of the big six feature among their next seven opponents, with Wolves in the mix, too. If Sebastien Haller was hoping for more support in the coming weeks, he’d be well advised to think again and prepare to start running the channels in the hopeless pursuit of desperate hoiks intended to give the Hammers’ ropey rearguard a rest.

Even though more than half the Premier League is on the beach, there is a very real possibility of West Ham falling to second from bottom having played a game more than their fellow drop-zone dwellers. Especially if City rediscover their shooting boots.

Team to watch – Everton
Carlo Ancelotti’s side could finish Saturday level on points with sixth-placed Sheffield United and just four off the top four. Which is testament to both the job that Ancelotti has done and the general wretchedness of the Premier League below the top three.

The Champions League may be a stretch for the Toffees but Ancelotti has made no bones about his desire to get into the Europa League at the end of the season. Indeed, for Everton’s financial status as well as their recruitment prospects in the summer, it is ‘very important’.

So Ancelotti would welcome some stability from his side. Everton have recovered from their embarrassing FA Cup defeat to Liverpool reserves by going four without a loss in the Premier League. Had they not capitulated in added time against Newcastle, they might be looking at being even closer to Chelsea. That said, they were perhaps fortunate that Watford folded in front of them last weekend after a worrying first-half display.

The sight of Palace is usually a reassuring one for the Toffees; the state of them certainly should be. They haven’t lost to the Eagles since 2014 but their two recent clashes have both been goalless, which hints at the biggest problem Ancelotti has to solve: Everton’s lack of creativity.

Miserable luck with central-midfield injuries has certainly hampered Ancelotti but the new-ish boss has to find a way of scoring beyond set-pieces and counter-attacks. Especially against a Palace side which will come to Goodison Park to defend and play for another point.

Manager to watch – Nigel Pearson
After five games unbeaten during the early days of Pearson’s reign, Watford are now four without a win. Even more worrying is the reappearance of the naivety that Pearson seemed to have banished within a short time of becoming the Hornets’ third manager of the season.

“Naivety? In what sense?” asked Pearson last week after watching his side lose from 2-0 up, concede two first-half injury-time goals from set-pieces, then let slip a late winner on the the counter-attack to a team playing a man light.

There’s prickly, then there’s that.

Seb Stafford-Bloor was at Vicarage Road last week to watch the whole sorry scene play out while also being witness to Pearson’s post-match agitation. ‘A disaster. This will be the kind of loss which leaves a mark,’ he wrote, and the first chance to see how deep comes when the Hornets head to the AmEx on Saturday evening.

Danny Welbeck spoke about how down the squad was after capitulating against Everton. Craig Cathcart blamed individual errors, while Gerard Deulofeu bemoaned Watford’s game management. Which is a technical term for saying they f*cked it. We have to presume Pearson has been in their ear all week and similar errors won’t be forthcoming this weekend. But with this Watford squad, there are simply no guarantees.

Brighton have already left their impression on Watford after thrashing Javi Gracia’s men on the opening day of the season in Graham Potter’s first game in charge. And they were rather more resolute than Pearson’s men last week when they came from 3-1 down to earn a draw at West Ham.

We can expect Pearson to have had quite enough of five and six-goal thrillers. The Watford boss will want to see a clean sheet first and foremost, especially with Liverpool, Leicester and Manchester United among their next four opponents.

Player to watch – It’s Saaaander Berge
After introducing himself to Sheffield United fans at Crystal Palace last week, the Blades’ record signing gets to do the same to the home support when Bournemouth go to Bramall Lane on Sunday afternoon.

The £22million midfielder completed only a single training session with his team-mates last week before playing three-quarters of the win at Selhurst Park. Chris Wilder laid on additional sessions with academy players to help Berge acquaint himself to the Blades’ interpretation of 3-5-2 and they seemed to do the trick, with the Norway international winning 100 per cent of his five tackles against the Eagles.

Having had a full week to familiarise himself further with his surroundings, Berge goes into battle with a Bournemouth side that has arrested its descent towards the bottom with a pair of wins in their last two games. The Cherries can put themselves five points clear of the bottom three with another.

United, though, can move within a couple of the Champions League places – and we shouldn’t become complacent as to how remarkable that is. That Berge is a Blade is also something in itself. The 21-year-old was linked with established Champions League sides like Manchester United, Liverpool, Tottenham and Napoli. Let’s see how close the former Genk star can get to a return to that between now and the end of the season.

Leeds remain in the automatic promotion spots despite having won only two of their last nine games. And those two wins were both ridiculous. It’s seen optimism give way to that familiar Leeds pessimism, which Bielsa has been quick to acknowledge: “The supporters are not believing any more in our team… We believe more than ever in ourselves.”

In contrast, Forest were unbeaten in seven before losing to Birmingham last week. Returning to winning ways against Leeds would see Sabri Lamouchi’s side move to within a point of the twitchy-arsed Whites, who could have Fulham up alongside them by the time they kick-off by the Trent.

European game to watch – Bayern Munich v RB Leipzig
It might not be a Bundesliga decider but Leipzig’s trip to Bavaria on Sunday night seems certain to have a major influence on the destination of the title.

Bayern top the table with Leipzig only a point behind, though by the time Julian Nagelsmann’s men go into battle with Hansi Flick’s, Borussia Dortmund may have positioned themselves between the top two if they beat fifth-placed Bayer Leverkusen on Saturday.

Both Bayern and Leipzig have been on fire in front of goal this season – the former have matched the all-time best haul by this point of any Bundesliga season – so it promises to be a thriller. Between them, the top two have scored 111 goals this campaign, with Robert Lewandowski and Timo Werner going at each other in the race for the Golden Boot. The Bayern veteran is on 22 goals after 20 games; Werner trails two behind.