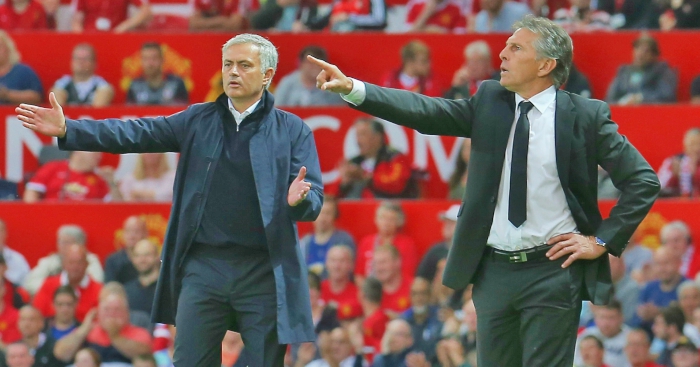 Game to watch – Manchester United v Southampton
It is an unnecessary inconvenience, unless of course you are the ones eventually lifting the trophy at Wembley. For all the recent talk of the FA Cup losing its magic in recent years, at least it once had a reputation, an allure, a charm. The ugly stepchild, the League Cup, has never been so lucky.

Jose Mourinho of all people knows how potentially important it can be. It was his maiden trophy win in England, the first taste of silverware his Chelsea side had sampled in both of his managerial spells. The club’s 2005 and 2015 triumphs were both followed by Premier League titles that same season.

The immediate consequence will not be the same for Manchester United if they beat Southampton on Sunday, but it could provide the platform for a period of success. The club and the manager have been praised almost constantly for the last few months, yet they remain in sixth place in the Premier League. This is the first chance for tangible success to be delivered outside the echo chamber of fawning pundits and ex-players.

Every revolution has to start somewhere, and there is no better place than the first trophy of the season. The Community Shield is nice and all, but even the League Cup is pointing and laughing behind its back.

But it cannot be denied that the League Cup has always been Mourinho and United’s fourth priority. The same cannot be said for Southampton and Claude Puel. Those who insist that England’s tertiary competition does not matter ought to revisit the celebrations instigated by Shane Long’s winner against Liverpool in the semi-final second leg. For Saints, this is huge.

It would represent progress for Southampton, a club who have become synonymous with the word. They have secured a higher league placing than the previous campaign in seven successive seasons, but improving on last year’s sixth-place finish is surely impossible. A Wembley victory, a first major trophy in 41 years, only a second major trophy in their history – combine that with a mid-table finish, and that is progress once more.

The Southampton manager will be keen to deliver the trophy for the club, the fans and the city, but there must also be an individual aspect to his desires. As Martin Samuel of the Daily Mail wrote in the summer: ‘How can Claude Puel be a better bet for Southampton than Michael O’Neill after failing to win Ligue 1 with Lyon?’ Revenge is a dish best served cold, and eight months after the chef was admonished for not being British.

On Sunday, two teams, two managers and two sets of players with wholly opposing aspirations will contend for the first trophy of the season. United and Mourinho constantly have the Champions League on their minds, while Southampton and Puel simply wish to continue proving people wrong with consistent progress in the face of adversity. For both, the League Cup is another rung on that ladder.

“The turnaround hasn’t been as quick as I would have liked. People will look at my track record and say, ‘Sam will do it’ but I can’t do it on my own, the players have got to do it for me.”

Sam Allardyce’s message earlier this week was clear, albeit inherently flawed. For a manager who was appointed in December to redirect pointed fingers from himself to his players two months, one transfer window, one Premier League win and six defeats after his appointment was disingenuous. Some might even go so far as to describe it as insulting, considering the club were outside the relegation zone when he replaced Alan Pardew in December. The only club keeping them off the bottom now are Sunderland.

Allardyce has become a regular fixture in this weekly preview, such is the general surprise at his inability to turn things around. But there was at least a semblance of truth to his comments midweek: This is a mid-table squad mired in a relegation battle. The manager deserves censure, but so do the players.

None more so than Christian Benteke, the £27million summer signing. The Belgian has scored nine goals in his first season – a fair return for a club second from bottom – but his form under Allardyce has been underwhelming to say the least. In his last ten Premier League games, the striker has scored one goal and assisted none.

Against Middlesbrough, the 26-year-old must start to prove his worth once more. He inspired Aston Villa to safety just two seasons ago; he must repeat the feat.

Team to watch – Liverpool
Over the course of 47 days from December 27 to February 11, Liverpool played 13 games. They slipped from second to fifth in the Premier League table, were knocked out of the EFL Cup at the semi-final stage, and suffered an embarrassing exit to lower-league opposition in the FA Cup. A season that promised so much looked as though it might deliver little more than crushing disappointment.

Over the course of 99 days from February 12 to May 21, Liverpool will play their final 13 games. After playing ten matches in January, they will play just three in the whole of February. It is two weeks and two days since their last fixture, with the 2-0 victory over Tottenham now a distant memory. It felt like a corner turned at the time, but a red light prevented them from building momentum. They spent the first weeks of 2017 praying for a break, but it was the last thing they would have wanted after overcoming yet another top-four rival.

“We have to use this,” said Jurgen Klopp, discussing what he described as a “second pre-season”. The German would add that his players “will go again and again and again” upon their return from an extended break. After a week spent in La Manga, there are no excuses against a managerless Leicester side who have lost their last three games, and have not scored a Premier League goal since the turn of the year.

From now until May, Liverpool have just one midweek game. They have a break of at least five days in between every other fixture to rest, to train, to prepare. With their league defeats this season coming to Burnley (12th), Bournemouth (14th), Swansea (15th) and Hull (18th), a meeting with 17th-placed Leicester provides the perfect opportunity to prove that they can scrap with the lightweights just as well as they can handle the heavyweights.

Manager to watch – David Moyes
David Moyes will not remember his last visit to his old home so fondly. It was April 20, 2014, and Everton beat Manchester United 2-0 at Goodison Park through a Leighton Baines penalty and a Kevin Mirallas goal. It was a comfortable Sunday afternoon stroll for the Toffees, his former side.

Two days later, Moyes was sacked as United manager. On Friday he will prepare his finest suit, tuck Leon and Tony into bed and practice his best grin and wave combination, for he returns to Goodison again on Saturday. Some things never change, of course; he might be manager of Sunderland now, but the pressure he faces is just as great as it was in April 2014.

An away fixture with Everton would not have been earmarked by the Scot as a place to pick up potential points, but needs must. Sunderland are bottom, and although they are by no means doomed, the manager must start instilling consistency over complacency. Few other sides and few other managers could follow a 4-0 away victory one week with a 4-0 home defeat the next. But that is David Moyes for you, a man with a storied history at Goodison Park. He will hope this next chapter is rather happier than the last one.

One-on-one battle to watch – Harry Kane v Ryan Shawcross
Those with different tastes will keep an eye on the battle between Dele Alli’s studs and every Stoke players’ shins on Sunday, but the few hoping to be entertained via more traditional means – goals, good football, all that boring stuff – have history on their side at White Hart Lane. Tottenham have won their last two games against Stoke, both by a 4-0 scoreline. Kane has scored three of those eight goals, with Ryan Shawcross the only member of the Potters’ defence to have featured on both occasions. With Tottenham still chasing Champions League qualification, the stakes are higher than ever. And that is without mentioning the fact that Stoke will want to strengthen their grip on ninth place.

Football League game to watch – Leeds v Sheffield Wednesday
Both are vying for Championship promotion, both are in the play-offs, both are on 58 points, and both hail from a magical, mythical place called Yorkshire. Lock up your sons, lock up your daughters, and lock up the numerous fans who will get a little too rowdy because they’ve had a few too many at the Wetherspoon’s in the train station. This is the big one. Garry Monk and Carlos Carvalhal will both be more than happy to assist the form book on its journey out of the window; Leeds have won one of their last four, and Wednesday were beaten at home by Brentford in midweek.

European game to watch – Atletico Madrid v Barcelona
It took a penalty from Lionel Messi in the closing stages for Barcelona to avoid a second embarrassment within the space of a week. The after-effects of the 4-0 defeat to Paris Saint-Germain were still being felt when lowly Leganes were welcomed to the Nou Camp the following Sunday. The relegation-battlers almost left with a well-deserved point.

The home crowd whistled as Leganes had 11 shots to Barcelona’s 13. Messi did not celebrate his match-winning penalty, goalkeeper Marc-André ter Stegen was named man of the match, and all post-match discussion centred on the future of manager Luis Enrique.

A meeting with old foes Atletico Madrid would be low on the under-fire Spaniard’s list of preferences. Barca edged past them in the Copa del Rey, but Diego Simeone’s side knocked them out at the quarter-final stage in the Champions League last season. Atletico, beaten just once at home in La Liga this season, can close to within three points of Barca with a win. Enrique’s side, even amidst the criticism, would go top with a draw, even if only for a few hours. Real Madrid, who lost 2-1 to Valencia in midweek, face sixth-placed Villarreal in the evening.

Where is Mike Dean this week?
It came as a surprise to many, but Mike Dean took a backseat last week. He was not appointed for any FA Cup game, and even played second fiddle to Mark Clattenburg as he engineered a move to Saudi Arabia. Mind you, the Wirral-born wonder did feature rather heavily in our look at refereeing oddities; you can’t keep the great man down. But you can send him to officiate Sheffield United’s home game with Bolton in League One on Saturday at 3pm, which is a bit weird.