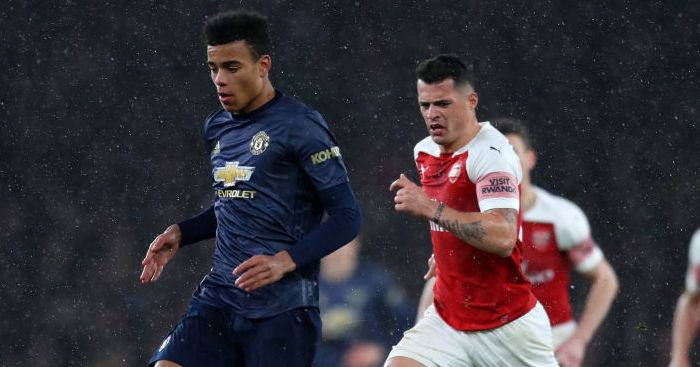 Game to watch – Manchester United v Arsenal
Ole Gunnar Solskjaer’s managerial Manchester United reign can be rather neatly separated into two eras. There was the prosperous BA (Before Arsenal), followed immediately by the current plight of AA (After Arsenal). Their visit to the Emirates Stadium in March not only prompted a first Premier League defeat but, as the 18th game of 37 so far, it is an almost exact halfway point and the game which seemed to trigger a downward spiral.

Some sort of drop-off was always inevitable. United had maintained such an incredible pace for three months from December that they were bound to suffer stitch at some point. Gary Neville even dismissed the defeat at the time as a form of hangover from their sensational Champions League exploits in Paris four days prior. And while their problems are certainly self-inflicted, they are considerably more worrying.

Those goals from Granit Xhaka and Pierre-Emerick Aubameyang did more than pierce United’s air of invincibility. It brought them crashing back down to Earth and they are still suffering the after-effects. The limp West Ham defeat felt like some sort of nadir, only to be followed by an inability to beat League One side Rochdale at home in 90 minutes.

Arsenal have at least offered a response to their recent struggles, and it certainly doesn’t feel like they are unbeaten in five games since that defeat to Liverpool. They are two points behind Manchester City, started their Europa League campaign with a 3-0 win, crushed Nottingham Forest by five goals on Tuesday, have a raft of players returning from injury at the right time, and are exciting again.

Yet this is still quite the test. Arsenal have not won at Old Trafford in the Premier League since 2006. They have drawn eight games and lost 15 away at Chelsea, Liverpool, Manchester City, United and Tottenham since their last win at one of those sides in January 2015. They might not have a better chance to end that record.

For United, a defeat to Arsenal triggered their current slump. Might a positive result against the same side revert their fortunes once more?

Player to watch – Miguel Almiron
How quickly the tide has turned. The revelation that Miguel Almiron was en-route to Tyneside for a medical ahead of his club-record move on January 29 seemed to ignite something from within Newcastle, lighting a spark that had been allowed to fizzle out for far too long. Later that same day, the Magpies stunned Manchester City to win 2-1 at St James’ Park. By the time he made his debut in an exciting substitute cameo the next month, a fruitful relationship had already started to blossom.

Then came the hamstring injury that ruled him out for the rest of the season in April, the departure of Rafael Benitez in June, the appointment of his replacement in July and the confused and confusing tactics that have carried his wait for a first Premier League goal or assist all the way past August and through to September.

If the story of a wide-eyed South American leaving the United States to make it big at Newcastle has been told before, this was never a part of the script. Santiago Munez dealt with the trials and tribulations of poverty, a sensible father, asthma, jealous teammates and The Sun, but even he could not overcome an obstacle the size of Steve Bruce.

This is not all on the manager. Almiron’s positive performances never translated into goals under Benitez, and he has created as many chances this season in 500 minutes as Ki Sung-yueng in 91 (2). The Paraguayan himself would concede that, while his work-rate and energy is undoubted, his quality and output has been nowhere near the required standard.

But he is being played out of position, asked to make meals out of whatever scraps are left by Joelinton when Newcastle’s only tactic of feeding the centre-forward actually works. After impressing on the left-hand side of a front three with Ayoze Perez and Salomon Rondon last season, Almiron is toiling on the right of an unambitious, uninspiring and unimaginative attack. No Newcastle player looks particularly comfortable in this system, not least those allowed to venture beyond the halfway line on occasion, but he is suffering more than most.

Almiron has been made the scapegoat by some for the club’s current plight, culminating in suggestions he could be dropped for Allan Saint-Maximin against Leicester on Sunday. It would seem harsh to misuse then discard such a talented player, but the Paraguayan must start either taking or making his chances.

Manager to watch – Mauricio Pochettino
Not since he was a fresh-faced 40-year-old coming over here, taking Nigel Adkins’ job, refusing to (publicly) speak the language, has Mauricio Pochettino been subject to such widespread scrutiny and condemnation. He managed to confound the critics at Southampton, but his former employers will have no issue with sticking the knife in further on Saturday.

A single point separates them from Tottenham in the Premier League table, but momentum cannot be ignored. Saints are turning their slow march into a sprint; Spurs have tripped over their shoelace while simultaneously suffering stitch, spraining their ankle and crossing the road into oncoming traffic without looking both ways. One club is looking up while the other is fearing how much further they could fall.

Is this Tottenham at their lowest ebb under Pochettino? Four wins from 17 games is as unforgivable as the nine defeats accompanying them, with the three clean sheets recorded in that time almost unfathomably poor. But the three consecutive defeats to Watford, Liverpool and Inter Milan in September 2018 felt cataclysmic and they rescued themselves from that situation to reach a Champions League final and finish fourth in the Premier League.

Even in October and November 2016, when they went seven consecutive games without a win, they lost only twice and stayed defensively resolute throughout. This time, Tottenham feel about as feeble at the back as they do up front.

A confident team would not start three central midfielders against a middling League Two side. A unified team would not spurn a pair of two-goal leads in separate matches to draw both times this month alone. An evolving team would not be so characterised by infighting, marred by constant speculation or undermined by “different agendas”.

And a focused, sanguine, determined manager would not allow it all to faze him. Hosting a familiar face offers a chance to set a season back on track. With Bayern Munich lying in wait three days later, it could equally derail it further.

Team to watch – Liverpool
Ipswich halted Manchester United at 12 in August 2000. West Ham bowled Arsenal out on 14 two years later. Tottenham stopped both Chelsea at 13 in December 2016 and Manchester City at 15 in August 2019, with City’s record-breaking streak of 18 snapped by Crystal Palace in January 2018. So Liverpool will know that Sheffield United will pose as much a threat as anyone to their current Premier League run.

“15 wins is exceptional, but what can I say?” was Jurgen Klopp’s reaction to the latest victory at the weekend. “We try not to think about it, we just do what we have to do in the next game and fight for each ball and it is always really hard work.”

To come through their visit to Stamford Bridge unscathed spoke more of their mentality than any overwhelming quality. Liverpool were far from their best against Chelsea but maximised their threat in certain situations – at set-pieces – and defended resolutely enough to maintain that lead. Whether the three points were ‘deserved’ matters not.

At this stage of the run, when results start to take clear precedence over performances, it becomes all-consuming. Everything is about whether Liverpool can win; everything is about keeping that gap to Manchester City at least as big as it is now for as long as humanly possible. It is a season within a season, and the inevitable nervous energy must be channeled into something positive.

Klopp is the perfect manager for that role, one able to sharpen the mind and emphasise the importance of the task at hand. Complacency cannot creep in, and considering Liverpool have dropped just six points in 33 games to teams outside the traditional Big Six since May 2018, it surely will not.

Chris Wilder joked in midweek that the Blades “might turn into a back 10 or 11” to counter such a considerable threat, but they will play their own game, pose their own problems and ask their own questions. He is right to point out that there is a “level-playing field” at kick-off; it is Liverpool’s job to unbalance it in their favour.

Football League game to watch – QPR v West Brom
In pure entertainment terms, few games titillate and stimulate more than fourth against fifth, and the division’s two highest scorers meeting on a brisk early Saturday afternoon. There have been 26 goals in QPR’s eight games so far this season, and 25 in West Brom’s. Only Luton (28) can boast more action.

The visitors were expected to scale such lofty heights. Adding Slaven Bilic to an equation that lost Dwight Gayle and Jay Rodriguez but gained Grady Diangana, Semi Ajayi and Kenneth Zohore guaranteed some excitement. Their last clean sheet in all competitions coming in the second leg of their Championship play-off semi-final penalty shootout defeat to Aston Villa does somehow seem apt.

But QPR were never supposed to keep such company. Mark Warburton is no stranger to crashing parties at this level, nor are Nahki Wells and Jordan Hugill. Even so, they are making this look easy. It took them until October 20 to record their fifth Championship win in 2018/19; they reached that mark by September 21 this season.

Even without all that, their last four meetings have brought scorelines of 2-3, 7-1, 1-4 and 3-2, with both sides winning two games each. Goalless draw it is.

European game to watch – Atletico Madrid v Real Madrid
It remains to be seen whether Real Madrid hop onto the impending managerial merry-go-round, but it does bear stating that this is not yet a crisis, even in the hyper-sensitive world of Los Blancos. They are top of and unbeaten in La Liga after six games, four points above Barcelona and settling more by the week. It’s enough to make you wonder what the fuss is all about.

The forward steps are still tentative, particularly considering the collapse that came against Paris Saint-Germain in the Champions League. And a derby defeat to Diego Simeone’s Atletico could be similarly disastrous. If these are cracks that Zinedine Zidane has simply papered over for the time being, they will be ruthlessly exposed on Saturday.

Atletico proved just how difficult they are to beat at the Wanda Metropolitano when they came from 2-0 down after 69 (nice) minutes to draw against Juventus last week. That they have been beaten just once in their last 29 home games ought to panic Real just a little; that Real inflicted that solitary defeat in February should shift the pressure back over to their bitter rivals. And Sergio Ramos’s 28th-minute red card after opening the scoring will even the odds.