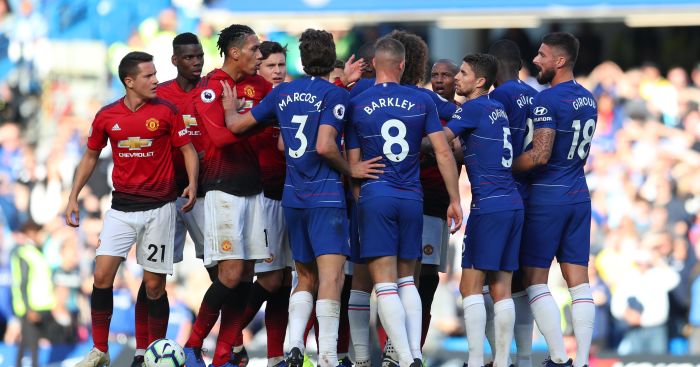 Game to watch – Manchester United v Chelsea
Not the title decider it might have been in still relatively recent history, but a biggun nonetheless. With wheels coming off in every direction in the ‘race’ for a top-four finish, this final direct clash between two of the four combatants has taken on huge significance.

If this were a sane world, United’s back-to-back defeats to Everton and City and Chelsea’s limp home draw with Burnley would have left hopes hanging by a thread.

But with Arsenal contriving to take zero points at this crucial stage from games against Palace and Wolves, the race is still very much on. In a great plot twist, Spurs – with a whopping 10 points from their last nine games (admittedly nine of them from the last four) – appear to be the least Spursy of the quartet.

If United do get the better of Chelsea they’ll be looking good for a final total of 73 points. Defeat here would leave Chelsea looking at a maximum total of 73 with ticklish games against Watford and Leicester to come. All to play for, then, and by the time these two meet on Sunday afternoon they’ll also know precisely what kind of inevitable ghastly mess of things Arsenal have made at Leicester earlier in the day.

Player to watch – Jamie Vardy
Seven goals in seven games under Brendan Rodgers for a striker with a long and proud history of sticking it to the Premier League’s big boys. And on Sunday he gets to go up against an Arsenal team that has shipped six goals in two games and will doubtless have one eye on the first leg of their Europa League semi-final against Valencia.

He’s scored six Premier League goals in seven starts against the Gunners and under the present conditions it would rank as a major surprise if he didn’t add to that tally at the King Power.

Team to watch – Tottenham
On Tuesday night, Tottenham consolidated third place in the Premier League table despite being without their first-choice central midfield of Harry Winks and Moussa Sissoko and with Vincent Janssen and Fernando Llorente in tandem up front.

If Spurs maintain their flawless record at the Tottenham Hotspur Stadium – where they have won every game they’ve played without conceding a single goal – on Saturday lunchtime against West Ham they will be almost certain of a place in next season’s Champions League ahead of this year’s semi-final clash with Ajax.

Now imagine going back to the start of the season and trying to explain those two sentences to someone.

Manager to watch – Chris Hughton
After five straight defeats with zero goals scored and with daunting away games against Wolves and Spurs in prospect for a Brighton team suddenly in deep dung, Hughton unapologetically and pragmatically went ultra-defensive.

It secured a goalless draw at Wolves – who would put three past Arsenal before half-time four days later – and oh so nearly worked again at Spurs before Christian Eriksen’s late heartbreaker.

Now, though, a decision must be made. Does Hughton stick with the new plan that turned a soft touch into something at least tough to beat for what is their last realistic shot at three priceless points? It’s one that may not even be made until the very last moment based on how Cardiff have got on at Fulham.

But Brighton must surely change tack for a home game against Newcastle. With the ultra-defensive approach sure to return for the last two fixtures against Arsenal and Manchester City, the Seagulls must have a bit of a swing in this one.

Football League game to watch – Sheffield United v Ipswich
Norwich are all but promoted despite their controversial plan to get there in single-point installments, and now Sheffield United need only beat the Championship’s bottom club to complete their own return to the Premier League after Leeds’ disastrous Easter weekend.

The Blades now have a three-point and 11-goal cushion over third-placed Leeds, meaning any victory over Ipswich in their penultimate game of the season should be enough.

It’s been a remarkable effort for a team not seen in the top flight since 2007 and which only ended a six-year sojourn in League One two years ago and have emerged as the Championship’s most resilient outfit in the three-way scrap for automatic promotion. Just don’t f*** it up now.

European game to watch – Barcelona v Levante
Not a vintage crop of games on the continent. The Eredivisie title race is put on hold to help Ajax’s Champions League quest, while Dortmund and Bayern should collect another three points each in Germany.

Juventus have already wrapped up Serie A ahead of a trip to Inter, who will hope to cash in on any title hangover from The Old Lady to consolidate their own Champions League spot.

Barcelona could and should join Juventus, though, in confirming their own title with a bit to spare on Saturday, needing only to match Atletico Madrid’s result against Real Valladolid when they host Levante later in the day.

With Levante languishing in 14th and the reverse fixture ending in a 5-0 Barca win, it seems almost certain that whatever Atletico do there will be a title party at the Nou Camp as Barcelona celebrate their 26th Spanish crown. It won’t be enough to appease some, mind.