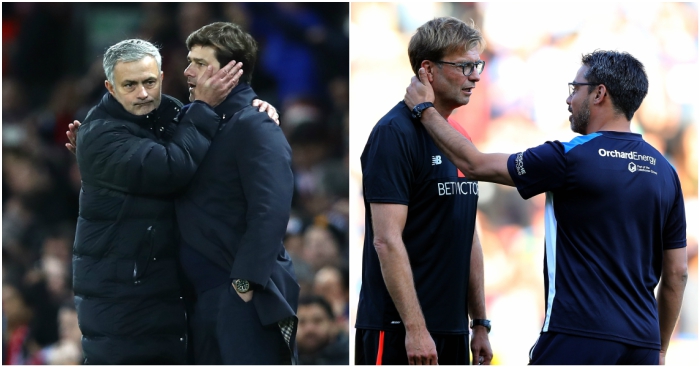 Game to watch – Manchester United v Tottenham
Jose Mourinho had just watched his Manchester United side emerge victorious despite claiming just two-fifths of the possession against Tottenham at Old Trafford last December. “After so many matches playing well but not winning, we needed more the points than the performance,” said the Portuguese.

Style will never take precedence over substance – points are always preferential to a performance – but Mourinho really could do with combining both on Saturday. Or he could at least display a willingness to try. What is an acceptable but disappointing defensive tactic at Anfield is more difficult to justify on home soil.

To suggest that Mourinho’s approach for games against a similar level of opponent has always been a problem would be inaccurate. In his first season at Chelsea he built a Premier League title win on 1-0 victories over Manchester United, Liverpool (twice) and Everton, and drew both games with Arsenal. A safety-first attitude in games against his nearest rivals was common sense.

But when that mini-league of four or five strong teams is expanded to six potentially excellent ones, it becomes a more questionable tactic. If ten games against direct rivals represents ten games in which Mourinho is actively looking to not lose instead of winning, it leaves no room for error against anyone else. Like Stoke City and Huddersfield Town.

His recent record suggests that outlook is failing. Mourinho has won just four of his last 20 Premier League games against Arsenal, Chelsea, Liverpool, Manchester City, United or Tottenham. His teams have lost seven of those games, drawn nine, scored 16 goals and conceded 25.

Yet history remains on his side. Mauricio Pochettino has never beaten Mourinho in an away game, and only one of these two sides collapsed in Carabao Cup action in midweek. The onus will be on Tottenham to press forward in their customary manner.

As for United, Mourinho will not change his course of action now. The hosts will sit men behind the ball and wait for any potential mistake before pouncing. The question is whether Tottenham are good enough to negate any tactic Mourinho employs. Pochettino has one more hurdle to overcome.

Player to watch – Cesc Fabregas
No Chelsea player has revelled in the absence of N’Golo Kante. The Blues conceded seven goals in the nine games the Frenchman started before his untimely injury, and eight in four fixtures since he was sidelined. Their last Premier League victory over Watford was achieved in spite of their central midfield, not because of it.

Kante is one of five midfield options at Stamford Bridge, all of whom cost at least £30million. But Tiemoue Bakayoko and David Luiz have struggled to cope with the immense defensive workload that Kante shoulders in each game, while Danny Drinkwater is lacking match fitness as only a player with one start since early May will.

Then there is Cesc Fabregas. The longest-serving member of the quintet is the most under pressure to perform. Only three outfielders have started each of Chelsea’s three Premier League defeats this season, and while there are no direct replacements in this supposedly threadbare squad for Cesar Azpilicueta or Marcos Alonso, the midfield options are increasing.

Fabregas has never been a defensive midfielder, but there is little room in Antonio Conte’s system for a free spirit. “Maybe I’m a bit more the playmaker, creative going forward,” said the Spaniard last September. “He wants me to be a little bit more stable and compact in defence.”

With Kante and Drinkwater nearing full fitness, Conte will finally have an alternative to Fabregas should he intend to use it. The Spaniard has a matter of games to persuade him not to, starting with Bournemouth.

Team to watch – Leicester City
For a man missing one crucial ‘w’ from his Twitter bio of ‘Senior Football Anchor’, Richard Keys is an inexplicably influential voice in the sport. So when he greeted the appointment of Claude Puel as Leicester manager with a simple ‘RIP British coaching’, it was impossible to ignore.

While Keys and those of his ilk were ready to welcome Sean Dyche or another Brit by draping them in a Union Jack and shoving a bulldog into their arms, Leicester ignored nationality and instead concentrated on suitability and availability. There is no guarantee that Dyche would have relished the opportunity to jump from a ship in eighth to one in 14th. Few realistic candidates to replace Craig Shakespeare truly inspired the Leicester faithful, and so the out-of-work Puel was the next best option: a steady, cheap, reliable hand.

The Frenchman will not have the luxury of an extended spell with his new players ahead of his first game, but there has to be an upturn in performance against Everton on Sunday. The Foxes played without a clear identity under Shakespeare, and while Puel has his critics, he is a title-winning Champions League semi-finalist.

Leicester have acted quickly in replacing their sacked manager, while it seems that Everton will bide their time in the same scenario. Both sides have struggled with comparatively difficult fixture lists early in the season, but there can be no such excuses in this game.

Managers to watch – Jurgen Klopp and David Wagner
In the space of 28 days in late 2015, two men who describe one another more as family than friends were appointed in their most recent jobs.

Jurgen Klopp and David Wagner have taken drastically different paths to arrive at the same destination. The former was an unspectacular player but celebrated manager, coaching three clubs over the space of 16 years, winning five trophies. The latter was an international and won a UEFA Cup with Schalke before taking his first managerial post with Huddersfield in November 2015.

Almost two years on from his arrival, Wagner has rather unfathomably overseen the Terriers’ transition from lowly Championship club to Premier League upstarts. One point separates them from Liverpool in the current table.

Ordinarily, Wagner would be reluctant to plunge the godfather of one of his children further towards catastrophe. And typically, Klopp would be unwilling to bring his best man crashing back down to earth. But for 90 minutes at Anfield, friends will become enemies. At least after the biggest pre-match hug in the history of mankind.

One-on-one battle to watch – Nemanja Matic v Eric Dier
Almost 12 months since issuing an ominous warning to his midfield rival, it is likely that Eric Dier will face Ander Herrera on Sunday. But with the Spaniard becoming more of a bit-part player at Manchester United, the more intriguing match-up will feature one of his teammates.

“He told me about United’s interest since last summer and I explained the situation to him clearly,” said Mauricio Pochettino earlier this week about Dier. The Tottenham manager would accuse Mourinho of unsettling his player, of planting a seed in his mind before pursuing and sealing a deal for Nemanja Matic instead.

Dier remains some way off his best, failing to recapture the form that made him a £40m Old Trafford target in the summer, but his importance to the Tottenham cause is undoubted. Only two outfielders have played more minutes in all competitions this season.

Staying in north London was the wise career move for Dier, and this is his first opportunity to prove it. There is a sense that neither he nor Matic have proven themselves capable of helping control a big game for their current clubs. Something will have to give when the midfielder Mourinho wanted meets the one he got

“Six years out – and with all the s**t that gets chucked at you – you just have to enjoy everything that this division is about.”

Chris Wilder was likely referring to things other than Leeds – go read about them here – when he was discussing the “s**t” Sheffield United have had to deal with in recent years. The 50-year-old has dragged the Blades up from League One and straight into a battle at the top of the Championship, one their Yorkshire rivals are also firmly entrenched in.

Neither side was widely tipped for promotion in the summer, but both currently reside in the play-offs. Their managers could not be more different: Wilder is the Englishman with 15 years of managerial experience to his name; Thomas Christiansen is in his fourth year as a coach, with Leeds his third club.

It is fourth hosting third, with four points separating the two clubs. It is a first meeting between them since 2011. In Wilder’s words, it “doesn’t come any bigger than this”.

European game to watch – Bayern Munich v RB Leipzig
On a weekend where AC Milan host Juventus, it was always going to take a stellar fixture to overshadow a replay of the 2003 Champions League final. But Milan are eighth in Serie A and Juventus are third; the allure of this game is purely nostalgic.

Germany provide the true attraction. After nine games the Bundesliga table has a rather familiar feel, with Borussia Dortmund, Bayern Munich and RB Leipzig all separated by one point. Second hosts third on Saturday with Bayern and Leipzig vying for supremacy.

The pair met on Wednesday in the DFB-Pokal second round, and Bayern needed a penalty shoot-out to edge through after a 1-1 draw. Both sides fielded strong XIs featuring Mats Hummels, Jerome Boateng, David Alaba, Arturo Vidal, Robert Lewandowski, Emil Forsberg, Kevin Kampl and Naby Keita, because resting players is for nerds and English clubs.

Unfortunately for Leipzig, Keita will take no part in Saturday’s game: his third red card of the season rules him out at the Allianz Arena. But at least they are travelling to Bayern, where Jupp Heynckes has won his last nine home league games at an aggregate score of 37-5. Let’s hope Red Bull really does give you wings. Because Carabao certainly doesn’t.