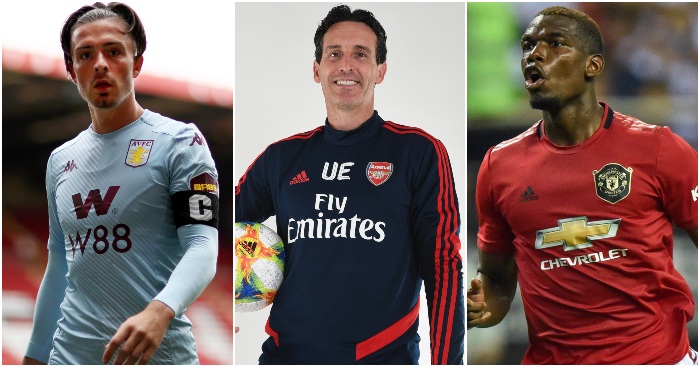 Game to watch – Manchester United v Chelsea
A clash of two Premier League titans would attract all eyes on any given Sunday during the season, but on the opening weekend when so little is known about what to expect from either side, this is a must-watch.

You could make a good case for both Manchester United and Chelsea finishing in the top four just as you could for both bombing come May and this is our first opportunity to get a steer on who will thrive and fail of two of the Premier League’s least experienced bosses. But in this ‘knows the club’ derby, the greenness of the managers hasn’t tempered excitement ahead of a campaign which should usher in huge change for both United and Chelsea, even if neither have made the number of alterations that they might have hoped to.

The greater scrutiny falls upon Ole Gunnar Solskjaer. At the start of what he hopes will be his first full season, United could not have wished for better preparation on the pitch, even if some of their recruitment objectives remain unmet. Six friendlies have reaped as many wins and, more importantly, cultivated some optimism and excitement borne of a mixture of pace, creativity and cohesion in an attack which rarely offered any of those three qualities last season.

Of course, most of the attention will be focused further back upon Harry Maguire. Because of the fee paid for the England centre-back, many are expecting the centre-half to make United impenetrable just by his mere presence. Judgement will be swift – in some quarters it has already been made – and anything less than an exemplary display against a Chelsea attack shorn of its best player will be pounced upon, as it was when Gary Pallister and Jaap Stam were less than perfect immediately after their record moves into the centre of United’s defence.

We know neither manager’s first-choice XI. How can we when they probably don’t? Solskjaer’s selection, though, will offer the deepest insight into his thinking beyond the weekend. Will he make the ruthless changes he promised at the end of last term and place his faith in youth which was repaid in pre-season, or will we get more of the same? Will Paul Pogba see his arse or set about proving wrong the justified criticism flung at him during his last appearance at Old Trafford?

For Frank Lampard, this is rather more of a free hit. Their transfer ban, making Chelsea’s squad weaker than last season, has insulated him from immediate judgement but no Blues manager, no matter how deep-rooted he might be in the history of the club, is immune from scrutiny.

Though his attack is demonstrably weaker, Lampard’s most pressing concern will centre around his defence. Even before David Luiz opted to switch sides, the Blues conceded 11 goals in seven pre-season matches, which is hardly sound preparation for facing a United forward line thirsty for blood. In attack, his options are few and far between with Tammy Abraham set to get the chance to lead the line in a shape which will probably mirror that of the hosts.

Lampard, like Solskjaer, must also perfect a blend of youth and experience. One of the main reasons for optimism around both squads is the young talent each side possesses. How much we see on Sunday will give us a glimpse into how brave either manager is feeling for the season ahead.

Manager to watch – Unai Emery
Arsenal had us all fooled. We all swallowed the line that the Gunners had £40million – £45million at a stretch – to spend this summer, just before they chucked around £140million at filling the cracks in their squad. Just over £60m worth of sales gives a net spend at close to double we were promised, but some creative accounting explains it all.

Now we get to see how Emery shapes his new squad. The Arsenal boss has certainly been brave and though the landscape looks a lot brighter than it did even on Wednesday, the defence remains a worry and the squad still wonderfully imbalanced. Perhaps it is appropriate that Emery will take his thrill-seekers to Newcastle, home of the Premier League’s original entertainers, when for the first time we will see how the Gunners boss plans to ensure that his previously porous defence doesn’t ruin all the good work of an attack which could rival any in the league.

Emery has certainly backed his coaching ability. Of all the components within a team, the defence is one that can most easily be improved by collective organisation. Kieran Tierney’s arrival and Hector Bellerin’s return from injury improves the ingredients but Emery still has to find the right recipe to protect Bernd Leno. David Luiz is a fine player but asking him to bring complete solidity and defensive organisation to a unit where there was previously none is a massive punt.

Maybe Emery also feels he can protect his back four better. Dani Ceballos has arrived on loan from Real Madrid and it will be fascinating to see how the youngster settles should be handed the creative burden, with Lucas Torriera and Granit Xhaka operating more conservatively.

Once the business at the back is concluded, we can all enjoy the party up front, with Nicolas Pepe, Alexandre Lacazette and Pierre-Emerick Aubameyang looking to wreck the joint on Steve Bruce’s homecoming. Emery needs to ensure that it is that trio having all the fun, rather than everyone else revelling in his defence’s demise.

Team to watch – Aston Villa
Villa’s £130million spree on 12 players was as necessary as it was lavish since 10 Villans have left the club and six loanees were due to return to their parent clubs. But it all makes Dean Smith’s side an unknown quantity at the start of the season.

There are obvious parallels with Fulham, who revamped their squad last season before failing spectacularly. But Smith did the majority of his business early in contrast to the Cottagers scrambling around just before the deadline a year ago. Still, only a positive start, in terms of performance if not results, will quash the comparisons.

Retaining the heart of last season’s promotion push will certainly help. Their only deadline day signing was John McGinn, with last term’s Player of the Year and a favourite of Sir Alex Ferguson committing for five years. Jack Grealish might have been lining up against Villa this weekend had he joined Tottenham as expected last summer, but he and McGinn will relish getting stuck into and taking on into Spurs’ new midfield duo of Tanguy Ndombele and Giovani Lo Celso.

Grealish will be charged with servicing new forward Wesley and though Villa have scored 16 goals in five pre-season games, the only area Smith might be short is through the middle. Wesley, a £22million recruit, will have to hit the ground running against Spurs’ seasoned central defenders.

Villa have won their last three Premier League openers, including one triumph across north London at Arsenal. A fourth would certainly quieten the Fulham fears.

Player to watch – Paul Pogba
On the opening weekend of the season immediately after the closure of the transfer window, the focus inevitably turns to the new boys and what first impressions they might offer. But those who didn’t get their moves are equally fascinating to watch. Until Thursday, Wilfried Zaha can’t have been sure which side he would be playing for at Selhurst Park on Saturday.

Pogba seemed rather more certain that he wouldn’t be lining up for Manchester United this weekend judging from his comments about looking for “a new challenge” and all the eyelash fluttering at Real Madrid. Sadly for Pogba, Florentino Perez did not share Zinedine Zidane’s determination to bring the Frenchman to Madrid so the midfielder is stuck in Manchester.

You have to presume that is where he will remain beyond the end of the European transfer window since United refused to bring in a replacement – not just for him, but also for the long-departed duo of Marouane Fellaini and Ander Herrera. United wanted to keep Pogba; now they simply have to.

Let’s see how he reacts to not getting his way. Jose Mourinho could not find a system that satisfied the record signing and Solskjaer tinkered with a few last season, too. Now it seems the United boss is set on 4-2-3-1 with Pogba playing from deep next to a ball-winner. It is a position he SHOULD excel in.

Whether he does or he doesn’t on Sunday should offer us an idea of his mindset. Towards the end of last season, he didn’t bother to hide his disinterest. That will not be tolerated while Man Utd begin their new era – albeit with many of the same players who flopped in the old one.

If either side plays like they did on the opening weekend, it should be a foregone conclusion. Leeds flew out of the blocks, outclassing Bristol City at Ashton Gate, and while Forest began well themselves, their flying start lasted around 20 minutes before West Brom got a foothold and came from behind to win at the City Ground.

Leeds don’t usually need the kind of charity Man City loanee Aro Muric showed on his debut in the Forest sticks last week and Sabri Lamouchi will have to wade through the 327 players at his disposal to form a watertight defence with Pablo Hernandez in the kind of form he was last week and for much of pre-season. Still, if Kiko Casilla keeps Leeds’ goal, Muric will be in similarly calamitous company. Bielsa also has a headache up front with a couple of new strikers at his disposal in Helder Costa looking for his first start and Arsenal loanee Eddie Nketiah hoping for any involvement whatsoever. But Patrick Bamford got the nod last week and scored, suggesting Costa and Nketiah will have to sit tight for now.

After Saturday, it will be two whole days before Leeds are back on Sky.

European game to watch – PSG v Nimes
Of the major European leagues, only Ligue Un and the Eredivisie get underway this weekend. So it’s a good opportunity to check in with PSG as they kick-off their stroll to the French title at home to Nimes on Sunday night.

Attention should be on the Parisiens’ new boys, with Idrissa Gueye and Abdou Diallo both vying for debuts – Ander Herrera is crocked until next month – but much of the focus will be on Neymar. PSG wanted the Brazilian’s situation sorted in time for the start of the season but unsurprisingly, there is hardly a queue of clubs looking to relieve them of his salary and his bullsh*t.

If, as expected, no deal to shift Neymar is agreed by Sunday, PSG reportedly want their prized asset available to play – not an unreasonable expectation since they continue to deposit a mega-f*ck-tonne of cash into his bank account at the end of each month. Neymar is rather less enthused over the prospect of lining up against Nimes. It will be worth tuning in just to see how little the megastar tries should Thomas Tuchel wheel him out at the Parc des Princes.