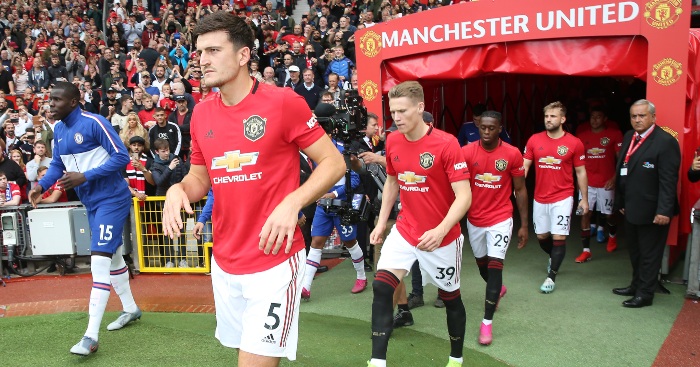 They were hardly perfect that day and, at the time, most accepted that the scoreline had been a distortion, but even the genuine positives – the efficiency, the quick transitions, the intent – are looking like false indicators now.

In fact, the further away United get from that opening day, the more of an anomaly it seems. The trip to Wolves suggested that the initial burst of attacking life was illusory. The home defeat to Crystal Palace confirmed it. And the failure to beat a ten-man Southampton was, at times, desperate in the lack of invention at its heart.

So this is a very significant game for Ole Gunnar Solskjaer, particularly because United’s upcoming fixtures look so unforgiving. Following Leicester’s visit, they’ll travel to West Ham and Newcastle in the Premier League, either side of a home game with a flawed, but potentially destructive Arsenal. Solskjaer really, really can’t lose here.

Leicester are an obviously dangerous opponent but, for them, this is a chance to heed the lessons learned at Stamford Bridge back in August. They would eventually outplay Chelsea that day, looking every inch a top-six contender by full-time, but they began the game with an inferiority that proved self-defeating. It wasn’t until the second half that they exhibited any real conviction in their (obvious) talent so while a point was still a good result, the impression left was of a missed opportunity and of a team who didn’t quite believe their own hype.

There was no need for that doubt. Just as there isn’t on Saturday. This is a young team. Of the side which started against Bournemouth, seven players were under the age of 26; the rest were Premier League title winners. So Brendan Rodgers has a healthy balance of youth and experience, but part of converting potential into something more tangible is learning to disregard the reputations of the big clubs.

Are Leicester better than United? It’s hard to say. But they certainly make more sense. They have the better coach and they’re closer to what they would ideally like to become. So that’s the challenge: recognise that contextual advantage and don’t tip-toe into another big stadium.

Player to watch – Harry Maguire
His start to United life has been okay. Not great, but not bad. Unfortunately, that £80m transfer makes shrugging indifference disproportionate. Maguire doesn’t need a big performance, but coming off the back of an off-colour international break and, with the background of United’s own slightly limp start to the season, he (and they) could probably do with one.

For once, there’s no great animosity between a recently transferred player and his former club – everyone seemed relatively happy about the deal – but it still makes for a compelling framework. It’s interesting in the detail, too, because Leicester will bring Jamie Vardy to Old Trafford and, presumably, will do whatever they can to play him behind United’s back four.

Is Maguire capable of nullifying that threat? Pace is often portrayed as something which can’t be defended, but that isn’t true and that’s proven by the best centre-halves in the game. They anticipate and move in a way which somehow makes speed less relevant and, typically, that calibre of player ends up looking quite limited as a result.

Not that Leicester’s threat is one dimensional. Behind Vardy lie all those artisans, each of them capable of inflicting damage in different ways. James Maddison with his delivery and from around the box. Youri Tielemans with those late, breaking runs beyond his covering midfielder. Ayoze Perez with that hybrid set of abilities, which makes him half-wide-forward, half-striker.

The responsibility for containing all of that doesn’t fall solely on Maguire, but he is the featured defender within the group and, for better or worse, his performance will be subject to the most scrutiny. He’ll have bigger days. There will also be better times to judge him – weeks, months, years from now. But this is the most important game of his Manchester United career to this point.

Manager to watch – Quique Sanchez Flores
The die was probably cast for Javi Gracia on the opening day of the season; few head coaches lose 3-0 at home to Brighton and live to tell the tale.

Whether sacking him was the right decision is a different issue. But it’s happened, Quique Sanchez Flores has returned to replace him, and all of a sudden Watford are being discussed in that familiar, disparaging way again. Gary Lineker is mocking them on Twitter, columnists are describing them as a symptom of modern football.

“It was a very easy decision. I’ve been a coach for 16 years and this the time I spent in Watford I was really happy. It was a good experience and this experience was amazing. I had good people around and an amazing feeling with fans.”

Sanchez Flores himself has also begun his second stint with a half-truth. The first half of that year may have been happy, but we know that the second was plagued by insecurity and discontent and, eventually, a growing tension between him and his employers. He’s not hugely keen on Jose Holebas, either.

But what’s interesting is that Flores might be joining a different club to the one he left. Or, at least, one which now has a few Premier League seasons behind it and a growing appetite for continuity. Gracia ultimately didn’t attest to that in the way he might have done, but the contract extension he signed in November 2018 did signal the club’s intent to gradually disassociate themselves from their previous culture.

So the working conditions have changed. In itself that’s intriguing, because Flores has never spent more than two years managing any club. This is his 11th different job in 15 years. It’s not the first time he’s returned to a club either, having had two separate spells in charge of Getafe (2004-2005, 2015).

Presumably, what made him attractive to Watford in 2015 was that experience of working in short bursts. How, then, does he serve the objectives going forward? Does he represent a reversion to that initial strategy or are Scott Duxbury and Gino Pozzo willing to give him an opportunity to work in the three-dimensional sense – to suffer the game’s cycles, and to then adapt and learn from them?

People knock Watford, but this is what makes them compelling. They’re modern and different, but they change so regularly that the conversation around them never becomes stale. Does that make sense?

Team to watch – West Ham
West Ham are actually quite good. At least, they’ve bought really well over the summer and, for once, don’t seem to have been taken advantage of in the transfer market. In circumstances not entirely unrelated, the behind-the-scenes characters are becoming less and less visible, which is also highly encouraging. Gold, Sullivan and Brady are business people, they are not among football’s great thinkers; finally, that penny seems to have dropped.

They’re still West Ham, so impending calamity can never be entirely discounted, but their trip to Villa Park on Monday night is a chance to continue their admirable recovery from that battering they took on the opening weekend. They were resilient at Watford, Felipe Anderson and Sebastien Haller had fine games for different reasons, and they dealt with Norwich (who are not just Teemu Pukki and nothing else) with impressive ease.

They’ve got an inviting month ahead of them, too. They’ll host Manchester United next weekend, then face Bournemouth and Crystal Palace before the next international break. A strong performance against Villa, who are still basking in the novelty of being back at this level, could set them up very nicely for that little run.

I’ll be honest: when people talk about how great the Cowley brothers are, I just nod along in ignorance. The best we can do here, then, is a couple of bland platitudes about a young English coach getting a chance at a high level.

Cowley might have been promising a bright new era for Sheffield Wednesday, but they’ve appointed Garry Monk instead (has he managed all 72 Football League teams yet?). It’s a first game for both, giving this that distinct, new regime freshness which is always alluring.

European game to watch – RB Leipzig vs Bayern Munich
One day, Julian Nagelsmann will coach Bayern Munich. For now, the 32 year-old – 32! – is three games into his new job with RB Leipzig.

And he’s been the architect of the Bundesliga’s only perfect start: three games, three wins, nine goals scored, two conceded. Leipzig are never going to win any popularity contests, but they are worth watching. Timo Werner is a known quantity and he’s started the season in incendiary form, but Nagelsmann is also equipped with a trio of fascinating youngsters. Ibrahima Konate is building on an impressive 2018-19, skilled defender Nordi Mukiele is operating alongside him at centre-half, while midfielder Christopher Nkunku joined from Paris Saint-Germain in the summer.

All three should start and, if you’re lucky, there might be an Ademola Lookman sighting from the bench.

Bayern are stuck in quasi-transition, caught between eras. New signings Ivan Perisic and Philippe Coutinho are really only placeholders until more permanent solutions can be found (Leroy Sane etc) and head coach Niko Kovac continues to look fairly temporary himself. It’s a good time to be playing Bayern.

As an aside, the English clubs have done very well to avoid Leipzig in the Champions League. They should come through a group containing Benfica, Lyon and Zenit fairly comfortably – all three had important parts stolen away during the transfer window – and are capable of bruising a few established egos in the knockout rounds.