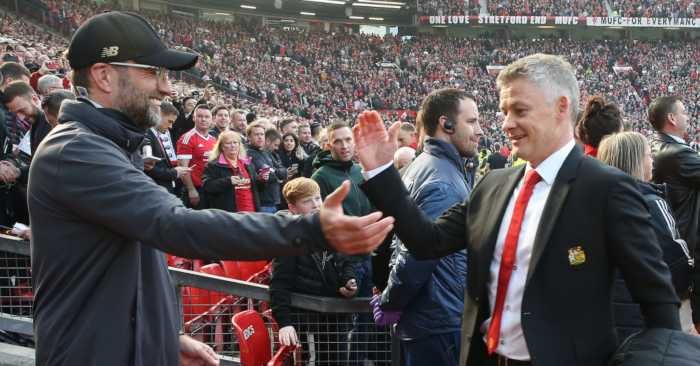 Game to watch: Manchester United v Liverpool
When was the last time United fans went into battle on their own turf against their rivals from the other end of the East Lancs Road feeling this amount of trepidation? When Brendan Rodgers’ title challengers embarrassed David Moyes’ mob? If not then, perhaps never at any point in our lifetimes, unless you happen to be over the age of 40.

The resignation many home supporters will feel when they trudge down Sir Matt Busby Way on Sunday afternoon is entirely understandable. Their team has been hilariously bad of late and this week’s news has not helped: they will have to face a perfect Liverpool without the one player who, if he fancied it, could hurt the Reds and missing another in goal who could limit whatever damage the visitors might inflict.

Ole Gunnar Solskjaer is going to have come up with something. His attack has been woefully impotent against the likes of Rochdale, Newcastle, AZ Alkmaar and West Ham of late so, unless there is to be a major shift, United have little hope of ruffling the feathers of Virgil van Dijk and Joel Matip. One way to do that may be to take Marcus Rashford away from the Liverpool centre-backs and let him loose on the left where, for England, he offered glimpses of the player we know he can be rather than the lost soul we’ve seen pocketed by centre-backs of all levels.

If Solskjaer follows Southgate’s lead, that will at least give Jurgen Klopp something to think about. As Matt Stead wrote, the last time he over-thought a trip to Old Trafford, it went a long way to costing Liverpool the Premier League title.

Indeed, Liverpool are the better team with better players and a better manager in much better form. It should be straightforward for Klopp, but somewhere buried deep within his perma-positive persona, the Reds boss will be wary. Not of United as the wounded animal because, frankly, the vet is fetching his shotgun for Solskjaer’s current mob. But in four visits to Old Trafford he is yet to record a victory. During his reign, only James Milner (penalty) and Eric Bailly (own goal) have scored a Premier League goal for Liverpool in this stadium.

Rather than view the eight-point lead Liverpool hold over Manchester City as reason to avoid going for three more on Sunday, Klopp must be brave. Or rather, Klopp just has to be himself. With victory comes more than three points; Liverpool will equal the records for most consecutive wins at the start of a Premier League season and most consecutive victories overall.

Then there are the consequences that Klopp will claim not to care about, even if everyone else absolutely does. What will defeat – a heavy, humiliating one like those suffered by Moyes and Jose Mourinho to their greatest rivals – mean to United and Solskjaer? The last manager to be shown up by the Reds was sacked two days later. Solskjaer is desperately hoping to avoid the same fate, though his prospects of swerving it appear increasingly remote.

Manager to watch: Marco Silva
Solskjaer and Silva remain the last two managers to take points off Liverpool. This weekend, both will be satisfied just to take gainful employment into next week.

Silva has made no attempt to polish some shine into Everton’s turd of a season so far. How can he? The Toffees lie in the drop zone after one win in eight games, a run which has seen them face only one side from last season’s top six and two promoted teams to whom they lost.

The Portuguese boss admitted that Everton fans were right to be angry with him after the tepid 1-0 defeat at Burnley. About the next game, Saturday’s visit of West Ham, Silva said: “When I say to you it is a must-win game, it is a must-win game, we should win that game, we must win that game to get the three points and get a better position on the table and grow our confidence.”

Silva can see that those are not the only reasons victory or compulsory. Reports suggest that the manager has been given three games to save his job, with a trip to Brighton and a Carabao Cup clash against his former side Watford to come before the end of the month. But no ground does angry quite like Goodison Park.

Everton supporters don’t want to hear about Silva’s first-choice midfield pairing being unavailable, having seen every unit of their team fail at some point during four consecutive Premier League defeats. Should that run continue, or even if they pick up an uninspiring point, Goodison will go for the manager and more than likely, so too will the owner.

Team to watch: Manchester City
Pep Guardiola is also at the must-win stage, though at stake for the Manchester City boss is the Premier League title rather than his job.

The champions are already staring at an eight-point deficit and while in years gone by, this weekend might have been seen as an opportunity to make up some ground, Crystal Palace are good now and United, well…

Indeed, Pep might be more worried about the prospect of being leapfrogged by Roy Hodgson in the table this weekend rather than looking ahead into the distance through Liverpool’s dust. Palace are sixth but only two points behind the Treble winners and reputations mean f*ck all to Roy’s boys.

The Eagles remain the last away team to have won at all of the Etihad, the Emirates, Anfield and Old Trafford. They scored three times in each of their last visits to the first of those three grounds while United were put to the sword earlier this term.

How the hell has this happened? Simple, really. Palace have mastered the art of defending resolutely and breaking with ruthless speed and efficiency. Even though they welcome City to their own patch on Saturday, that will once more be Hodgson’s formula.

How can City counter it? The element of surprise around Palace is gone now so Guardiola has no excuse for not preventing his two centre-backs and Rodri from being exposed, as they were in both of their defeats this term to Wolves and Norwich. It says much about their vulnerability at centre-back that John Stones’ return is being greeted with widespread relief. Towards the back end of the season, he couldn’t get in the team and for the derby, the England defender couldn’t make the bench.

At least Kevin De Bruyne is back. The Belgium star, probably the Premier League’s finest player, has not started two games this term. You’ll never guess which they were…

Player to watch: Juan Foyth
All the Tottenham players will have their performance heavily scrutinised this weekend when the Premier League’s bottom club visit a side arguably in even greater disarray. The first point of interest will focus on which ones Mauricio Pochettino will pick. None of those who featured in the miserable defeat at Brighton last week could argue if they had their backside benched on Saturday.

After conceding 10 goals in two matches, Pochettino is almost certain to drop one of his centre-backs with Davinson Sanchez set to come in for either Toby Alderweireld or Jan Vertonghen. To their right, change seems inevitable with Pochettino hoping the fifth time’s a charm.

Having used Sanchez, Serge Aurier, Kyle Walker-Peters and Moussa Sissoko, Pochettino is still scratching around for a competent right-back. His plan to try Foyth on the flank was scuppered by a pre-season injury but the 21-year-old was on the bench at Brighton and he played his first minutes of the season during the international break at right-back for Argentina.

Foyth insisted he was ready before the break, though Pochettino refused to rush him. But now is the time for the Foyth experiment to commence – and it’s anyone’s guess as to what results it might yield.

Foyth was recruited as a centre-back and the suspicion remains that he is being used as a full-back because he struggles to cope with the physicality in the middle. He is not an obvious right-back in the mould of Pochettino’s previous fliers and there is little encouragement while playing for Argentina for Foyth to thunder forward. But Pochettino believes that his lack of speed and strength can be compensated for with his technical proficiency.

There is no better time for Foyth to give it a go, if for no other reason other than the fact it would be hard for the youngster to fare any worse than some of Pochettino’s previous picks.

Football League match to watch: Blackburn v Huddersfield
We can’t lie, Sky Sports’ Football League offering this weekend is not one to get the pulses racing. On Friday night, you can watch Cardiff host Sheffield Wednesday while on Sunday, you might – but probably won’t – warm up for Man Utd v Liverpool with 20th-placed Accrington hosting high-flying Ipswich at midday before the Championship leaders Nottingham Forest head to Wigan.

So for your EFL fix, why not do what Daniel Storey did and check in on the Cowley revolution just starting at Huddersfield? Town began to turn their season around before the international break with consecutive victories for the first time in 20 months which featured four goals and a pair of clean sheets.

Town head to Ewood Park to face a Rovers side in contrasting form. After four wins in six, Tony Mowbray’s men have picked up only one of the last nine points available to them. With half of Rovers’ defence requiring a revamp due to injuries to Darragh Lenihan and Greg Cunningham, Mowbray might be content with steadying the ship.

European game to watch: Borussia Dortmund v Borussia Monchengladbach
On a weekend of few stand-out matches on the continent, the big Borussia derby stands out as last year’s runners up host this season’s surprise leaders.

How have ‘Gladbach done it? Simple: they’re scoring lots of goals – only Bayern have netted more – and conceding few, with only Wolfsburg boasting a better defensive record.

Former RB Salzburg boss Marco Rose – a coach about whom Jurgen Klopp said “he can have any job and could do any job too, he is really the most hyped of all at the moment.” – has got ‘Gladbach pressing from the front and the new style is paying immediate dividends at both ends.

For eighth-placed Dortmund, that story is only half true. In attack, Jadon Sancho, Paco Alcacer and Marco Reus have got off to a fine start but Alcacer’s progress was halted by an Achilles injury. The striker should be back to face ‘Gladbach but Dortmund’s problems are at the other end.

“It’s a fact we are conceding too many goals, especially from set-pieces,” said sporting director Michael Zorc. “We’re lacking the necessary concentration and absolute decisiveness. In those situations, the players have to behave differently.”

Dortmund’s incentive for defensive improvement: a win over ‘Gladbach would take them to within another victory of whichever side tops the Bundesliga come the end of the weekend.