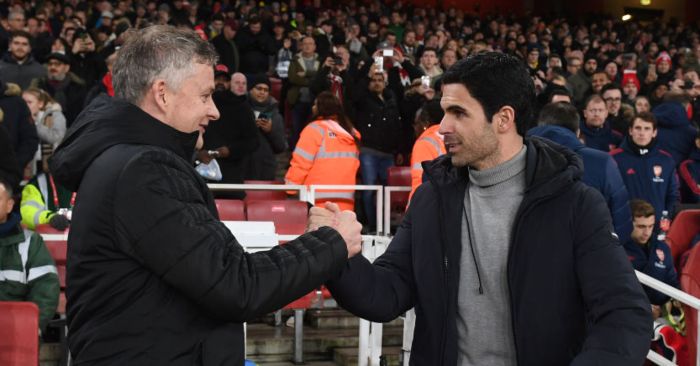 After two 1-0 defeats on the bounce – the second a particularly turgid display at home to Leicester – Mikel Arteta needs a result perhaps even more than Ole Gunnar Solskjaer. Who would have thought that a couple of weeks ago?

Since the 6-1 defeat to Tottenham, United have beaten two of last year’s Champions League semi-finalists, scored 11 goals and kept two clean sheets. Solskjaer has gone from execrable to excellent, Harry Maguire is no longer the worst and Marcus Rashford is definitely the best.

That said, they are still 15th in the Premier League. But victory over Arsenal at Old Trafford will take them above the Gunners with a game in hand, and will likely exert the first real tinges of pressure on Arteta after ten months in charge at the Emirates.

Arsenal are getting a taste of what life would be like without talismanic striker Pierre-Emerick Aubameyang despite managing, crucially, to hold on to him in the summer. The captain – who scored 40% of their league goals last season – has now gone five games without one, his longest barren spell since 2014. Arteta desperately needs him to rediscover his touch.

“Hakim Ziyech has worked really hard to be fit, and I was very excited to get his quality into the team,” Frank Lampard said after the Moroccan’s full debut for Chelsea against Krasnodar. “He brought a lot of quality and calmness when he was on the pitch, and got a well-deserved goal.”

Lampard went on to hail his “personality to receive the ball”, but more impressive was the desire to take risks. Chelsea’s attack so far this season has too often been predictable. Not pedestrian exactly, but far from the high-tempo, dynamic, exciting, up and at ’em style many were expecting after a summer splurge on forward talent. Particularly as that was on show at times last season.

They’ve been waiting for Ziyech: he’s the master creator. Since joining Ajax in 2017/18 (take a breath) he had the most shots, the most shots on target, created the most Big Chances, scored the most goals from outside the box, won the most penalties, played the most through balls and claimed the most assists. He was directly involved in a shot – either taking one himself or setting one up – every 9.6 minutes on average. That’s bonkers.

Kai Havertz has had a slow, unassuming start to his Chelsea career, but there were signs of a burgeoning union with Ziyech on Wednesday. Essentially, getting the ball to Ziyech and gamboling into the box should be the German midfielder’s bread and butter. Then the goals will flow. But maybe not against Burnley.

There’s a noticeable attempt from Nuno Espirito Santo to alter Wolves’ approach this season. After two campaigns and two seventh placed finishes with football that requires little possession, lots of pace and incredible fitness levels, it’s as though he’s recognised that they’ve reached their peak playing in this manner.

The old method can and probably will remain successful against bigger teams, but against most – those that now see Wolves as their superior – they need to find a new way. Ceding possession and counter-attacking doesn’t work if the team you’re playing doesn’t bother trying to hold on to the ball.

“It’s difficult to play against these things, they come only to see if they can get a point,” Raul Jimenez said after Newcastle nicked a point at Molineux last weekend. “They never did something to win the game, so it’s difficult to break them. We have to be focused on that. Since we’ve been promoted to the Premier League, these kind of games have been the most difficult for us, I think. We have to start doing better against this.”

And Wolves and Nuno face the ultimate safe-breaker challenge on Friday, when Roy Hodgson takes the Crystal Palace vault to the West Midlands. In their last two outings, the 1-1 draw with Brighton and the 2-1 win over Fulham, Palace have conceded more shots in total than they’ve had possession on average.

Tottenham somehow, suddenly look the business. They’ve got a deep squad (though don’t mention Dele Alli), the most deadly strikers in the Premier League and, yes, a very good manager.

Jose Mourinho didn’t lose his Mojo, he managed Manchester United. The libido, the life force, the essence, the right stuff, what the French call a certain ‘I don’t know what’, remains.

Rivals concerned after their 6-1 destruction of United will have been equally, if not more perturbed by the battling 1-0 win away at Burnley, with Son Heung-min’s winner met with a war cry from the touchline from Mourinho, who has made a name and a living on victories such as those. There’s a feeling of dangerous unity about Spurs.

They host Brighton on Sunday, who will try to keep the ball, which could well end up being the worst thing for them. Harry Kane and Son will smell blood.

Their last Premier League meeting, in 2007, saw classic battles between Nwankwo Kanu and Hermann Hreidarsson; Dennis Rommedahl and Glen Johnson. They’ve played each other on four occasions since, with Charlton winning three of them, all in League One.

And there they find each other again, after Charlton’s relegation from the Championship and Portsmouth’s second successive loss in the play-off semi-final. Eleven goals from Portsmouth’s front two, John Marquis and Marcus Harness, have driven them to fifth, one point above sixth-placed Charlton who have a game in hand.

Napoli – who sit second above Sassuolo on goal difference – have 14, but Gennaro Gattuso’s team are also keeping clean sheets. Snore. There should be goals, anyway.