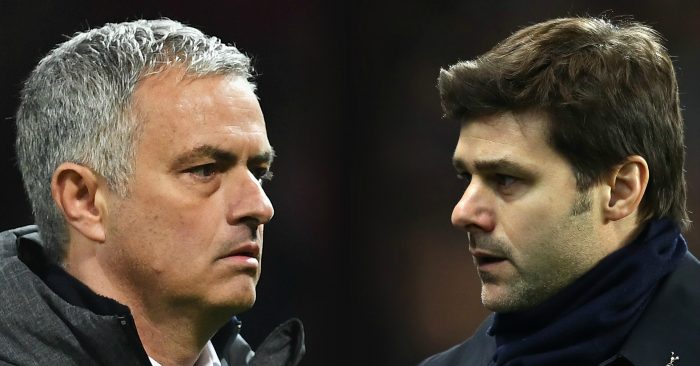 Game to watch – Manchester United vs Tottenham
“I don’t believe the FA Cup is going to change our lives,” said Mauricio Pochettino in his pre-match press conference, continuing his mission to devalue Tottenham’s interest in the competition despite plenty of players and plenty more supporters vociferously disagreeing with that assessment.

It’s an odd stance to take, mostly because saying the opposite would be the easier and politically savvy thing to do. “I want to win the FA Cup” is not news; “I’m not arsed really” is. But it also invites pressure upon Pochettino. Lose to Manchester United on Saturday, even if Tottenham play well, and the accusation inevitably follows that it was the manager’s attitude that caused it. That makes Saturday’s performance, coming off the back of two poor displays, particularly important.

Yet if Saturday is crucial for Pochettino, it’s nothing compared to how much Jose Mourinho needs this. Nothing can atone for the 16-point gap to Manchester City in the Premier League and dismal Champions League elimination, but Mourinho is a man who prides himself on second-season trophies. Ending this campaign without any trinket leaves him spouting his line about past league titles like a washed-up boxer reminiscing on past bouts.

But Manchester United need vast improvement. They were outclassed by Spurs in the league fixture at Wembley, caught off guard by their opponents’ fast start and never threatened to grab hold of the match and respond. Turn in the same performance again and expect the same result.

But we rarely know which United is going to turn up. This is the baffling thing about Mourinho at Old Trafford. For a manager who usually prides himself on team morale and consistency in performance, United have thrown in some unexpectedly shambolic displays. Victory over Manchester City followed by West Brom defeat. Victory over Liverpool followed by Sevilla exit. Victory over Tottenham at Old Trafford followed by Chelsea defeat in their next league game. Victory away at Benfica followed by loss at Huddersfield. Just when you think you have this team figured out…

Player to watch – Pierre-Emerick Aubameyang
This is a slightly false start to Aubameyang’s Arsenal career. When it became clear that a deal would be done for the striker to join, Arsenal were five points from the top four, had just reached the EFL Cup final and were still in the Europa League. Aubameyang knew that he would be cup-tied in Europe, but was hoping to lead Arsenal back into the Champions League via league form and win a trophy within a month of his arrival.

It didn’t quite go to plan. Arsenal promptly lost four of their next five league games and were humped by Manchester City in the EFL Cup final. Suddenly Aubameyang had no crucial games to play until August.

Still, there is something wonderful about watching an excellent striker playing with the freedom afforded by games that don’t have any lasting legacy. Aubameyang has played with a smile on his face, scoring six times and providing two more assists in 701 league minutes. He is the club’s second highest goalscorer after only eight matches.

Given that West Ham have kept three clean sheets in their last 32 away league games, you might expect that fun to continue this weekend. Bring on the smiles.

Manager to watch – David Moyes
It looks like David Moyes has won his power battle at West Ham. Not only does 26 points from 22 league games and limp FA Cup exit get you an extended contract at a club with top-half ambitions, it also grants you carte blanche over transfer dealings. West Ham’s continued ability to baffle knows no bounds.

If Moyes is going to prove his worth to supporters, competing with teams like Arsenal is a fine way to do it. Arsene Wenger’s team have been pitiful away from home and have rested players in their recent Premier League performances, but their home form has been ruthless. With four full days before the first leg against Atletico, it would be a surprise if Wenger didn’t pick at least a few first-teamers.

West Ham are surely safe, but their form between now and the end of the season will help supporters make up their minds as to whether Moyes is indeed deserving of West Ham’s faith, or if the club are making another major mistake and tripping themselves up in pursuit of progress.

Team to watch – Stoke City
The news filtering out of Stoke City is that Paul Lambert will be kept on as manager even if the club are relegated from the Premier League. That not only hints that his appointment was made with one eye on relegation despite it being far from a formality at the time, it suggests that Stoke consider Lambert to have done a decent enough job until now.

If that last assumption is indeed true, it is a generous assessment. Lambert won his first league game in charge at home to Huddersfield, and since then has taken five points from ten matches. To pretend that he is untainted by this relegation is a nonsense.

The battle to stay up has probably already been lost. Stoke are as short as 1/16 to be relegated, and anything other than victory over Burnley on Sunday would make it almost mathematically certain. The last embers of Stoke’s fight were lost in the final moments at the London Stadium on Monday evening.

But this about more than staying up. If Lambert is to be considered fit for purpose in the Championship – which will be more a competitive league than ever before next season – we must see signs of progress in this Stoke team between now and mid-May. That starts against Burnley on Sunday.

One-on-one battle to watch – Ryan Bertrand vs Willian
Southampton may have had a season of tedium ending in likely eventual misery, but Ryan Bertrand deserves to be absolved of any significant blame. The left-back would walk into a team comprised of bottom-half players (be right back, just off to make my XI), and will surely get a move to the Premier League’s upper reaches over the summer; perhaps even top six.

On Sunday, he will be key to Southampton’s chances of upsetting Chelsea and giving fans some reason to cheer a side managed by Mark Hughes that is heading back to the Championship. For all the brilliance of Eden Hazard – and he remains Chelsea’s most talented player – it is Willian who has most carried the creative responsibility over the last fortnight.

Having scored twice in the semi-final at Wembley last season, Willian clearly relishes playing in the stadium. He’s as long as 5/2 to score on Saturday, but I’d wait for a price on the anytime assist or Man of the Match.

Football League game to watch – Millwall vs Fulham
There’s nothing like a must-win game for both sides for different reasons to signal that the domestic football season is in its final throes. Fulham’s chances of automatic promotion might just have been extinguished by Brentford’s last-second equaliser last Saturday, but Slavisa Jokanovic knows that victory over Millwall on Friday evening puts the pressure on Cardiff City to win their games in hand.

Millwall too cannot afford to settle for a point. They lie a point ahead of Derby in seventh but also are within four points of Preston, Sheffield United, Brentford and Bristol City all the way down in 11th with Middlesbrough and Aston Villa still to play. The end of the regular Championship season promises to be fraught, even if the Premier League is virtually done and dusted.

The added layer of intrigue is provided by the fact that these two clubs could well meet in the play-offs between May 11th and 15th. Time to lay down a psychological marker.

Leipzig vs Hoffenheim is not televised, but sets things up perfectly for the later game. The winner will be either one or two points behind the Champions League places. That leaves Leverkusen and Dortmund, level on points in third and fourth, to play off and leave the winner virtually certain of Champions League qualification. The loser will worry about the looming presence below them.