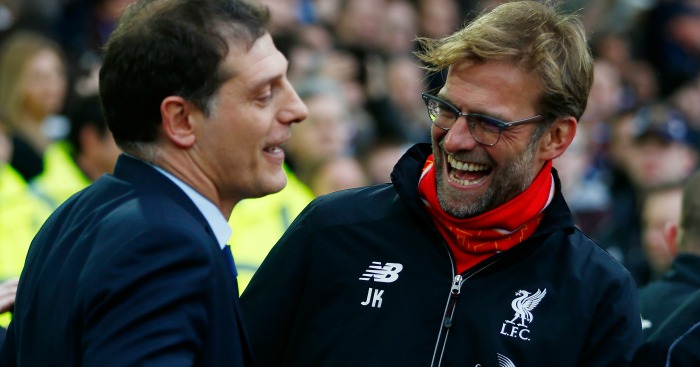 Game to watch – West Ham v Swansea
It was perhaps as close to celebrating a Tottenham win as any self-respecting, law-abiding West Ham fan would ever come. Mauricio Pochettino’s side kept alive their slim Premier League title hopes with a dramatic comeback in midweek, but the result had implications at the other end of the table too.

Had Swansea held on against Spurs at the Liberty Stadium on Wednesday, they would enter Saturday’s trip to West Ham just two points behind their beleaguered hosts. The gap remains at five, but that does not dilute the importance of this fixture.

Defeat to Arsenal was expected for the Hammers, but yet another listless, uninspired performance did little to alleviate fan fears. It was their fifth consecutive loss, and their last victory came on February 4. The only other Premier League sides not to have won a league game since that date are Middlesbrough and Sunderland. That is the sort of company no team should aspire to keep.

But then West Ham are no ordinary team. They are fractured, a club with an unpopular board deemed out of touch, a manager incapable of answering a growing number of questions, a fanbase disillusioned and disgruntled, and a stadium that would look rather out of place in the Championship. And while relegation once seemed a distant possibility, it is now peeking over the hilltop.

Perhaps most alarming for the Hammers is that, in the midst of their terrible form, their next two fixtures are their most winnable in the run-in. After hosting Swansea, they travel to Sunderland. Their final five games include trips to Stoke and Burnley, while Everton, Tottenham and Liverpool visit the London Stadium. They really have to avoid defeat on Saturday.

Swansea, on the other hand, have to win. Hull’s revival leaves them in the relegation zone once more, two points adrift of safety. To beat West Ham would be to drag them further into the mire, while simultaneously improving their own standing. It is must-win for them, and must-not-lose for their opponents.

Player to watch – Mesut Ozil
It felt as though he had taken the analogy a little too far. Just three days had passed since Gary Neville compared Mesut Ozil to a coal miner when the Arsenal midfielder produced a diamond of a performance to secure a morale-boosting victory. Oh yes, I went there.

Ozil himself could hardly have chosen kinder opponents than West Ham, but the identity of the team matters not. The German scored his first goal since December, and even laid on Theo Walcott for his strike. It was only the second time he had scored and assisted a goal in a single Premier League this season; the first came in the reverse fixture against the Hammers four months ago.

It has been a difficult period for Ozil, but he must now prove that his showing against West Ham was the permanent class to end the poor temporary form. Monday’s game with a rejuvenated Crystal Palace at Selhurst Park is a more difficult assignment than it first looks. There is a top four race still to run, and Arsenal are a notably improved side when he plays well.

Manchester City never do make it easy, and midweek defeat to Chelsea really does leave Champions League qualification in jeopardy. They remain in that coveted fourth spot, but the warm breath of both Arsenal and Manchester United is brushing the back of their neck.

A nightmare run of three fixtures against fellow top six sides could not quite be navigated unbeaten, but Pep Guardiola must quickly reassemble his troops, for Hull are to visit the Etihad Stadium.

The Tigers’ last away win came against Bristol City in October, but Marco Silva’s side cannot be underestimated. Guardiola and his players have failed easier assignments this season.

The last three sides City have beaten in all competitions are Middlesbrough, Sunderland and Huddersfield. City must ensure Hull join that eclectic trio, because Arsenal and United will be waiting to capitalise on even the slightest of slips over this final month.

Whatever moniker will be bestowed upon Liverpool’s trip to Stoke on Saturday, it is one Jurgen Klopp cannot afford to lose. Victory over Bournemouth would have afforded the Reds some much-needed breathing space, but Josh King had other ideas.

If Klopp considered that draw particularly vomit-inducing, a meeting with Stoke could lead to yet more panicked nausea. The Reds will have to find a way to counter their mid-table Kryptonite if Champions League football is to return to Anfield.

Most notable from the Bournemouth draw was that Klopp finally pioneered a ‘Plan B’ at Liverpool. They switched to a three-man defence in the second half against the Cherries. The experiment failed; they led 2-1 at that stage, and would go on to draw 2-2.

But one of the most disappointing aspects of Klopp’s season resurfaced at Anfield. Philippe Coutinho’s substitution on the hour mark was unfortunate, but the decision to replace him with Joel Matip remains contentious to this day. Daniel Sturridge was left on the bench to ponder his future.

Klopp will hope his tactical nous and substitution instincts are not required against Stoke, but he must be prepared to make braver alterations when necessary.

They had made up by Wednesday, and Shaw was named in the matchday squad against Everton. He came on as a substitute and earned a penalty which kept Manchester United’s remarkable unbeaten run intact. Yet Mourinho still somehow managed to degrade the achievement, while the left-back addressed his manager’s comments 24 hours later.

Shaw will now train on Thursday and Friday and Saturday, and hope to play on Sunday.

Football League game to watch – Sheffield Wednesday v Newcastle
It is something of a stellar weekend of football in the Championship, with Gary Rowett returning to troubled Birmingham as Derby manager, Wigan and Rotherham facing off in a contest to prove who is the second tier’s worst team, and Leeds hosting Preston in a battle of the play-off hopefuls.

But by Saturday evening the dust will have settled, and attention will turn to Hillsborough. Newcastle, closing in on automatic promotion, are obviously being televised. Wednesday will appreciate the attention, but are in the final play-off spot and only two points ahead of Fulham.

European game to watch – Bayern Munich v Borussia Dortmund
Der Klassiker no longer has the same impact it once did, with Dortmund struggling domestically as they saunter into the Champions League latter stages. Bayern, top now by ten points, would love to condemn their bitter rivals to a season without Europe’s elite competition.

Dortmund will have one eye on the quarter-final first leg against Monaco on Tuesday, but that does not mean Bayern will enjoy a comfortable Saturday evening stroll. Champions League qualification for next season is not yet secured, while this is a precursor to the DFB-Pokal semi-final. Tasty.

Where is Mike Dean this week?
He is shrugging at Charlie Adam, reminding him that he had already been warned once, and explaining that he has given him no choice after his 427th poorly timed slide tackle. That’s right: he’s at the Britannia Stadium for Stoke’s match with Liverpool.

Fun fact: It will be only the third Liverpool game ever that Dean has officiated.