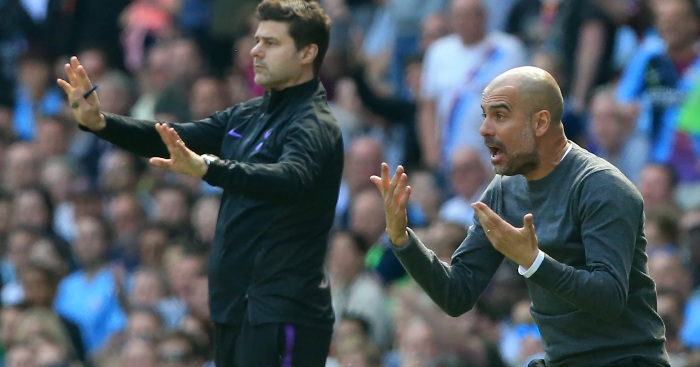 Game to watch – Manchester City v Tottenham
Pep versus Poch would be the must-see match of any weekend, even when six of last season’s top nine face each other over three days.

Both sides made statements on the opening weekend but each manager is expecting major improvements at the Etihad on Saturday evening. Pep Guardiola watched his team turn over West Ham 5-0 at the London Stadium but still found plenty of reason to be concerned by City’s ‘sloppiness’ and a lack of ‘rhythm’. That and a history of team selections designed to keep Mauricio Pochettino on his toes suggests there may be changes for the Treble winners.

Sergio Aguero and Bernardo Silva began the trip to West Ham on the bench but both might be expecting a more prominent role this weekend. Rodri made his first Premier League start and after a shaky opening – like the rest of his team-mates – the Spanish midfielder settled down to offer some early encouragement that Guardiola has indeed found his heir to Fernandino’s throne. But a more scrutinous assessment of his credentials will come on his first home start.

We don’t know yet exactly who will perform that examination. Tottenham got off to a winning start against Villa but only after Pochettino introduced Christian Eriksen from the bench in the second half. Before the playmaker’s arrival, Spurs huffed and puffed without the necessary subtlety to break Villa down. Harry Kane took it upon himself to do it all, straying wide and providing a couple of deliveries that he would have preferred to be meeting in the box. Only when Eriksen drifted between the lines of Villa’s massed ranks did the visitors begin to look rattled.

While Eriksen was able to offer his assistance, Giovani Lo Celso and Ryan Sessegnon could only watch on. Pochettino felt neither deadline day signing was ready for duty 48 hours after their arrival. It would be a huge surprise if Eriksen remains on the bench while presumably one, if maybe not both, of the new boys will get at least a taste of the action.

Jan Vertonghen was rather less able to understand his watching brief last weekend, when Pochettino claimed he felt Toby Alderweireld and Davinson Sanchez were better equipped to handle Villa’s unpredictability on their Premier League return. But in the first half especially, Wesley gave Pochettino reason to question that judgement. There are all sorts of other theories over Vertonghen’s absence last week; whether he is involved in the effort to stop the Premier League’s most rampant attack could either dispel or lend further credence to many of them.

Even at this early stage of the campaign, both managers will be looking upon this weekend as an opportunity to land a blow on a heavyweight title rival. Few believe Spurs have a prayer in the same ring as either City or Liverpool, perhaps even less so than last season when they hokey-cokeyed in and out of the title race, despite having bulked up more considerably than the top two since. This is their chance to state their intent, and City’s opportunity to swat them away once more.

Player to watch – Harry Maguire
The world’s most expensive defender emerged from the scrutiny of last Sunday’s Manchester United debut with immense credit and the Man of the Match award. Tammy Abraham was pocketed with minimum fuss and the difference his mere presence made to the Red Devils rearguard was obvious for all to see.

But for Maguire, and the rest of Ole Gunnar Solskjaer’s side, a tougher challenge than that of Abraham and a patchwork Chelsea side awaits. On Monday night, United go to Wolverhampton, where they lost twice in 18 days last spring. Nuno’s men ruthlessly exposed United’s soft underbelly, stripping the paper from over the gaping cracks which Solskjaer had kept largely out of sight for the first three months of his reign.

Solskjaer has carried out more remedial work in the transfer window but, as Chelsea showed even amid a 4-0 humping, probably not enough. A more thorough examination of his summer’s work, in terms of recruitment and on the training field, awaits with the scourge of last season’s top six gasping to bloody another big nose.

Twice at Molineux in March and April, United failed to get to grips with Raul Jimenez and Diogo Jota. Their league defeat was Solskjaer’s reign in microcosm: a hugely promising start capped by a goal from one of their youngsters, followed by an alarming deterioration in concentration and discipline. The first concession came from a sloppy giveaway in midfield, the second an owngoal after yet another defensive failure.

The light will shine even brighter on Maguire on Monday. Jimenez turned in two man-of-the-match performances against Chris Smalling and Victor Lindelof, scoring two and having a hand in the others Wolves scored to expose United’s frailties. The £85million centre-back won’t have it as easy as Abraham made it last week.

Manager – Frank Lampard
The second of three meetings between teams all eyeing a place in the top six comes at Stamford Bridge when Brendan Rodgers returns to Chelsea hoping to steal the spotlight from Lampard on his homecoming.

The Chelsea boss has taken the positives from defeats to Manchester United and Liverpool this week and the Super Cup performance certainly offered plenty of encouragement even if they fell short in the shootout. The Blues may be pointless and pot-less in Lampard’s first week in Premier League and European management but there has been a lot to like about his start.

That said, some points to back up the positivity would certainly help sway the pessimists beyond Stamford Bridge. Taking three from a rival for the top six and a manager who probably feels significantly more qualified for his job would be a huge boost ahead of two fixtures over a couple of sides just promoted from the Championship and strongly fancied to return back there.

What might Lampard do differently to steer his players towards their first win? After Wednesday, probably not much. Kurt Zouma offered some reassurance after a nightmare at Old Trafford that he can indeed cope with Jamie Vardy this weekend, while N’Golo Kante looked back to something like his best prior to a visit from his old club. Christian Pulisic was given his first competitive start and a first Premier League start will surely follow against the Foxes.

There is an unfamiliar feeling of unity at Stamford Bridge during these early days under Lampard and two defeats have done little to weaken that resolve. A third would probably stretch it, though.

Team to watch – Watford
While offering “no excuses”, Javi Gracia suggested that the Hornets’ first opening-day defeat in 13 years could serve as a wake-up call. It was the only positive gloss he could reasonably apply to a 3-0 home humbling at the hands of a Brighton side that began the season as many people’s pick to go down.

Handily for Gracia, there are a series of changes he can make to jolt his players from their summer slumber and the identity of this weekend’s opponents should also serve as a shot in the arm. There are few sides that Watford enjoy beating more than Everton following Marco Silva’s defection and the Toffees’ pursuit of their best players. Richarlison made the move, Abdoulaye Doucoure did not and the Hornets need to hope that the midfielder is in the mood to show Everton what they are missing after a miserable false start to the season.

Doucoure scored the opener last weekend, but unfortunately in his own goal. His mishap came after sloppy play from Jose Holebas and Craig Dawson, who was the only new recruit to feature on the opening day. At Everton on Saturday, Gracia will presumably be more inclined to field record signing Ismaila Sarr, especially in the wake of a miserable performance on the wing from Gerard Deulofeu last week that was abruptly ended by a half-time hook. Danny Welbeck could also be involved for the first time.

A more worrying way of looking upon their opening-day defeat is that such form is merely a continuation of last season’s efforts. A run to the FA Cup final shifted the focus away from some ropey league form which saw Gracia’s side slide into the bottom half. For only one week in the entire season did they slip lower than the 11th place in which they finished. That slump fed off the Hornets’ inability to keep the back door closed, though they can take some consolation from the fact that the last team they shut out – way back at the start of February – were Saturday’s opponents.

Indeed, Watford have taken seven of the last nine points available from Everton, even if they haven’t won at Goodison Park in their last 13 visits. Against a side that will be expected to put on a show after their underwhelming start, Gracia could really do with at least a point from the Z Cars derby to fend off more probing questions over where the Hornets are heading.

Football League game to watch – Sunderland v Portsmouth
If you don’t fancy Arsenal versus Burnley on Saturday lunchtime, then Sky Sports are offering as an alternative the latest meeting between two sides who share the same ambition for the season, as well as a simmering-if-unlikely rivalry.

There are 334 miles separating Sunderland and Pompey but the two League One sides became very familiar with one another towards the back end of last season. Having spent much of the season fighting for the title, they met four times in six-and-a-half weeks with barely a cigarette paper between them. Pompey initially triumphed on penalties to win the EFL Trophy at Wembley before a 1-1 draw at Sunderland did neither side any good to reverse slumps towards the play-offs. There they met again, with only a single goal between them over two legs, which took Sunderland on another doomed trip to Wembley.

Familiarity certainly bred contempt between the two sets of supporters, though Sky Sports’ move to make Pompey fans travel the length of the country for a 12:30pm kick-off and the fifth meeting between these two sides in 14 matches may have taken some of the sting out of the occasion. Around 800 Pompey fans will make the trek to watch Kenny Jackett’s side attempt to deny Sunderland their first league win of the season at the third time of asking.

This is not the start Jack Ross needed. A couple of 1-1 draws – and two less-than-encouraging performances – to add to 15 of the same scoreline last season has heightened tension on Wearside, where money problems continue to hamper the Black Cats. Failure to return to the Championship at the second attempt would coincide with the end of parachute payments and leave the club deeper in the mire. For the sake of morale on and off the pitch, Sunderland really need to send their fellow promotion favourites home with nothing to show for their 12-hour round trip.