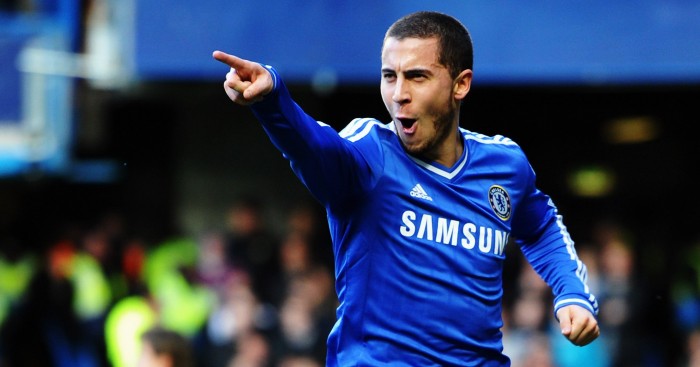 The focus has understandably been on Chelsea’s defence, but Eden Hazard has been notable by his absence. Plus, Rooney, Kane, Van Gaal, Advocaat and Koeman…

Eden Hazard
The most surprising aspect of Chelsea’s false start lies in their defensive fallibility; they have conceded 15.6% of last season’s total in the first two matches. Jose Mourinho will be pleased at the boost to his attacking options, but it is the back line that the manager must know is in need of some further investment. I’m obliged to shout ‘John Stones’ in a loud voice at this point.

That said, Eden Hazard’s initial displays will also have caused plenty of furrowed brows at Stamford Bridge. The Belgian has had just two shots in Chelsea’s opening two games and is yet to contribute either a goal, assist or one of those moments that made him Player of the Year last season. After a major tournament-less summer, the expectation was that Hazard would hit the ground running, continuing his form. Instead he looks subdued, as if fatigued by carrying Chelsea through last season.

“Last season, yes [Hazard was better than Cristiano Ronaldo],” Mourinho said in July. “In spite of the fact that Ronaldo was fantastic. He was fantastic. He scored an incredible number of goals.” The Chelsea manager’s reasons for ego massage are clear, but longevity of high performance is a key part of greatness.

It is far from melodramatic to suggest that when Hazard plays well, so do Chelsea. He was the lifeblood of their success last season, their creative force. The arrival of Pedro gives Mourinho’s attack a shot in the arm, but the Portuguese will feel an awful lot happier when his best player is at the top of his game.

Wayne Rooney
“It’s early on in the season,” said Wayne Rooney this week. “We are just three games in. I’ve experienced this criticism before and the goals will come, I know that. I understand I have to be the one who’s going to lead that line for us and try and find the goals for us.”

One can understand Rooney’s confidence, but his public insistence for patience emphasises the pressure that he has to score regularly this season. Depay’s goals on Tuesday released the tension on the team as a whole after one United player scored in the opening two games, but the weight of expectation remains on United’s captain.

“My mind is clear,” Rooney continued. “I know how to play the role. It’s just a case of getting the chances and taking them, which I’m hopefully going to do soon. I’ve always enjoyed playing against Newcastle, so hopefully on Saturday I can open my scoring. It’s important that we all chip in.”

The cliché with strikers is that the problem only arises when the chances dry up, not the goals. That’s something that Rooney himself alluded to. “It’s just a case of getting the chances and taking them,” is very easily said, but not so easily done. Presumably that’s exactly what he has been doing in the first three games too, and it hasn’t gone well.

So what changes? Does Van Gaal try Mata in the No. 10 role and Young wide right with Depay on the left? Does he instruct Rooney not to drop back in the manner he has done? Does he play Javier Hernandez alongside him (highly unlikely you’d think)?

Or does the manager just hope that Rooney shows a first touch and sharpness more akin to reasonable expectation of his striker? Consider this form a mere blip and new season rustiness, cobwebs blown away by a brace against Newcastle?

Southampton’s defence
In their first 174 minutes of the Premier League season, Southampton conceded five goals. It took them until October 25 to do the same last season.

If their defence was the bedrock of last season’s success, it has been their undoing thus far. That must change quickly, despite Ronald Koeman’s demands for patience.

Louis van Gaal
This week’s Pedro mini-saga has seen more claims and counter-claims than a hard-working PPI company, but the only relevant conclusions are these: 1) He joined Chelsea, and 2) Louis van Gaal is still left wanting. The identity of the club’s top transfer targets depend entirely on who you believe.

To suggest that Van Gaal has ten days to save Manchester United’s season is hugely hyperbolic after three victories in three matches, but it is clear that the Dutchman still has areas of his squad that he wishes to strengthen. The clock is ticking.

What Van Gaal now needs is a show of strength from his team, a statement to remind supporters that this is a squad which finished fourth last season and is much-improved; new right-back, two new central midfielders, new wide forward, remember.

In that regard, Newcastle might be the perfect opponents. Steve McClaren is still assembling his own side, and their defensive unease from last season remains in spades. After consecutive 1-0 league wins, a humping of prospective mid-table opposition would go far in erasing the concerns from those left frustrated by United’s inaction in the market.

Ronald Koeman
Thursday night commitments (and disappointment), an injury list comprising of Jordy Clasie, Florian Gardos, Ryan Bertrand and Fraser Forster and the now customary interest in senior players. Midweek rumours of Sadio Mane and Victor Wanyama leaving the club may come to nought, but the aforementioned all combine to disrupt preparation for a trip to Watford.

Koeman’s selection of strong team on Thursdays has led to a sluggish start domestically. I admire teams that give preference to European commitments, but not all Southampton fans will.

Reputations are forged in adversity, and Koeman will be aware that avoiding defeat this weekend is a necessity. Take two points from matches against Newcastle, Everton and Watford, and people will start whispering “second season syndrome” under their breath.

Bournemouth
Eddie Howe’s side played really well at Anfield on Monday, and were incredibly unfortunate, firstly to have their own goal disallowed and then to see the assistant referee stick two inadvertent fingers up to the new offside laws.

However, Lady Luck takes no prisoners. Still pointless, Bournemouth travel to West Ham this weekend. No promoted team wants to stay on the bagel for weeks on end.

Chelsea
The arrival of Pedro will help to lift the ‘crisis’ Chelsea find themselves in, but no painkiller acts quicker than three points. Time to get back to what they did best last season.

Harry Kane
His manager says he is fatigued, but his club need him to hit his straps on an ASAP basis. Something just doesn’t compute when Kane is the only striker.

Ceding a two-goal lead to Stoke has made for a grim start to Spurs’ season. Fans are used to being downtrodden, but not normally by the end of August. A trip to surprise package Leicester now looks like the most unpleasant of banana skins.

For Kane, Saturday represents a trip back to his final temporary home before this magical rise began. Getting off and running for the season (and leading his side to victory in the process) would relieve some of the pessimism building up in north London. Whisper it quietly, but Kane has two goals in his last 14 matches for club and country.

Dick Advocaat
“I cannot go on this way, it’s quite simple,” said a gloomy Advocaat after Sunderland conceded their fifth, sixth and seventh goals of the season in just their second league game. “I have to find a solution for this team. If we keep playing this way, we have no chance at all and I don’t want that.”

Sunderland’s first task this weekend: Not make their manager want to quit his job in August. After the persuasion he took to retake his position, you wouldn’t be surprised

Sunderland’s back four
“I didn’t want to change the backline already after one game,” Dick Advocaat said this week. “But at the moment, there are players playing who I can’t understand why they are playing that way. I cannot understand it, honestly but there must be a reason.”

Forgive me for being unconvinced as to how bringing John O’Shea back into the team will change that, but something has to give.