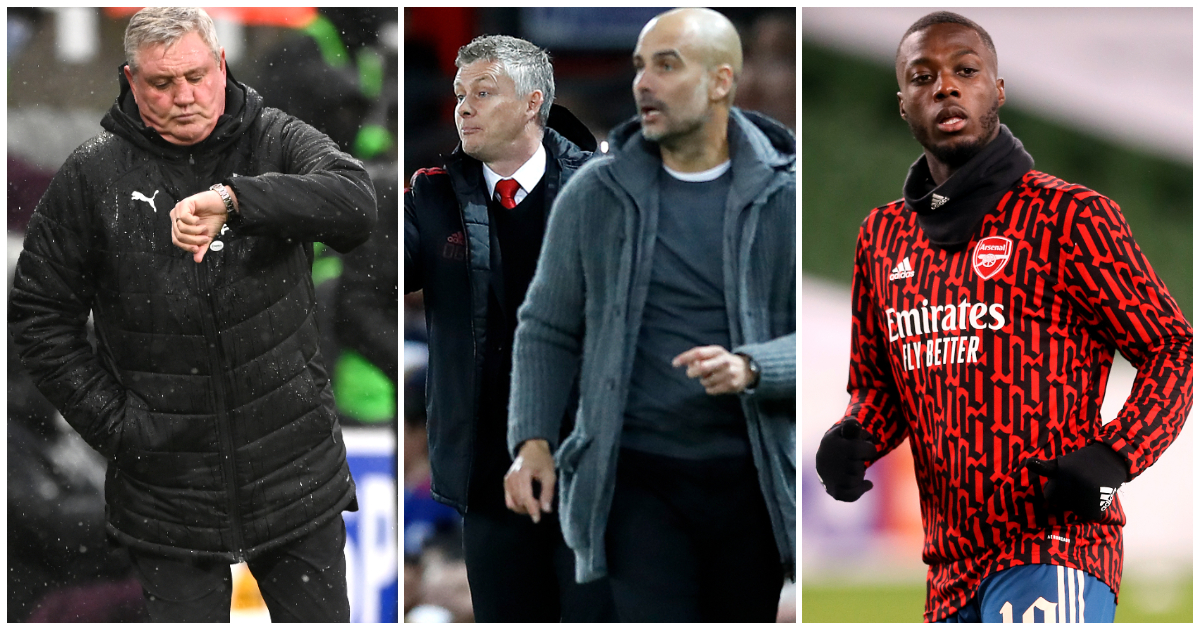 Game to watch: Manchester City v Manchester United
One thing we know for certain: this Manchester derby will be better than the last one.

The 0-0 draw at Old Trafford in December was a waste of a Saturday evening. Both managers had been somewhat spooked – Pep Guardiola by a start which had left his side outside the top four and flailing, while Ole Gunnar Solskjaer had not long since unfurled himself from the foetal position after what Tottenham did to him back in October. Never again.

United and City could just have shaken on a draw before kick-off and saved us all 90 excruciating minutes, but the Blues have since put their insecurities behind them. Spectacularly.

Having being held by West Brom a few days after the derby, City have won every game since – 21 in total. They are unbeaten in 28 after being Mourinho-ed at Spurs in November. And their revival has been achieved in the absence of their best player.

United have still got the willies when it comes to facing their major rivals. They go to the Etihad just a day short of a year since they last scored a goal in open play against a big six rival – and that was an added-time freak when Scott McTominay floated a finish over a desperate and stranded Ederson at Old Trafford.

Last weekend’s goalless stalemate at Chelsea was further evidence of Solskjaer’s enhanced pragmatism in these fixtures. His gameplan against the Big Six is simple: protect the clean sheet and take a point unless Bruno Fernandes can conjure something ridiculous once more. That seemed to be the plan at Palace too.

But Fernandes, understandably, is struggling in these games too. In his last five games against Big Six sides, United’s talisman has created only six chances while opponents force him deeper to find space.

It’s absurd to think that Solskjaer will change in the space of a week, especially when City are perhaps the one side against whom these tactics have had some success in the past. But only if Guardiola doesn’t change, and City’s current form means he shouldn’t have to.

Team to watch: Newcastle
Big Sam will be salivating like a p***head at a curry house at the prospect of his former side arriving at The Hawthorns on Sunday lunchtime.

Newcastle, one place above the drop zone, go to 19th-placed West Brom nine points clear of the Baggies. That gap could be cut to six points or extended to 12, which should settle some twitchy backsides on Tyneside.

If Steve Bruce is to achieve the latter of those outcomes, he must mastermind victory without his front three. Callum Wilson was already crocked before both Miguel Almiron and Allan Saint-Maximin picked up knee and groin injuries respectively in the draw with Wolves last weekend.

That trio has been responsible for 60 per cent of Newcastle’s goals this season. Bruce appears to be doing his darnedest to avoid relying on Joelinton, with Andy Carroll, Ryan Fraser and Dwight Gayle tipped to come in, but optimism is already desperately short to come by on Tyneside.

Especially in the wake of reports of a training ground dust-up between Bruce and Matt Ritchie this week. It seems most of the Newcastle squad is as p*ssed off as the supporters with the manager. How they react at The Hawthorns will be pivotal, not just to Bruce’s immediate future, because defeat to Big Sam on Sunday will leave Newcastle firmly in the brown stuff.

Player to watch: Nicolas Pepe
We know what happens here. We give Arsenal and Pepe the big build up having watched them seemingly turn a corner, only for them to go to Burnley and disappear up their own backsides again.

The application of consistency is certainly on Mikel Arteta’s to-do list, but the Gunners boss has had plenty to wade through before he can worry about that. Getting the occasional tune out of his band at one point seemed beyond Arteta, but right now, as they sit in the top half of the table for only the second matchday of the last 20, tangible progress appears to be coming.

Having finally nailed down a system, a style of play, and the players best able to implement both, Arteta is starting also to see evidence of a backbone running through a previously spineless squad.

Pepe was certainly one of the more delicate of Arteta’s charges, but the record signing seems to have got his sh*t together since the red card at Leeds: the defining moment in his underwhelming Arsenal career to that point.

Pleasingly for Arteta, Pepe has responded positively – to that and the emergence of genuine competition for places in the Arsenal attack. The Ivorian has scored four goals in his last seven Premier League starts, the last of which crowned an exceptional performance at Leicester in a side without the rested Bukayo Saka and Pierre-Emerick Aubameyang.

Pepe and Arsenal face a completely different assignment on Saturday when they go to Turf Moor, one which will doubtless test again the new-found resilience displayed to fight back in the Europa League last week and recover to triumph at Leicester.

Another false dawn, for Pepe or Arsenal, won’t wash at the start of a huge month which sees them face Tottenham, West Ham and Liverpool as well as Olympiakos in the Europa League.

Manager to watch: Graham Potter
Will Brighton ever score again?

Graham Potter is an overtly positive sort but even his optimism must have been stretched this week in the wake of their appalling/hilarious profligacy.

In their last three games, Brighton have attempted 63 shots, hit the target with 20 of them yet they have mustered only one goal. Last week’s farce, when they were denied a perfectly good goal by a refereeing catastrof*** in between missing a pair of penalties, must represent rock bottom.

Ahead of hosting Leicester on Saturday night, we can only assume Potter has had Brighton spending this week exclusively practising their finishing – what else can the manager do? He has done his bit by plotting a system of play which creates chances at will while retaining a generally solid foundation.

The time is now for his players to hold up their end of the bargain.

Football League game to watch: Watford v Nottingham Forest
For the Championship pervs among us, Sky Sports have a double header on Saturday afternoon, with Swansea facing Boro at 3pm. But before that comes the Glenn Murray derby.

Forest need Murray to rediscover his killer instinct and prove a point to the club where he spent a miserable first half of the season. Because one failing Chris Hughton is struggling to address is Forest’s inability to take their chances. It cost them in a 1-0 home defeat to Luton in midweek and the trip to Watford marks the start of a run of five fixtures against teams in the top six.

The Hornets enhanced their standing in that group by beating Wycombe on Wednesday night to pull level on points with second-placed Brentford. They have had to sign free agent Carlos Sanchez for the rest of the season to address a midfield shortage, which Man Utd loanee James Garner, now at Forest after ending early his stay at Watford, will be gasping to thrive back at Vicarage Road.

Robert Lewandowski’s Bayern undoubtedly have the upper hand over Erling Haaland’s Dortmund, with the leaders in search of a fifth straight Klassiker triumph. The hosts have a 13-point advantage over last season’s runners-up but Dortmund could still strike a blow in the race for the Bundesliga – just for the benefit of RB Leipzig, who currently trail Bayern by a couple of points.

And Bayern are hardly impenetrable. Manuel Neuer hasn’t kept a clean sheet in four games since returning from the FIFA Club World Cup, in which time Bayern have won, drawn and lost their three Bundesliga games. Bayern have strengthened their defence ahead of next season and reports suggest they want to pair Dayot Upamecano with Kalidou Koulibaly, which ought to do the trick. But more immediately, Hansi Flick may have to rely on Lewandowki, Thomas Muller, Leroy Sane and co. to outscore Haaland and Jadon Sancho on Saturday.