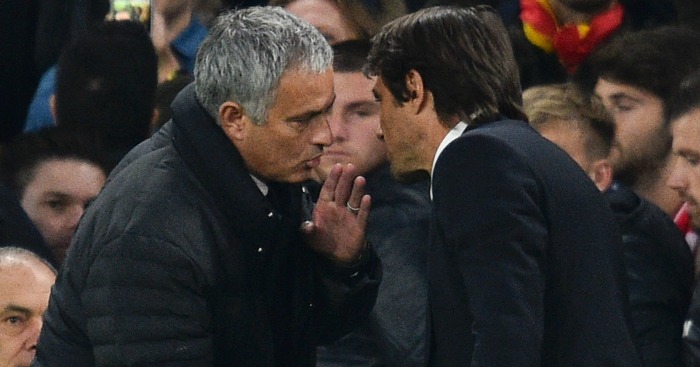 Game to watch – Chelsea v Man Utd
Something will die on Monday night: either Chelsea’s dream of doing the Double, or United’s hopes of the Mickey Mouse Treble.

It looked like a bit of Jose Mourinho died on his last trip to Stamford Bridge. The former Chelsea boss was humiliated on his old stomping ground. The Blues steamrollered over his men, winning 4-0 while their incredible run was just starting to gather momentum. The Portuguese was particularly irked by Antonio Conte giving it large to the crowd late on, but he’s not one to hold a grudge. Oh, hang on…

Mourinho wants revenge. And he is used to getting it. But Conte is hardly a man to back away from a challenge. The Chelsea boss will be fielding his strongest team, which Mourinho will be desperate to do too, but with the second leg against Rostov coming only three days later, the United manager may have to compromise.

United went to the Bridge in October to attack and they got battered. So expect a more pragmatic approach from the Red Devils. Chelsea will be Chelsea.

Player to watch – Marcus Rashford
The United youngster spoke earlier this season of his desire to become the “ultimate centre-forward”. Zlatan Ibrahimovic’s indefatigability and United’s reliance on their top scorer has seen Rashford relegated to the role of stand-in striker or winger. But an elbow-related suspension offers the academy graduate the opportunity to show Mourinho what he can do in his favoured role – and remind Gareth Southgate of his striking talent.

Rashford has three goals in his two FA Cup starts as a central striker, though in neither of those ties did he face a defence anything near as stingy as Chelsea’s. The 19-year-old has proven he can run the centre-halves of Reading and Blackburn ragged but David Luiz, Gary Cahill and Cesar Azpilicueta offer a far more imposing audition.

Whatever Rashford does while Ibrahimovic serves his domestic ban, Mourinho will reinstate the veteran to his starting line-up. But with reports suggesting the Swede’s stay could be a one-year sojourn after all, the trip to Chelsea represents the first of very few opportunities Rashford will get to prove himself through the middle.

Team to watch – Liverpool
The most predictable result this weekend could be Liverpool 1 Burnley 1. It seems just as predictable as it was that the Reds would brush Arsenal aside last week after their surrender at Leicester.

The top sides haven’t caused too many problems for Jurgen Klopp but against the bottom dwellers, it’s a different story. They have lost five games this season, with Burnley among the Premier League strugglers to have turned over Klopp’s men. Bournemouth, Hull, Swansea and Leicester were their other conquerors, none higher than 12th in the table.

Liverpool’s players, including Sadio Mane, seem to have been queuing up this week to discuss their baffling lack of consistency and Sunday’s Anfield clash offers them the opportunity to answer a few critics. If they are to do that, Klopp has to come up with a plan to combat the one of the division’s most defensive teams.

Sean Dyche and Burnley will turn up on Sunday looking to do to Liverpool what they did to Chelsea last month. The Clarets held the runaway league leaders to a draw, stifling them with a back six, while the four in front boxed in the creative talents. Chelsea failed to muster a single shot on target in the second half, and Dyche will believe they can do the same to Liverpool. He has every right to.

Klopp has very few viable alternatives with personnel, so Plan B – if they have considered one – has to come in the form of a tactical switch if Liverpool struggle again to crack Burnley.

Manager to watch – Aitor Karanka (Middlesbrough)
Many Boro fans feel Karanka is fortunate to be in the position of preparing the team for their FA Cup quarter-final against Manchester City this weekend. Last week’s defeat at Stoke and the manner of their surrender convinced many supporters the Spaniard’s time was up.

Boro haven’t won in the Premier League since Christmas, a run that stretches to ten games, while the distinct lack of spirit displayed in the most recent defeats at Palace and Stoke is almost as alarming as their slide into the bottom three.

The FA Cup has been Boro’s only salvation in 2017 – though given the opposition they have faced, it really had to have been. Sheffield Wednesday, Accrington Stanley and Oxford have been dispatched and though the draw handed them another home tie, the challenge of Manchester City will be far greater than any they have faced so far in the competition.

The visit of City will give Steve Gibson and the board the opportunity to assess whether the players, and fans to a lesser extent, are behind Karanka. Ben Gibson suggested last week at Stoke that not everyone was pulling their weight. If that is again the case, with a trip to Wembley on the line, then it will be a damning indictment not only on the slackers but also on the manager.

Gibson is not daft. He won’t act hastily but he won’t hesitate too long to swing the axe if he believes the manager is hampering Boro’s hopes of survival. The prospect of Wembley would go a long way to securing Karanka’s job in the short term, especially with Manchester United due at The Riverside before a two-week international break that precedes a six-day period in which Boro face Swansea, Hull and Burnley.

One-on-one battle to watch – Joey Barton v Adam Lallana
Barton expected to have his feet up this weekend but the postponement of his FA disciplinary hearing has given the Burnley midfielder perhaps one last chance to play against Liverpool – the side he feels he should have played for.

The 34-year-old will be relishing this unexpected opportunity to get in the face of Liverpool’s flair, with Lallana likely to be the Reds midfielder Barton wants to irritate most. He was in splendid form during the win over Arsenal last week and with Burnley likely to sit deep, Lallana will be expected to be at his inventive best.

The contrast between styles is stark, but that’s the way Barton likes it. Until such a point that he doesn’t. Playing with the freedom of having little to lose, he could be a dangerous opponent for Lallana in more ways than one.

Still, it’s some decent Friday night fare. After handing Newcastle victory in their top-of-the-table clash ten days ago, things worsened for Chris Hughton’s men when they were comfortably beaten by Nottingham Forest. Brighton looked to be bottling it.

But a trip to the Championship’s whipping boys, Rotherham, arrived at just the right time. Not only did they arrest their slump and pick up three points, they gained two on Newcastle in the race for the title and kept third-placed Huddersfield at a safe, six-point distance.

Derby have been typically Derby in 2017. The now traditional New Year hangover has resulted in just one win in their last ten, derailing what slim play-off hopes they may have had after a promising start to life under Steve McClaren. ‘Twas ever thus.

European game to watch – Juventus v AC Milan
There may only be one EFL game available to watch this weekend but there is no shortage of European action.

See how shellshocked PSG remain after their surrender at Barcelona this week when the Ligue Un title chasers travel to bottom-placed Lorient on Sunday night. Or check out what kind of shape Gerard Pique and his teammates are in after the party he said they were going to enjoy following Wednesday night’s historic triumph.

I’ll be watching the new Buffon versus the old one on Friday night. Gianluigi Donnarumma will need to be in good form as European chasers AC Milan head to Juventus, who are chugging along nicely, eight points clear at the top of the Serie A table. This will be the fourth time the two sides have met this season, with Juve looking to exact revenge for Serie A and Supercoppa Italiana defeats. Gianluigi Buffon, should he be required to, will also fancy showing the young pretender Donnarumma that the king is not yet dead.

Where is Mike Dean this week?
The Dean is in Teesside this week, not only looking after Middlesbrough v Manchester City, but also babysitting Kevin Friend.

Friend, if some reports last week were to be believed, turned up to ref Manchester United’s draw with Bournemouth with a raging hangover while still sporting his spew-covered stag do t-shirt from Antony Taylor’s pre-nuptial lads’ trip to Marbella a week prior. Unfortunately for Friend, Zlatan and Tyrone Mings took no pity on the official, but they did take a pretty intense dislike to one another, making the referee’s headache far worse than the beer and jaegerbombs ever could.

As punishment, Friend is being sent to The Riverside to sit on the sidelines and think about what he did, while also taking the opportunity to learn from the master. Mike Dean: referee, mentor, legend.