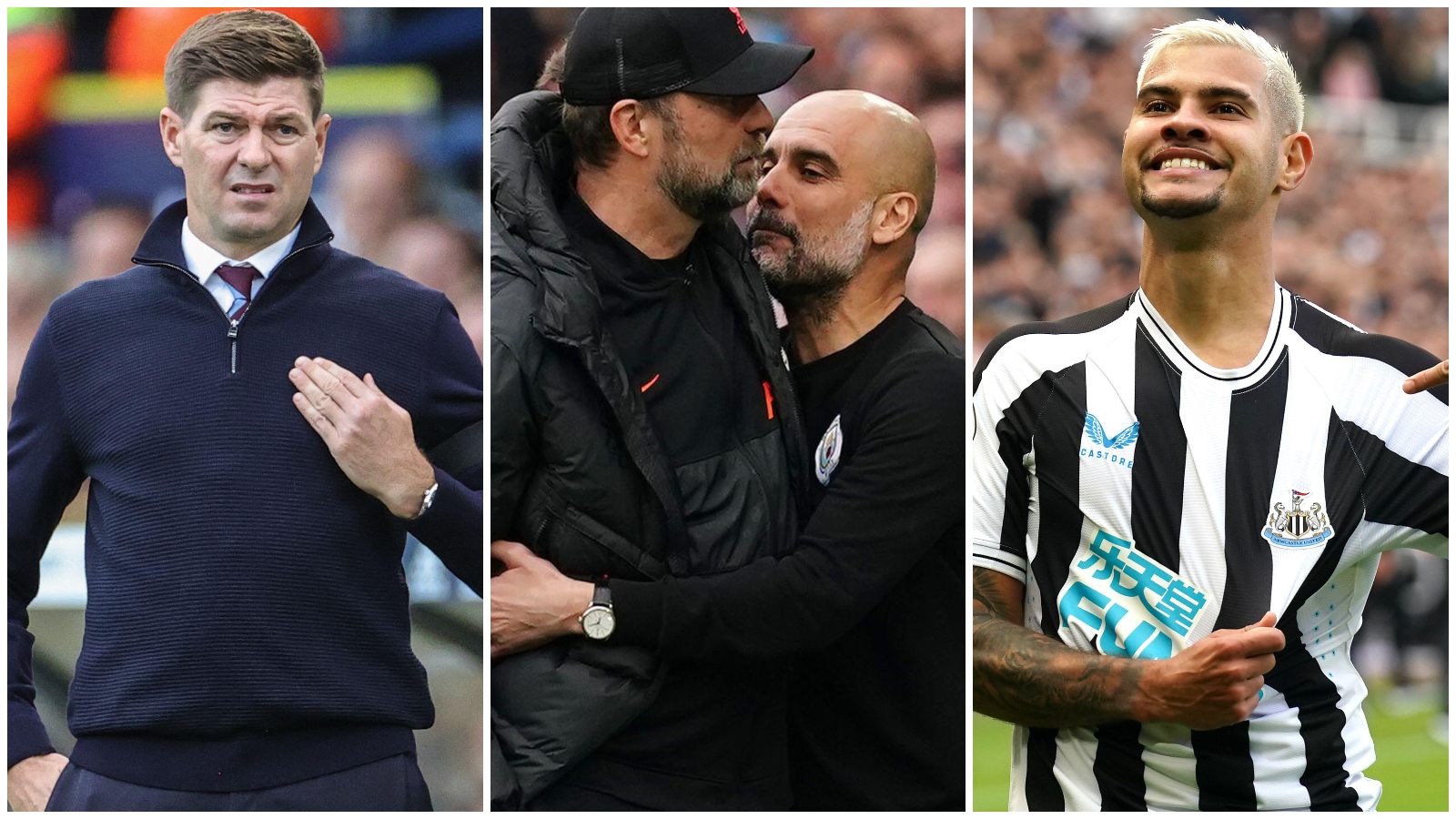 Liverpool versus City; Steven Gerrard facing Chelsea with his job on the line; battle of the Brunos at Old Trafford; Arsenal at Leeds; El Clasico; Le Classique… ooh, you big dirty b*stard.

Liverpool fans are hardly buoyant before they take on the champions but at least they are more optimistic after tw*tting Rangers all over Ibrox on Wednesday night. Klopp certainly is.

“It changed the mood completely,” said the Reds boss after a 7-1 win that serves as a badly-needed, perfectly-timed shot in the arm before Erling Haaland and his mates show up at Anfield. “We all know who we are welcoming on Sunday… but it’s better to go into it with this feeling we’ve got now than any other.”

Of course, thrashing the second-best team in Glasgow means very little when preparing to face arguably the best team in Europe; Klopp isn’t kidding himself. But for a team that relies as much on spirit and belief as Liverpool do, it was absolutely vital to rise out of the funk that the Reds have wallowed in for most of the season prior to going north of the border.

City might still give them a paddling. We wrote prior to the Manchester derby how United were going to face their neighbours with a new-found optimism, and City promptly pulled their pants down. Similar could happen to Liverpool.

But for all their problems, few would doubt that the Reds still have a performance in them, even if their ferociousness has faded. They have been too relentless for too long just to slide into obscurity. And as awesome as City have been going forward, defensively, they are still vulnerable.

If Liverpool turned the page at Rangers, and they have suddenly rediscovered their mojo, the visit of City could mark the start of a new chapter for Klopp’s men, one they hoped would begin after the prolonged international break. Whether it does or it doesn’t, it’s still Liverpool v City and still one of the most-anticipated Sundays of the season.

Team to watch – Leeds United
Liverpool have 14 points to make up on Arsenal while even City are trailing Mikel Arteta’s side. This weekend, they and the rest of the Premier League are hoping for a favour from Leeds United.

It is very much hope rather than expectation on current form. Jesse Marsch’s side are in a slump, while the Gunners are flying. There is a very real, quite disconcerting possibility that Arsenal won’t implode and they are, in fact, the real deal.

Their credentials will be tested amid the baying and howling of the Elland Road crowd. The Leeds players, too, need to bring their A game. It’s been a while.

Not since beating Chelsea 3-0, when it all came together for the Yorkshiremen almost two months ago, have they shown their best side. Or even won a game of Premier League football. Defeats to Brighton, Brentford and Palace, as well as home draws with Villa and Everton, have put the spotlight back on Marsch.

A four-week break didn’t help. It was hoped it might so that Marsch and his staff could address Leeds’ attacking problems and the individual errors at the back compounding their impotence. Not so, it seems.

It isn’t that Leeds have been hopeless through their five-game winless run but they are drifting. The visit of the leaders marks the start of a huge eight days which sees the Whites also face Leicester and Fulham. The Leeds listlessness must stop now. Something, anything, from Sunday would provide a platform for two very winnable games.

Player to watch – Bruno Guimaraes
It’s already been a big week for Newcastle’s latest idol. He bagged a brace last Saturday; he was due to become a father in midweek; and on Sunday, he goes into a battle of the Brunos at Old Trafford.

No wonder the Brazilian says he is experiencing “the best days of his life” right now. He is the focal point, the match-winner, in a Newcastle side that has rediscovered its spark upon the January signing’s return from injury.

The Magpies go to Old Trafford with no reason to fear their hosts. On Tyneside, under their new-ish ownership and only a point and a place behind the Red Devils, amid the myriad issues for Erik ten Hag, this is being seen as a meeting of equals. In Guimaraes, the Toon Army reckon they have the difference-maker.

Though the two Brunos’ paths will cross, they won’t be in direct competition with one another. Newcastle’s will doubtless come across Casemiro more often than any other Red Devils and that one-on-one battle between compatriots ought to be the most fascinating in a game of intriguing match-ups. On the line for both sides: a place in the top four, if Villa can help them out…

Manager to watch – Steven Gerrard
Villa have to help themselves before they worry about anyone else. Gerrard’s job probably depends on it.

The Villans sit in 16th place, three points above the bottom three, and no-one it seems is impressed with Gerrard’s leadership other than Christian Purslow. While it obviously helps the ex-Liverpool midfielder to have friends in high places, those even higher are justifiably p*ssed off with the return from a sizeable investment in the transfer market.

Owners Naseef Sawiris and Wes Edens also heard the dissent from the visiting fans after a dire draw at Forest last Monday. The Holte End’s reaction to whatever transpires against Chelsea on Sunday could be key.

Can Gerrard lift the mood? The atmosphere ahead of the Blues’ visit is dark and one of the criticisms aimed at the manager a month short of a one-year anniversary that he might not see concerns his dour demeanour and how that sets a negative tone. Then there is the fact he hasn’t yet settled on a side or system to get a tune out of an undoubtedly talented squad.

None of the metrics really paint Gerrard’s tenure in a positive light. When Dean Smith was sacked, Villa were 16th with 10 points from 11 games. Here they are, anchored in the same spot, with nine points from nine games. Gerrard desperately needs a result, and a performance, to point towards some progress, however negligible.

EFL game to watch – Watford v Norwich
Slaven Bilic’s honeymoon as Watford boss lasted for the entirety of a single Sunday afternoon in Stoke. Since his first game, a resounding 4-0 win, the Hornets have reverted to the form that saw Rob Edwards head for the revolving door still spinning from his entrance.

Defeats to Swansea and Blackpool have followed that opening win, leaving Watford in 14th place with just four victories from 13 games.

Norwich are hardly in flying form, with the Canaries having won one in their last four. Yet they remain level on points with leaders Sheffield United, such is the batsh*t nature of the second tier.

For the Championship junkies among us, this Saturday night offering is one of four games being screened this weekend. On Saturday lunchtime, Luton versus QPR and Rotherham against Huddersfield vie with Leicester and Palace for your attention, while on Sunday, managerless Hull host Birmingham.

European game to watch – Real Madrid v Barcelona
Barca might be a financial basket case and their Champions League prospects are dangling by a thread, but they go into the first Clasico of the season in top spot in La Liga. Whether they can stay there come Sunday evening very much depends on whether they can fathom how to perform under pressure.

Barca have conceded only one goal in La Liga but their defence has been a disaster in the Champions League, while Xavi’s midfield has failed to adequately support Robert Lewandowski, who is doing all he can to carry the Catalans on his back. Against Inter, under the spotlight, Barca buckled. How will they fare in the glare of a Clasico against a Real side renowned for getting the job done?

Annoyingly, the Bernabeu battle clashes in part with Liverpool against City, the Clasico kicking off at 3:15pm on Sunday. At least in France, the Classique commands sole focus on Sunday night when Kylian Mbappe faces the PSG fans for the first time since the latest doubts over his future emerged, with Marseille keen to bridge a three-point gap between themselves and the leaders.