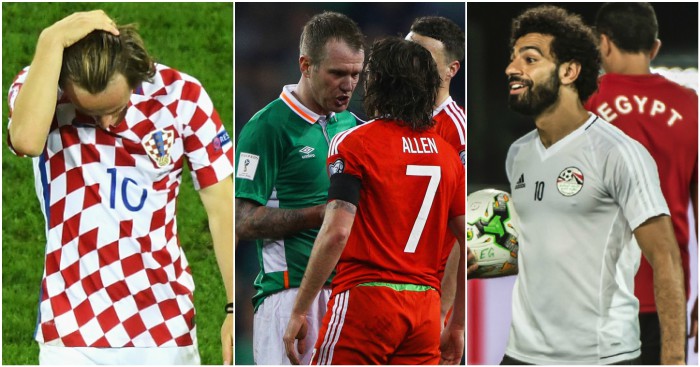 Game to watch – Wales v Republic of Ireland
Roy Keane was typically disdainful in dismissing the idea that an injury to Gareth Bale had created a “buzz” around the Republic of Ireland squad. “This idea that we were going around knocking on each other’s doors and hugging each other! Jaysus…” he said with added incredulity in midweek.

“I think Wales got results before without Bale,” said the Ireland assistant manager, who had clearly done his research. Wales have indeed “got results” before without their best player; their last victory without Bale prior to Friday’s 1-0 triumph in Georgia in the side came against Macedonia in October 2013.

Bale’s absence might not create a “buzz” in the Ireland squad, but it would be foolish to suggest it is not a boost. Almost four years to the day of that Macedonia win, Chris Coleman must formulate a plan to succeed again without his talisman.

Ahead of the meeting at the Cardiff City Stadium on Monday evening, the task facing both is now clear.

Wales need only a point to guarantee second spot, and could top the group following Serbia’s defeat to Austria. Serbia will secure top spot if they beat Georgia, but anything less than three points will leave the door open for Wales.

Republic of Ireland could also finish top but they need a massive favour from Georgia as well as a victory in Cardiff. A win will be enough for second place, at least.

Wales and Ireland would be the first to collectively admit they have not particularly impressed in qualifying, but both would justifiably feel aggrieved not to reach the finals. Wales are unbeaten in qualifying and Ireland have lost only once, yet their struggles have been evident since shining at Euro 2016.

Keane correctly identified that while Wales will feel Bale’s absence, Ireland are dealing with injuries of their own. Seamus Coleman and Jon Walters cannot combine to even match Bale’s talent, but their importance to the Irish cause is undoubted. Captain and vice captain are eminently difficult to replace.

But one of Ireland and Wales must find a way in the face of adversity. Four of the last six fixtures between The Dragons and The Boys in Green have ended in a draw. Such a result would be enough for the hosts but Coleman says they will play for the win. To the victor go the spoils.

Mohamed Salah and Mohamed Elneny are no longer “the young ones”. Mohamed Aboutrika and Wael Gomaa have both retired. Bob Bradley, speaking in March 2013, has had four jobs in management since leaving his post as Egypt head coach after failure to qualify for the 2014 World Cup.

Much has changed, but much stays the same. Egypt are the most successful country in Africa Cup of Nations history, but have scarcely had the opportunity to cut their teeth on the world stage.

The Pharaohs have reached the World Cup finals only twice – the latest instance came in 1990. They have won four Africa Cup of Nations titles in the intervening 27 years, but their 1-0 defeat to England courtesy of a second-half Mark Wright goal on a warm June evening in Cagliari remains their last match at a World Cup.

The wait is almost over. With just two games left in qualifying, Egypt top their group, boasting a two-point gap over Uganda. Sunday’s opponents, Congo, are already eliminated, and Egypt have not lost a competitive home fixture since November 2014. Three points would almost confirm a place in Russia.

From one of “the young ones” four years ago, Salah is now his country’s talisman. Only one player has scored more goals in all of African qualifying, and the 25-year-old has six goals, two assists and four awards in 11 games for Liverpool this season. If the mountain of World Cup qualification will not come to Mohamed…

Team to watch – England
At the very least, it cannot get much worse.

There is no sugar-coating the bitter pill that was England’s 1-0 victory over Slovenia on Thursday. The Three Lions did not roar to guaranteed qualification as planned; they limped over the finish line in front of a half-full Wembley with a stoppage-time winner over the nation ranked 55thin the owlr.

One can only hope it has a positive effect on the squad, that it has lifted a considerable weight from their shoulders ahead of Sunday’s trip to Lithuania. Gareth Southgate will be able to don his lab coat and goggles and experiment with his side in Vilnius, handing fringe players a chance to impress, resting those who failed to take said opportunity on Thursday at Wembley.

An England team shorn of the usual faces would give fresh impetus to Jack Butland or Jordan Pickford, Kieran Trippier, Michael Keane, Chris Smalling, Jesse Lingard, Harry Winks and Daniel Sturridge. The least we can ask is to be massively disappointed and underwhelmed in a few new players.

Manager to watch – Dick Advocaat
Dick Advocaat will keep one eye fixed on Monday’s meeting with Sweden, but it would be a grave error to ignore the matter at hand. The Netherlands travel to Belarus on Saturday, and if they do not at least match Sweden’s result at home to Luxembourg, qualification will be impossible.

Three points behind Sweden in Group A with two games remaining, and with an inferior goal difference to their closest rivals, one would suggest that the Netherlands already face a thankless task. As impressive as the 3-1 victory over Bulgaria was in September, there is a sense that it was delaying the inevitable: failure to qualify for a second successive major tournament.

It seems an unfathomable position of adversity for the Dutch, who came within an Andres Iniesta extra-time goal of being crowned unlikely world champions in 2010, and were only beaten on penalties by Argentina in the semi-finals of the 2014 tournament in Brazil. Current manager Advocaat is the third man to fill the post after Louis van Gaal exited with a third-place finish in Brazil, the future of the country in seemingly safe hands.

Yet Arjen Robben (33) remains their star player, Wesley Sneijder (33) is still prominent, Robin van Persie (34) and Klaas-Jan Huntelaar (34) were called up last month, and Ryan Babel (30) is set to make his first international appearance since November 2011. The exuberance of youth is nowhere to be seen as an ageing Dutch manager leads an ageing Dutch squad into one final battle. There may be life in the old dog yet, but the Oranje are likely to be pipped to qualification.

Ronaldo has scored a European-best 14 goals in qualifying and Portugal have won seven of their eight games thus far, yet still sit second in their group. Their only defeat came in their first game – the only one Ronaldo has missed – against group leaders Switzerland.

A visit to Andorra is arguably little more than a fixture designed for the Real Madrid forward to extend his goalscoring exploits. He scored four against them in a 6-0 win on October 7 last year and will hope to repeat the feat exactly 365 days later.

The home game against Switzerland on Monday will take on far more importance, the victor automatically reaching Russia while the defeated faces the prospect of a two-legged play-off. But this should still be an awful lot of fun – and perhaps Lima can extend his own scoring record.

It’s all going off in the Croatia camp. Even Luka Modric, who seems like such a nice boy, lost his cool following the concession of a last-minute equaliser and two points to Finland on Friday night.

“That Croatia was waiting for the final whistle against that kind of national team is… it is unbelievable that we are struggling against teams like Kosovo and Finland, where before we would have beaten them with ease.”

“What do we do now? We started with him and now we have to just keep going.” Modric said, referring to the coach Ante Cacic.

Except they don’t. Cacic was sacked on Saturday morning and replaced by Zlatko Dalic.

“The situation is catastrophic,” continued Modric. “But we still have a chance to make it right.”

That opportunity comes in the form of a trip to Ukraine on Monday night. The two sides are locked together on 17 points, two points behind Group I leaders Iceland, who face rock-bottom Kosovo. So Ukraine and Croatia appear to be preparing for a shootout for second place and a place in the play-offs.

Football League game to watch – Scunthorpe v Wigan
A disclaimer is needed: the Football League match to watch is Scuntorpe v Wigan, but only provided you can appreciate the beauty of two teams who have mastered the defensive side of the game.

Manchester City and Manchester United will be justifiably proud with the state of their ‘Goals Against’ column this season, both clubs conceding just two goals in their opening seven Premier League games. But for longevity, a staunch defensive record achieved over a longer period of time, one has to look to League One.

Eleven games into this campaign, and second-placed Wigan have conceded six goals; Scunthorpe are one place below the play-offs, but they can go one better, letting in just five. Alongside Coventry, no club in the Premier or Football League has kept more clean sheets than either side this season (7). The contractual obligation is surely to describe this as an intriguing game of chess, such is the finely-balanced nature of this meeting.

Everyone else lumping their mortgage on a 5-5 draw? Good to hear.