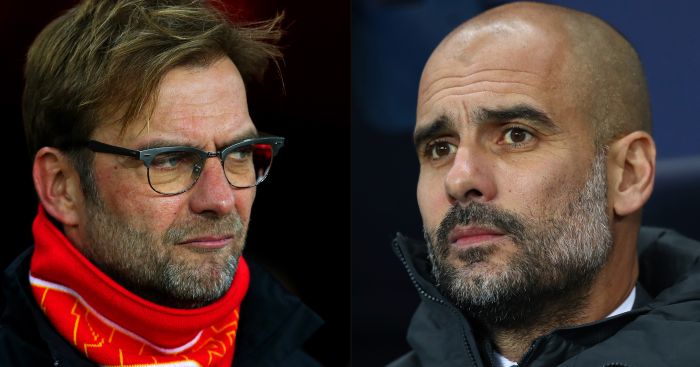 Game to watch – Manchester City vs Liverpool
Had you offered Jurgen Klopp three points from this tough Premier League double header either side of the international break, he might well have taken it. Had you offered him four points, he would have snapped your hand off before asking why you suddenly had the power to give out wishes like some sort of football genie.

With that in mind, you might expect Klopp to play safe against Manchester City’s fluid and dangerous attack. Yet therein lies the beauty of Saturday lunchtime’s game. Neither side could defend properly last season, undermined by their own defensive incompetence, and yet both managers spent the summer adding to their attacking armoury and failing to buy central midfielders or central defenders.

So rather than a cagey contest, we’re far more likely to have a version of football-basketball between the top six’s two most top-heavy teams, where both sides take it in turns to invite the other on before counter-attacking at speed. If that doesn’t sound sexy to you, we can’t be friends.

Player to watch – Alexis Sanchez
Whether Ivan Gazidis and Arsene Wenger believe that Arsenal supporters are stupid, ludicrously optimistic or both isn’t quite clear, but there was plenty to enjoy in their joint claims that Arsenal keeping hold of Sanchez was a statement of intent. Having refused to persuade him to sign a new contract, accepted that he wants to leave and then welcomed a bid, I’m struggling to see any statement that isn’t ‘please believe our weak PR guff and keep buying season tickets’.

If Wenger’s first season of his new two-year contract isn’t going to be a video of a bin fire played on constant loop, he really could do with Sanchez continuing last season’s exploits. It has been enjoyable to watch the PR wheels spin and paint the Chilean in a poor light ever since it became clear that he wanted to leave. A reminder that Sanchez scored or assisted 47% of Arsenal’s league goals, had 24% of their shots on target and created 18% of their chances last season.

The party line is that Sanchez is a streetfighter and therefore likely to muck in and continue to give his all, but that is an assumption based more on hope than logic. It only takes a player’s focus to drop by five per cent for the difference in his output to become obvious. Sanchez can negotiate a free transfer from January and City may well come in again for him then. That decision will surely not be based on Sanchez’s form over the next four months.

Sanchez has spent much of this week reacting to stinging criticism; it is clear that all is not well in his world. One response would be to come out fighting harder than ever, disproving his critics. Another would be to sulk, demotivated after his failed move to Manchester. Wenger better cross his fingers for the former, or Arsenal truly are in trouble.

Team to watch – Swansea City
Cynics might accuse me of picking Swansea because they play on Sunday, a day when I am working on such tasty morsels as Paul Clement’s side vs Newcastle and Burnley vs Crystal Palace. This is a result of Sky Sports’ initiative to televise from every Premier League ground in the first three months of the season. From Sunday onwards, the next five live games showcase Burnley, Palace (twice), Swansea, Newcastle, West Ham, Huddersfield, Bournemouth, Brighton and Southampton. You can’t moan about big club bias now.

Despite the catcalls of derision at Sunday’s televised fare (Everton vs Tottenham and Leicester City vs Chelsea are just two games overlooked for coverage), there is something truly intriguing about watching Swansea for the first time this season. While some bottom-half managers have struggled to attract players this summer, Paul Clement has signed almost an entirely new front six. He could feasibly start Sunday’s game with Roque Mesa, Sam Clucas, Renato Sanches, Tammy Abraham and Wilfried Bony in the starting line-up.

We are all expected to frown upon the transfer window as a gauche exemplification of our capitalist consumer culture, but there’s nothing quite like the anticipation of watching a side when you have no idea of how they will set up, who they will play and how they will gel. Swansea might have lost their two best players, but they could still be ruddy good fun.

Manager to watch – Frank de Boer
I wrote plenty here about Crystal Palace’s futile quest for long-termism, but it bears repetition. If Palace lose at Burnley this weekend, all the signs point to De Boer being sacked and becoming the unwanted holder of the third shortest managerial reign in Premier League history. After his hasty sacking at Inter, a coaching career would be in the doldrums. Palace would be searching for a ninth permanent manager in seven years.

One-on-one battle to watch – Gylfi Sigurdsson vs Mousa Dembele
Not too long ago, you might have called this the battle between the Premier League’s two most underrated performers. Now Sigurdsson has moved to Everton for £45m and suddenly must fight to prove himself all over again.

Against Chelsea, Sigurdsson operated on the left of a front three with Wayne Rooney and Sandro Ramirez, struggling to service two men stumbling and staggering around the final third. Ronald Koeman could choose to use Rooney’s extramarital dickbaggery to drop him and start Sigurdsson as a No. 10 as part of a 4-2-3-1 formation. That could make space for one or both of Dominic Calvert-Lewin and Ademola Lookman on the wing, adding the injection of pace that was desperately lacking at Stamford Bridge. But Koeman stated on Thursday that Rooney would play.

Whether Sigurdsson drifts left or plays centrally, it is likely that Mauricio Pochettino will ask Dembele to monitor his former teammate. For all the stars in this Spurs team, Pochettino has no doubt about his teacher’s pet.

“I always say, ‘Mousa, in my book, you will be one of my genius players that I have been lucky to meet,'” Pochettino said in March. “One was Maradona, then Ronaldinho, Okocha and De La Pena. He is a genius too, Moussa Dembele. We always told him, ‘If we had taken you at eighteen or nineteen years old, you would have become one of the best players in the world.’ I would have loved to have taken him on at 18.”

Exceptionally high praise indeed, but merited. Dembele is far, far more than a containing midfielder, but is Pochettino’s trusted cohort when Spurs are faced with a capable playmaker in the hole behind the striker. If Dembele gets the better of Sigurdsson on Sunday, Tottenham can get their league season back on track after the early wobble.

Football League game to watch – Derby County vs Hull City
Regular readers of this column – bless you, my child – will be aware of my frustration at the Football League coverage under the current television deal. I am aware that bums on seats rules all, but the lack of League One and League Two coverage is abject.

Between now and October 30, there are two League Two games and one League Two game live on Sky Sports. That is pitiful from a host broadcaster. Anyway, that leaves you with a choice of Sheffield Wednesday vs Nottingham Forest and Derby vs Hull, and I’m going to start even more weary sighs from my lovely editor if I pick Forest again.

Hull are this season’s party club in the Championship. Their five matches have contained 19 goals and they are managed by Leonid Slutsky, as out of place in England’s second tier as a penguin in the Grand Canyon. With Abel Hernandez ruled out for the season, responsibility has fallen on the young shoulders of 20-year-old striker Jarrod Bowen. He has four goals in 420 league minutes.

Derby have started the season in stumbling, stuttering fashion, but will want to establish themselves in the play-offs under Gary Rowett. With nothing else to do on Friday evening (don’t pretend you have lots of mates), this is one to watch.

European game to watch – Lazio vs Milan
I have held off from including Milan in this section so far this season because their two league opponents (Crotone and Cagliari) were not clubs against whom their title credentials can be judged. In Rome on Sunday afternoon, Milan are going to be truly tested.

Serie A needed a challenger to Juventus’ dominance, and Milan’s investment this summer finally offers some hope that it has found one. If the signings of Franck Kessie, Hakan Calhanoglu, Andre Silva, Lucas Biglia and Ricardo Rodriguez provided optimism, it was the arrival of Leonardo Bonucci and retaining of Gianluigi Donnarumma that truly established Milan as possible Scudetto winners.

The spanner in the works might be Vincenzo Montella. Milan’s manager has survived until now, but the suspicion is that the owners will want an elite coach to match their elite recruitment. There are plenty of doubts as to whether Montella constitutes that elite coach.

Milan have won their opening two league games, but not without a struggle. Montella’s team were pretty dreadful against Cagliari before the international break, requiring a winner from Liverpool hall-of-famer Suso with 20 minutes remaining. Fail to win in the Olimpico, and the pressure will soon mount up. Milan’s new owners are not likely to view patience as a limitless virtue.