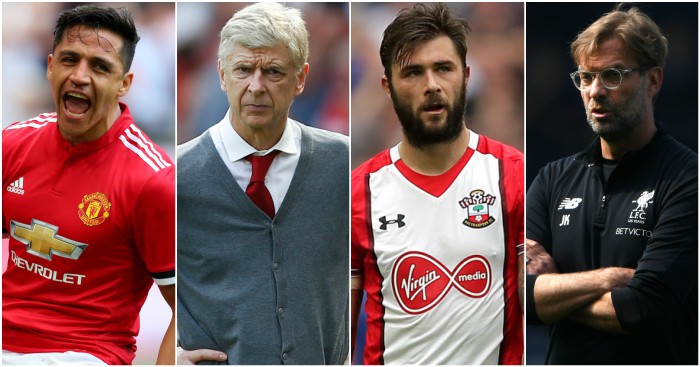 Game to watch – Liverpool v Stoke
“I am much more interested about the Stoke game in the moment than the second leg against Roma… that’s a massive game for us.”

Jurgen doth protest too much about the visit of the Potters. But, as with last week’s trip to West Brom, however inconvenient it may be, Saturday’s lunchtime kick-off still carries some significance for the Reds.

The capitulation at The Hawthorns that so infuriated Klopp leaves Liverpool looking over their shoulder for the charge of Tottenham, rather than straight ahead with Manchester United in their sights. Returning to winning ways in the Premier League this weekend would seal the Reds’ place in the Champions League again next season – the target Klopp has identified all season – while also keeping Mauricio Pochettino’s men at arm’s length. Given all else Liverpool have to play for, the difference between third and fourth may not seem all that important, but since they entered the run-in with eyes on second, fading and finishing in the final Champions League spot would be a disappointment.

Tailing off is a recurring theme with Liverpool. The withdrawal of Mo Salah has prompted two cases of Liverpool shooting themselves in the foot this week, with Klopp saying he is willing to accept the criticism for withdrawing his best player against Roma before they scored twice, because he doesn’t want the Egyptian getting injured. So, does Klopp pick Salah against Stoke?

The forward is chasing records. He needs five more goals in potentially five games to break Ian Rush’s club record of 47 goals in a season, while he requires three from three games to match the outright Premier League goalscoring record – though Alan Shearer and Andy Cole both had 42 games to notch 34 goals. Salah has said these milestones are important to him. However, Klopp has to look at the bigger picture, as he says he will do to preserve his dwindling midfield options.

Paul Lambert would be chuffed if Salah was given a breather before his return to Rome next week but Stoke would still be facing an uphill battle. The Potters go to Anfield four points off safety having played a game more than the four teams directly above them, and they are without a win since January 20. Their decade-long stay in the Premier League could end on Saturday if they take nothing from Liverpool and Swansea turn over Chelsea in their evening meeting.

Lambert, who desperately wants three wins from their remaining three games, doesn’t yet appear to have settled on his favoured selection or formation and he has to pick a side to beat Liverpool without a clear idea of how the Reds will line up. Managers despise guesswork, but the possibility that Klopp will play it safe with Roma in mind offers Lambert a straw to clutch at.

Team to watch – Southampton
Though they sit level on points with Stoke, Southampton cannot be relegated this weekend because they have played a game fewer than the Potters. But anything other than a victory against Bournemouth at home would realistically erode what little hope the Saints have of survival.

The Saints have sleepwalked into the relegation mire and it appears their unwitting journey will take them all the way to the Championship. Unless Mark Hughes can this weekend provoke his side into turning all the positives he has identified since taking over into something tangible so that the rest of us can see what he’s talking about.

One point and an FA Cup exit with a whimper is all Hughes has to show since taking over, but in the absence of anything else to grab on to, the boss will cling on to the hour during which they dominated Chelsea during his only match in charge at St Mary’s before they wilted pitifully.

Back on home soil against a side that has won only one of their last nine – against Alan Pardew’s West Brom – Hughes needs his players not only to summon up the spirit that saw them dominate the FA Cup finalists, but to maintain it. The Saints boss admitted “we are going to have to take more risks”, which is perhaps more like what the fans want to hear. It’s hardly as if being conservative was working – they conceded three goals in each of Hughes’ first three games. When they attacked Chelsea at St Mary’s, they looked a threat and the home supporters responded in kind. Only when they retreated did it begin to go terribly wrong.

Hughes emphasised the need to take something out of the trip to Leicester, their most recent Premier League outing, and though they managed a point, everyone is under no illusions that only three will do against the cruising Cherries. Even Hughes admits there would be no coming back from anything other than a win.

Player to watch – Alexis Sanchez
Sunday’s meeting between Manchester United and Arsenal may not pack the same punch as other clashes between these two sides, especially since Arsenal will probably rest key players for a match sandwiched between their Europa League semi-final ties against Atletico Madrid. Read about the first one, won’t you?

But the third game of Arsene Wenger’s farewell tour retains its importance to the hosts as they look to seal second place before they consider taking their foot off the gas ahead of the FA Cup final. Jose Mourinho might be looking to get the job done before preparing for Wembley as soon as possible, but one of his biggest stars is finally building up some momentum.

For Alexis Sanchez, last week’s game was his “most perfect one since I joined United”. The Chilean will be desperate to follow up that man of the match performance at Wembley with another impressive showing against his former side, whose supporters will turn their ire exclusively on him now Wenger has given them what they wanted.

Sanchez shone – as did Paul Pogba – in a formation that seems to tick most of Mourinho’s boxes. But the former Gunner cannot rest on his laurels, with Marcus Rashford and Anthony Martial champing at the bit to take his place on the left, and many supporters hoping for the same. If Sanchez wants that position he seems to covet the most, then consistency is now expected, even if he claims he is still getting accustomed to being a United player.

Manager to watch – Arsene Wenger
All eyes have been on Wenger for the last week since he announced his imminent departure, regardless of how the decision was made. Everyone, including the manager, has spoken of ending his 22-year reign with a flourish, but the Gunners were already showing their best form of the season, having won seven and drawn one of their last nine prior to that damaging draw with Atletico.

Typical Arsenal: They have won four of their last five in the Premier League, scoring 14 goals, only when the pressure was off and the most pressing concern was the battle with Burnley for sixth. The trip to Old Trafford is of little tangible significance to the Gunners.

How does Wenger go into his final game at Old Trafford? On a ground upon which he has suffered extremes of emotions during 27 previous visits, it surely makes sense to preserve his most important players during what appears his least significant trip to the Theatre of Dreams – even less so than the League Cup quarter-final in 2004 which saw Arturo Lupoli line up in Arsenal’s attack.

One-v-one battle to watch – Alfie Mawson v Olivier Giroud
Alfie Mawson has a lot on his plate at the moment. The Swansea defender’s immediate focus is preserving his side’s Premier League status, while securing an England squad place for the World Cup will also weigh on his mind, as likely will the transfer speculation that has seen the centre-half linked with Manchester United and Tottenham.

Most pressing of any matter is the visit of Chelsea to the Liberty Stadium on Saturday evening. Three Swansea managers have been in place since the last time the Blues were in town and victory for the Swans would perhaps hammer the final nail in Stoke’s coffin. Three more points would also further dishearten Southampton, regardless of what they manage to get out of Bournemouth shortly before Swansea take to the field.

Mawson has a point to prove after an underwhelming performance in last week’s 5-0 dismantling at the hands of Man City. The Swansea defence is certainly not the first to be taken apart by the champions but, as Swansea seek their first win in five, a return to form is required against a top-class forward line that also has plenty to prove.

Olivier Giroud is in the process of making himself Antonio Conte’s first-choice striker, though Alvaro Morata hinted he is up for the battle by coming off the bench last week to add to Giroud’s opener at Wembley. Conte has tried both together and he could experiment with a front two again in south Wales. But, more likely after admitting he opted for Giroud against Southampton’s back three, he will repeat that selection against Swansea’s similar shape.

Football League game to watch – Middlesbrough v Millwall
Boro in fifth are the highest-placed side not yet to have secured a Championship play-off spot and there could be close to 30,000 at The Riverside on Saturday as they look to tie it up.

Millwall, though, have their own play-off ideas and a victory on Teesside would take them level on points with Boro ahead of the final weekend of the regular season. But they will have to quickly rediscover the form that saw Neil Harris’ side go on a 17-match unbeaten run that was abruptly ended by Fulham last Friday night.

To get anything out of Boro, Harris recognises the Lions will have stop “the quickest player in the league by a mile”. Adama Traore has finally begun to prove that he is far more than a sprinter in football boots with a run of form that has been one of the biggest factors in Boro’s recent run. The former Barcelona starlet has assisted all four of Boro’s goals in their 2-1 wins over play-offs rivals Derby and Bristol City.

European game to watch – Inter Milan v Juventus
Serie A is the only title race among Europe’s biggest leagues that remains alive and this weekend could have a big say in where the Scudetto finally ends up.

After letting Napoli close to within a point last Sunday, Juventus have to bounce back from recent disappointments in the Derby d’Italia on Saturday night. The champions go to Inter Milan looking to restore their four-point cushion at the summit before Napoli head to Fiorentina on Sunday, with Maurizio Sarri’s side hoping to take the field in Florence with the prospect of leapfrogging Juve in sight.

Inter would take great pleasure in presenting Napoli that opportunity by piling more misery on Juventus. But the hosts at the San Siro have their own priorities, with a Champions League place still up for grabs.

The Nerrazzurri currently sit outside the top four, one point behind Lazio and Roma, who will have to forget about Liverpool for the duration of Chievo’s visit on Saturday. Inter’s task is to keep pace with Lazio before the two side’s meet on the final weekend of the season. Inter’s plans for the summer and beyond hinge on being in the Champions League next season and they cannot afford a slip any less than Juventus.