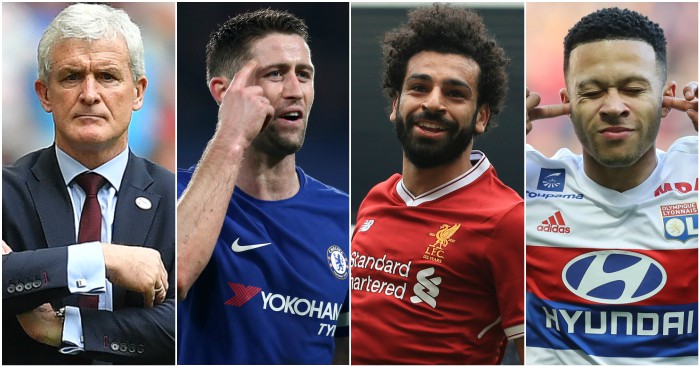 Game to watch – Everton v Southampton
Saturday evening’s Premier League offering comes from Goodison Park, where Mark Hughes goes back to yet another former ground where his return will barely be acknowledged by the home fans. Sparky, though, has far weightier issues to concern himself with than the absence of a warm welcome, and at least he travels to Merseyside with renewed hope.

Southampton finally gave their new-ish manager his first victory in charge last Saturday at the fifth time of asking, with Saints resuscitating their survival hopes with a desperately-needed 2-1 win over south coast rivals Bournemouth. After conceding three in each of the three defeats in Hughes’ first games in charge, Saints have since kept in a clean sheet while taking a point at Leicester before getting all three at St Mary’s. Has Hughes managed to halt Saints’ sleepwalk towards the Championship?

Next Tuesday’s trip to Swansea is being viewed by some as the decider of both sides’ fate but, prior to that, Saints have the trickier assignment this weekend as they jostle with the Swans for position before they face off at the Liberty Stadium. Swansea go to Bournemouth at 3pm, and with the hosts seemingly having been playing in flip-flops while carrying their deck chairs for the last month, Saints cannot rely on Eddie Howe’s side doing them a favour.

Swansea’s recent form is just as wretched, but at least the Welshmen have the motivation. A positive result for Carlos Carvalhal’s side at Dean Court piles the pressure back on Saints, and Hughes admitted last week that he doesn’t know whether his players can cope.

Last week’s triumph in a must-win match offers some encouragement that Southampton might have the cojones after all. They certainly appeared more united than Everton, who seem fixed in eighth place and more concerned with arguing among themselves about the future to be too preoccupied by the more immediate business of the Saints’ visit.

On the other side of Swansea for Saints is a final day clash with Manchester City, who have showed no signs of letting up enough to give their opponents a chance. Swansea’s last game is at home to Stoke, who could be relegated before everyone else kicks off on Saturday. All in all, Hughes needs four points from the next two games, though playing for a draw at Goodison would certainly appear to be the wrong approach.

Team to watch: Stoke
Stoke earned a stay of execution last weekend at Anfield, where Liverpool were far more preoccupied by the looming trip to Roma to worry about ending the Potters’ decade-long stay in the Premier League. It could all be over this weekend, though…

A defeat to Crystal Palace in the hosts second successive Saturday lunchtime kick-off would leave Paul Lambert’s men stranded with only one match left on 30 points – three points behind 17th-placed Swansea, who would still have three to play. “We definitely have to win two out of the three,” said Lambert prior to last week’s Merseyside visit, and the point they claimed there changes nothing. They simply have to beat Palace, then turn over Swansea on the final day.

To do that, they are going to have to find a goal or two from somewhere. Lambert has succeeded in solidifying Stoke, who had the worst defensive record in the Premier League when he took over. West Ham now have the division’s leakiest defence since Lambert reduced their goals conceded from 2.17 under Mark Hughes to 1.15 on his watch. But they are also scoring fewer since Lambert took over – just nine in 13 matches – with the Potters’ failure to turn any of seven draws into victories leaving them in the predicament they are in.

“We’ve got to gamble a little more in the final third,” said Lambert this week, offering little reassurance to any Stoke fans worried about where the goals may be sourced. Palace have had no such concerns and Roy Hodgson takes the Eagles to the Bet365 Stadium on the back of a 5-0 thrashing of Leicester. Hodgson’s side have also netted in all but one of their last 10 Premier League matches on the road so the chances are that Stoke will have to score more than once if they are to get the win they so desperately need.

Player to watch: Harry Kane
Despite returning from injury and bagging three goals in addition to an assist, April perhaps replaced August as Kane’s least favourite month of this season. The FA Cup semi-final defeat to Manchester United triggered a ‘silly’ tweet and a subsequent debate over the striker’s mental fragility after Mauricio Pochettino admitted the whole episode had left him ‘very sad’.

“I am over it,” Kane said this week, perhaps not entirely helping his own cause. But the Spurs centre-forward is on a mission over the coming week, not only to get Spurs above Liverpool into third but also to deny Reds’ striker Mo Salah the Golden Boot.

Kane is four behind Salah, though the race is not run yet. Spurs face rock-bottom West Brom this weekend before closing the season with home games against Newcastle and Leicester. Against opponents with a similar lack of motivation in the final week last season, Kane helped himself to eight goals.

Tottenham and their captain still have plenty to play for. Kane can equal or possibly set a new landmark at The Hawthorns as he stands just one short of Kevin Phillips’ 18-year-old record of 15 away goals. This weekend represents the England star’s final chance to claim that landmark.

One-on-one battle to watch – Gary Cahill v Mohamed Salah
In the context of his season, Salah is currently on the verge of a goal drought. A failure to score at Stamford Bridge upon his return to his former club would not only encourage Kane, it would represent the first time this term the Liverpool attacker has failed to score in three consecutive matches.

Like Kane, Salah has admitted that the Golden Boot is important to him, as is the opportunity to break Ian Rush’s club record. But Salah’s primary concern has to be for his team’s top four prospects, which are not as secure as they appeared. Seeing to that need will inevitably serve the other.

Salah will be up against an opponent who will similarly be hoping that his club fortunes will improve his individual prospects. Cahill has started the last four games of a “rollercoaster” season that has seen his status slip with Chelsea and England. The centre-half remains hopeful of convincing Gareth Southgate that he should go to the World Cup and keeping Salah on the leash on Sunday will be the strongest evidence the 32-year-old could present to back up his claim to a seat on the plane to Russia.

Manager to watch – Jurgen Klopp
“We have to play two more Champions League semi-finals in the Premier League,” said Klopp after watching his side seal their passage to the European Cup final. It was the second time in a week that the Liverpool manager had attempted to remind his players of their domestic responsibilities but his calls for focus on the “massive” Stoke game last weekend, somewhat understandably, appeared to fall on deaf ears.

That draw left open the possibility of being caught in the race for the top four, and Chelsea can make up significant ground on Sunday when they welcome Klopp’s presumably-weary men to Stamford Bridge. The Blues are currently six points behind the Reds, and while Liverpool can fend off the hosts’ threat once and for all with a win, that would mean bucking the trend of what may be a glorious season.

Klopp’s side have struggled to refocus on the Premier League immediately after their European adventures this season, having won only three of the 11 Premier League games they have played immediately after Champions League fixtures. And if some fatigue or lack of concentration on the immediate task in hand was ever to creep in, it may well be after Wednesday night’s drama in Rome.

The manager has three days prior to kick-off at Chelsea to find an antidote and to get into his players’ heads the importance of this meeting. A defeat to Antonio Conte’s men raises the possibility of the race for the top four going to the final day, when Klopp would doubtless prefer to have Kiev at the forefront of his mind, rather than the possibility of slipping out the Champions League qualification places. Even a point at the Bridge would be suffice but defeat would give the manager grief he could do without.

Football League game to watch – Rochdale v Charlton on Saturday; Cardiff v Reading on Sunday
The race for promotion from the Championship goes to the final day with Cardiff in the driving seat, one point ahead of Fulham. Both sides face opponents on 43 points, two points above the drop zone and still wary of the threat of relegation. The Cottagers go to Birmingham, while Cardiff host  Reading. It would take quite a twist to deny Neil Warnock a return to the Premier League, but this is the Championship…

The day before you settle down to watch that finale at 12:30pm on Sunday, there is a battle to be won in Lancashire for the right to retain a place in League One next season. Rochdale’s clash with Charlton is Sky’s Saturday evening alternative to BT Sports’ Premier League offering, with Dale fighting the threat of relegation, while the Addicks are looking to avoid a defeat and a six-goal swing that jeopardise their play-off spot.

If Dale defeat Lee Bowyer’s side, attention will turn immediately to Sixfields, where Northampton host Oldham. The Latics task is simple: win and safety is assured. If they produce any other outcome against a Town side looking for the 9-0 win that gives them a hope of staying up, then the door is open for Keith Hill’s Dale.

European game to watch – Lyon v Troyes
It’s a Clasico weekend but there is very little riding on this particular meeting of Real Madrid and Barcelona compared to most. Though it does represent the champions’ toughest remaining test as test as they bid to become the first team to go unbeaten through a La Liga season. Real, who won’t be bothering with any guard of honour nonsense, would love to rain over that particular parade but their focus is likely already on the Champions League final and, arguably, the chance to outshine whatever Barca have achieved this term. Still, it’s a Clasico and you will be watching….

The stakes are sky high in few places across the continent, but one of the tightest battles still raging surrounds the Champions League places in France, with three teams fighting for two spots. Lyon have put together an impressive run to leapfrog Monaco by a point last week, with Marseille currently the odd one out another point adrift.

Sunday afternoon sees Lyon and Monaco in action on BT Sport, with Lyon hosting relegation-threatened Troyes, while Monaco go to Caen, who could still get pulled into the relegation battle, especially if they maintain their current form that has produced six defeats and two draws from their last eight.

Lyon are in must-watch form at present. They have won their last six matches, scoring 20 goals in the process. Memphis Depay is also starting to justify his own hype, having netted in his last six games. The Manchester United flop has scored or created 14 of Lyon’s last 18 goals.