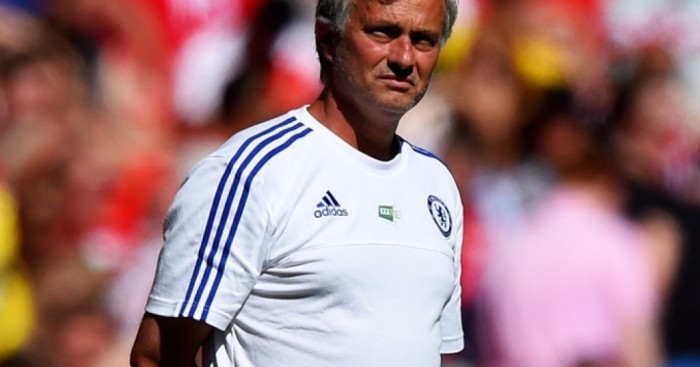 After days of talk of medical staff and Mourinho’s grouchiness, focus turns only to his side’s performance against City. Plus Rooney, Kane, Cech and Wenger…

TV Viewers
Officially the longest weekend in Premier League history; 74 hours from first whistle to last kick. Aston Villa’s home game against Manchester United is a Friday night one-off, but also acts a precursor to a regular slot from next season.

I’m not quite sure how I feel about Friday night football, but the creep to saturation point is deeply enjoyable for me. Since the season began last Friday, there will have been 12 consecutive days with a British team televised live until a one-day gap next Thursday. Then we’re straight back on it again. Welcome back, football.

Petr Cech
Well that didn’t go so well. After weeks of Arsenal fans insisting that Cech could propel them into the title race, the goalkeeper promptly made such thoughts look very foolish indeed. It is not that Cech’s errors were catastrophic, but the air of invincibility he was supposed to provide was so instantly lost on the breeze.

Things are unlikely to get easier for Cech. No Premier League team scored more set piece goals than Crystal Palace last season – that is exactly where Arsenal’s new goalkeeper must head next.

Once is never, twice is always. Arsenal supporters will allow some first-day nerves on Cech’s part. Drop a b*llock on both of his first two weekends in the shirt and fans would be forgiven for considering their club cursed.

Jose Mourinho
For all Mourinho’s attempts at mind games and attention deflection, it is really quite easy to tell when Chelsea’s manager considers himself under pressure. The more he moans and the more he scapegoats, the more the pressure is being felt. This is an open book.

It has not been a good few weeks for Mourinho. Rotten pre-season form was combined with a lack of meaningful action in the transfer market and another hamstring injury suffered by Diego Costa. The striker looked laboured against Swansea, registering one shot all game, and two dropped points and a red card for Thibaut Courtois failed to assist the mood. It was Eva Carneiro who bore the brunt of that anger. That was a low blow.

Mourinho is too stubborn to backtrack on his words, and so must lie in the bed he has made. However, the knives are now out for a manager whose actions have left a sour taste – even Chelsea supporters in our Mailbox have declared themselves embarrassed. The view of Roman Abramovich is as yet unconfirmed, but the Russian is known to detest bad publicity.

On Thursday Swansea manager Garry Monk understandably expressed his frustration at the lack of focus on the match itself: “What Chelsea choose to do internally is their choice, that’s his prerogative and for others to judge. The disappointing part of it all is that’s what the national press has decided to focus on and not the performance my players put on.” Just like at Stamford Bridge on Saturday, Monk has got a point.

We may have spent the last few days discussing anything but Chelsea’s two dropped points, but on Sunday afternoon all eyes will be on the performance of Mourinho’s side. The only way to ease the tension is through victory at the home of the new title favourites. The first 16 Conclusions of the season could not have been arranged better.

Manuel Pellegrini
I’ll not yet fully eat my words, because there is plenty of time still to dine, but the turnaround in Pellegrini’s fortunes is pronounced. I declared myself amazed at the end of last season that the Chilean had kept his job despite Manchester City’s alarming drop off in form, but you can only be impressed with his demeanour since. I’ve even ended up picking City to win the league.

There are still obvious issues to address. The departure of Edin Dzeko and Stevan Jovetic leaves a meaningful hole where a decent back-up striker should be, and Fabian Delph’s injury doesn’t help. Nor too do Sergio Aguero’s hamstrings and the looming spectre of Pep Guardiola over the manager’s dugout, but Pellegrini moved all to one side against West Brom on Monday. It’s easy to forget just how sexy David Silva, Yaya Toure and Raheem Sterling can be. Add Aguero and Kevin de Bruyne, and we’re walking awkwardly down the street.

Sunday provides an early chance for Pellegrini to draw a line under last season, and for City to firmly establish themselves as title favourites; a five-point gap ahead of Chelsea after two games would be magical. The principle conclusion from the opening weekend was that City clicked into gear like no other side. Now is the time to keep on accelerating.

“Lovely to see you Mr Kneejerk, what can we help you with?”

“It’s about Sunderland and Norwich, you see. I know I shouldn’t say it, but both of them lost by two goals last weekend and defended really badly. Both clubs were touted for relegation, and don’t seem to have improved their sides enough. ”

“Well Mr Kneejerk, there’s no doubt you’ll take some stick for this…”

“…I know, but I just feel that by playing each other this weekend, the game becomes must-not-lose. Do so and it suddenly feels like they are scratching around for points, left with nothing after two relatively gentle matches and with harder games to come.”

Harry Kane
The first weekend of the season wasn’t ideal for last season’s top goalscorers – not one of the nine players to score more than 12 Premier League goals last season netted. You would have got a good price on Sergio Aguero, Diego Costa, Harry Kane, Alexis Sanchez, Saido Berahino, Olivier Giroud, Wayne Rooney, Eden Hazard and Christian Benteke all failing to score.

For Kane, however, the need is greater. With Roberto Soldado finally out of the club and Emmanuel Adebayor not far behind, he is the only wanted first-team striker that Tottenham possess.

“I think we need one more striker and we have different players that can play like a striker,” Mauricio Pochettino said on Thursday. I agree with the first half of that.

Kane managed three shots at Old Trafford last weekend, all off target. He looked interested in driving his side forward, but that enthusiasm was curbed by the listlessness of those around him. Now faced with Stoke’s defence at White Hart Lane, Pochettino has little choice but to simply ask for more of the same.

The transfer window may not have ended, but someone might want to prod Daniel Levy and remind him that the season has begun. Without providing last season’s boy wonder with enough support or competition, they are effectively crossing their fingers on a double-six being rolled twice in succession. That’s desperately unfair on Kane.

Spurs got great money for their fringe players over this summer, but you can’t play a pile of cash in central midfield or a bank transfer up front. The risk is that the club are allowing everyone else a three-week headstart.

Arsene Wenger
“One of our targets is to start strongly, we’ve had good preparation and that should give us much-needed confidence. The Premier League is a fight in every single game so we have to prepare ourselves mentally for that and come out of the blocks straight away” – Arsene Wenger, August 7.

Rather than “coming out of the blocks” at pace, Wenger’s Arsenal instead slipped over the starting line, banged their head on the track and woke up an hour later just as the laughter was dying down. If that was the examination of their title credentials, they barely earned the mark for spelling their own name correctly.

Now there can be no more excuses for Wenger. Lose against Crystal Palace on Sunday, an opposition against whom Arsenal have won their previous five matches by an aggregate scoreline of 13-3, and the questions will begin in earnest. This week brought talk of a bid for Sevilla holding midfielder Grzegorz Krychowiak. Just another case of after the horse has bolted through the Emirates door?

Tony Pulis
“I think I’ve got to hold my hands up,” Tony Pulis said on Tuesday. “I got things wrong. I wanted to play Saido and Rickie, but it went against everything I’ve ever done against the bigger teams. We’ve always filled the midfield and been strong. What we did in truth was allow Silva too much room in the first half. He completely dominated the game, controlled the game and I take responsibility. It’s not the players.”

Honesty in managers is seen as A Good Thing, an acceptance that not every defeat needs to be blamed on an official, a mistake, mishap or misfortune. Admission is the first step to recovery, and all that.

However, confession can be a dangerous game. Critics will ebb away at the cracks if they are not fixed, undermining the structure of your very reign. Making apparent your errors only increases the scrutiny of your next actions. That is the reality Tony Pulis faces at Vicarage Road, having admitted a cock-up against Manchester City.

Whether West Brom stick with two strikers or tighten things up in midfield is almost a moot point, although getting Salomon Rondon, Saido Berahino and Rickie Lambert into one Tony Pulis team is impossible. The manager simply needs to make amends. Fail to do so, and Pulis’ own fingers won’t be the only ones pointing in his direction.

Wayne Rooney
In emphasising that he sees Javier Hernandez as the second choice to Wayne Rooney, Louis van Gaal may have instigated some widespread wincing across Manchester’s red half. There are many supporters unconvinced that Rooney is good enough to lead the line. For Hernandez, a player unwanted last season, to have also progressed up the queue is deeply worrying. The Mexican has started more international matches (28) than league games (23) since May 2012.

For now, United supporters must cross their fingers on both hands. The left hand can pray for Rooney to stay fit, and the right can wish that he can hit form for an entire season across four competitions. It seems an unthinkable (and unrealistic) demand of a 30-year-old with 662 competitive senior career games played. A goal at Villa Park would help ease at least the immediate worries.