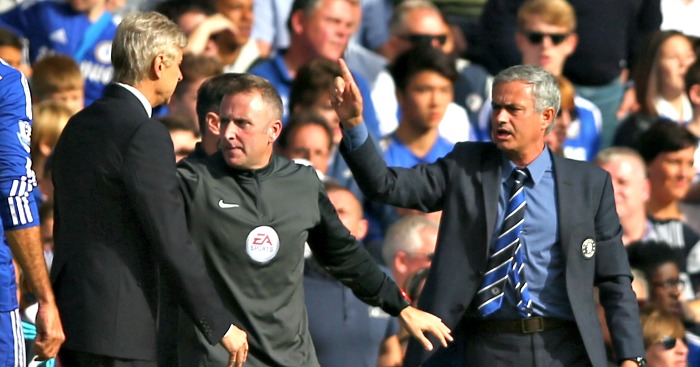 Game to watch – West Ham v Tottenham
December 10. That was the last time the gap separating the Premier League leaders from second place was fewer than three points. Chelsea’s record-equalling run and unerring dominance saw them boast a 13-point lead over their nearest challengers in March; Tottenham could cut the gap, and subsequently the room for error, to just one point by the start of May.

Many made the mistake of assuming that Chelsea would comfortably stay the course, even when they suffered a couple of bumps in the road. These hallowed pages certainly did. And few expected that Tottenham would hunt their prey down so relentlessly. They head into a second derby in five days in a phenomenal run of form; their nine consecutive Premier League victories is the joint-sixth best in the competition’s history. They have found their second wind in the title race just as Chelsea are starting to feel a stitch coming on.

Mauricio Pochettino’s side might well run out of time before the finish line, but West Ham will be eager to end their hopes as early as Friday evening. The Hammers are surely safe from relegation, but it would be dangerous to consider them either an easy opponent or an afterthought.

First and foremost, this is a game between two teams who simply dislike each other. This is Paul Stalteri scoring a stoppage-time winner. This is Freddie Kanoute, Michael Carrick, Scott Parker and Jermain Defoe. This is a dodgy lasagne.

West Ham basked in the glory of their victory over their rivals in the final game of the 2006/07 season, and the same result would leave Tottenham stomachs turning in a similar fashion. They have been handed the double-edged sword of playing before Chelsea: A win increases the pressure, but anything else and their rivals can capitalise on the slip.

Three points would not only keep Tottenham firmly in the title hunt, it would confirm their place in next season’s Champions League group stage. West Ham will hope to save face in front of both their home fans and the Sky Sports cameras. The last ten meetings between these two sides have produced 33 goals. Friday evening should be fun.

Player to watch – Gylfi Sigurdsson
“Your friends are asking you all the time: ‘Are you going to sign for Everton?’ But I’m really happy here. I’d been discussing a new contract with the club for quite a while. It got delayed because of the Americans coming in to take over. Once that was done, there was no reason why I would want to go.”

In the glare of hindsight, the Iceland international undeniably made the wrong decision. Instead of a battle to qualify for European competition, he is immersed in a fight against relegation.

Fortunately for Sigurdsson, his nine goals and 12 assists has given Swansea a glimmer of hope, but also ensured his own reputation is untouched. Everton remain interested in the 27-year-old, and a promising performance could service both his own aspirations and those of his current employer.

Team to watch – Liverpool
Jurgen Klopp’s tenure at Liverpool can be neatly summed up in a microcosm of his results against Southampton. The 6-1 League Cup victory over Saints in December 2015 represented the free-flowing, often irresistible attacking verve; the 3-2 defeat when leading 2-0 in March 2016 pointed to an uncanny ability of shooting oneself in the foot.

Klopp has only won one of his six meetings with the south coast side, but one expects he would be just as happy to watch his players grind out a gritty 1-0 victory as he would to witness another six-goal mauling. A goal of the season contender wouldn’t go amiss, either.

As things stand, Liverpool decide their own fate. Win their final three games, and they qualify for the Champions League. It really is that simple, but of course, things never are with Klopp’s men.

Manager to watch – Pep Guardiola
When Avram Grant is publicly questioning your managerial acumen, you know something has gone wrong.

The claim that Pep Guardiola “didn’t do his homework” on Premier League football is tiresome and ignorant. The problem is not that he didn’t do it, it’s just that his grades have been markedly lower than expected. Knowing the former Barcelona and Bayern Munich manager as we do, he would have planned meticulously for his first season in England, but that alone never guaranteed success.

That being said, Champions League qualification is still something Manchester City have in their own hands, even if it is threatening to slip from their grasp. Fifth takes on sixth this weekend, and fourth absolutely has to take advantage.

Manchester United and Arsenal face off on Sunday afternoon, but City can put a four-point and nine-point gap between themselves and those two sides with a victory over Crystal Palace on Saturday. No homework assignment is necessary to predict what Sam Allardyce will have in store.

One-on-one battle to watch – Arsene Wenger v Jose Mourinho
“There are some managers, the last time they won a title was 10 years ago, the last time I won was a year ago. If I have something to prove, imagine the others! To finish fourth is not the aim.”

Circumstances change, and expectations alter along with them, but let it never be forgotten that Jose Mourinho dedicated some of his first press conference as Manchester United manager to Arsene Wenger, as well as his new club’s title aspirations.

To finish fourth was not the aim back in July, and with an impressive 1-0 Europa League semi-final first-leg win over Celta Vigo on Thursday, nor is it in May. But Mourinho knows more than most that every good manager needs a reliable Plan B. To win the Europa League is no guarantee, but a one-point gap to fourth place is a decent enough back-up.

The Portuguese has already made it expressly clear that he will rest players for the trip to Arsenal on Sunday, but then Louis van Gaal engineered a 3-2 win over the Gunners last February with a defence of Guillermo Varela, Michael Carrick, Daley Blind and Marcos Rojo, and with a debuting Marcus Rashford up front. Mourinho can hardly fall back on the excuse that he had to play reserves such as £36million striker Anthony Martial.

And while the manager will be keen to rest players, that will not impact upon his desire to beat a bitter rival. Wenger said on Thursday that he is willing to make “peace” with his former enemy, but war is more likely this weekend – on the pitch, if not the touchline.

Football League game to watch – The League One play-offs
Take your pick, with both semi-finals finely poised ahead of Sunday’s second legs. Bradford will take a 1-0 lead to Fleetwood, while Millwall and Scunthorpe played out a goalless draw on Thursday. The reward for the respective victors will be a final at Wembley to decide who gets to host Sunderland at some stage next season.

European game to watch – Dortmund v Hoffenheim
Bayern Munich might have won their fifth consecutive Bundesliga title last week, but all is not settled just yet in Germany. The top four is decided, but the order is not set in stone.

RB Leipzig will surely claim second place, as they boast a five-point gap with three games remaining, but what of third? The final position which assures a direct route to the Champions League group stage is up for grabs. Little wonder then that Marco Reus describes the game between fourth-placed Dortmund and third-placed Hoffenheim, with one point between them, as “an absolute cup final”.

Even leaving aside the lasting implications, this should be entertaining. Discounting Bayern, Dortmund have scored the most league goals this season (65), while Hoffenheim have the fewest defeats to their name (3). Thomas Tuchel is the old, cantankerous sod at 43, with 29-year-old Julian Nagelsmann needing to be taught a lesson in respect by his elders.

Where is Mike Dean this week?
Why, he’s the fourth official at Turf Moor as Burnley take on West Brom. Fourth official. Turf Moor. Burnley. West Brom. The FA clearly know nothing about maximising your assets.