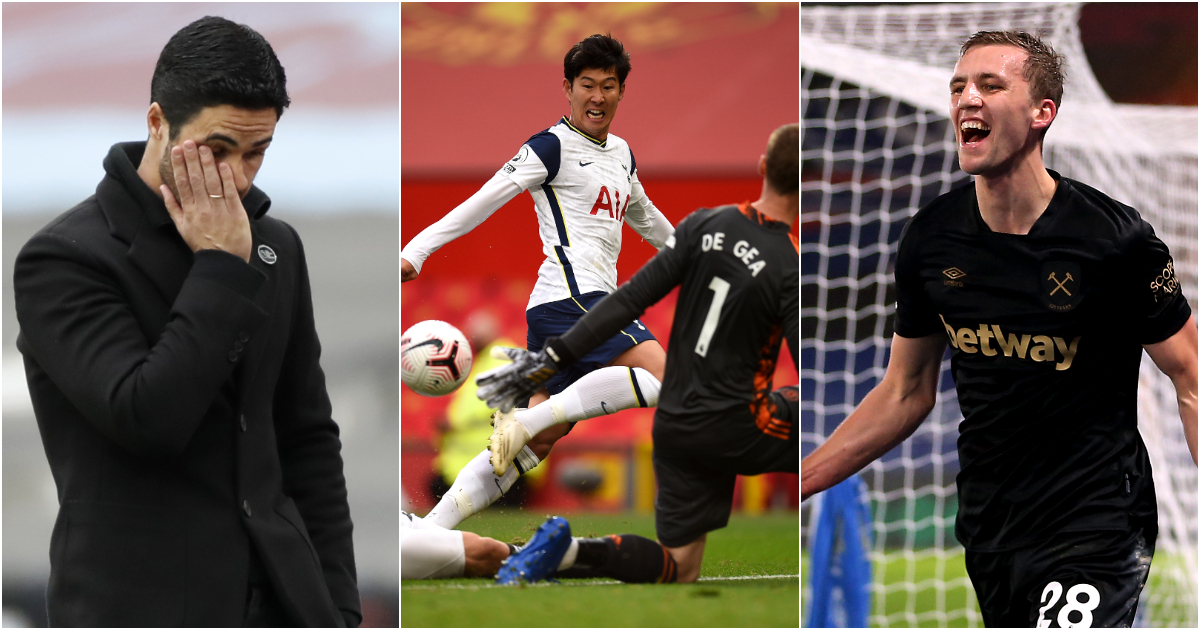 Game to watch: Tottenham v Manchester United
This should be absolutely fascinating. The team that often starts fast and then sputters to a halt against a team that rarely seems to even be paying attention for the first 15 minutes yet still finds a way to win as often as not. Then there’s that daft United away record to add to the mix, plus a veritable f*ckton of Mourinho Narrative and the memories of that wild October afternoon at Old Trafford when Spurs inexplicably put six past a shellshocked United. A result that looks even madder now than it did then not just for the scoreline but the fact it was United who took the lead and Spurs who roared back to win from behind.

Since that silliness, both teams have had spells at the top of the table but are now in the distance watching City disappear. For Spurs, though, United have also overtaken them and disappeared themselves as a season that promised so much has dissolved into a series of Mourinho outbursts and disasters that United fans will recognise all too well. Thanks largely to the ridiculousness of Harry Kane, Spurs remain just about among the gaggle of clubs competing for what appears to be the one remaining Champions League spot, although in reality even a Europa spot is far from assured.

And even getting themselves cleverly knocked out of the Europa while United foolishly beat Milan to give themselves an advantage for this crunch game – classic Jose, that – has backfired. In Jose’s defence, how was he to know that Granada would offer so little that United could help themselves to a 2-0 win without even getting out of second gear? It’s just not fair. And Harry Maguire, Luke Shaw and Scott McTominay can all give absolutely everything at WHL2.0 as well, safe in the knowledge that they’re safely suspended for the second-leg formalities. They’ve already out Josed Jose and the game’s still two days away.

Manager to watch: Mikel Arteta
From one north London high farce to the other, with Arsenal providing yet another timely reminder on Thursday night that if Spurs didn’t exist we would have to invent the word ‘Arsenaly’.

Last weekend’s piss-poor defeat to Liverpool means the league is just about irrelevant now for Arsenal. The Gunners have a kind run-in and the lower rungs of the top six are filled with unreliable and feckless wastrels, but this Arsenal side simply cannot be relied upon to take advantage.

Certainly any kind of slip-up against bottom-of-the-table Sheffield United would put paid to any lingering domestic ambition beyond face-saving and leave Arteta and company focusing fully on a suddenly awkward continued Europa League progress to salvage a season in which Arsenal have turned a hundred corners and got precisely nowhere.

Player to watch: Tomas Soucek
West Ham’s giddy pursuit of a Champions League spot faces a stern test this weekend against Leicester, with Tomas Soucek set for a busy afternoon without the help usually provided by Declan Rice alongside him. They have been one of the division’s most effective partnerships this season, and while Rice wasn’t missed when West Ham merrily sauntered off into a 3-0 lead at Wolves, it was a different story when the comeback started. It will be a different story again this weekend against genuinely top-tier opposition and a Leicester side who still have plenty of work to do to secure their own top-four finish and avoid a repeat of last year’s meltdown.

This is a sub-optimal fixture for a team that might fear a wobble turning into a collapse. Losing to Manchester City last week isn’t really a problem, just like losing to this West Ham team would not, in isolation, be a cause for alarm. But losing those games in successive weeks, after what happened last season, will cause a few bumholes to start twitching at the King Power.

On the other hand, there is surely no better time to play West Ham than when they are Rice-less. Unless Soucek can find yet another higher level in his spectacular season.

Team to watch: Leeds
Watching Leeds is rarely a bad option for the neutral, and with Bielsa’s Boys safe as houses in mid-table they are completely free to treat Manchester City away with the sort of reckless abandon they would’ve treated it with anyway were they three points clear at the top or three points adrift of safety in 18th. It’s why they’re such fun.

As such, this is either going to turn into an absurdly brilliant slice of Saturday lunchtime fun in which Leeds’ freewheeling all-action football allows them to go toe-to-toe with City as they did with Liverpool back on the very first weekend, or they’re going to get absolutely smashed to pieces by a City that is weirdly yet to rack up a truly massive score in any game this season but surely must do sooner or later.

Either way, this is sure to be gloriously or grimly entertaining to watch and has absolutely no chance of being a dour and drab affair. None whatsoever. Definitely not. There is no such thing as a jinx.

Football League game to watch: Millwall v Swansea
You can watch this game on TV, but you’ll not read anything about it on Swansea’s social media after they decided to stage a week-long boycott in response to abuse and discrimination and big tech’s failure to act.

And the club haven’t ruled out making that boycott a longer or even permanent one if more isn’t done about the relentless abuse that has become just another part of the football landscape and shows absolutely no sign of abating.

European game to watch: Real Madrid v Barcelona
Don’t say we never dig up an underappreciated gem to bring to your attention. These two little-known but bitter rivals are currently involved in a cracking three-way title tussle in Spain, so there’s a bit of extra spice – not that it’s needed! – for this particular renewal of a fixture the locals call ‘El Clasico’ in a clever little play of words on the infamous Clasicoast rivalry between Southampton and Bournemouth.