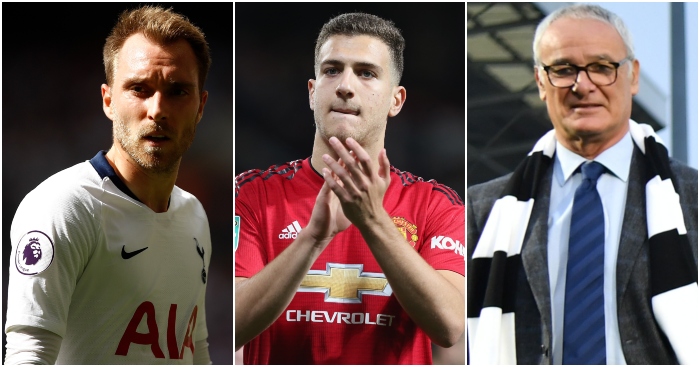 Game to watch: Tottenham v Chelsea
By offering this humdinger on Saturday evening, it’s almost as if the Premier League knows it has some making up to do after deserting us for a couple of weeks.

Spurs have had a rather more mixed start to the season than Chelsea but no side would relish wrecking the Blues’ unbeaten record more than Mauricio Pochettino’s men. And in becoming the first team to triumph in the face of Sarri-ball, Spurs can leapfrog their London rivals in the table, which would make a mockery of all that crisis talk a few weeks ago.

The problem for Pochettino, though, is that Spurs seem to have something of a mental block against Chelsea. They may have won three of their last seven against the Blues – it took them 49 previous attempts to achieve three victories – but against no side have Chelsea kept more clean sheets than Spurs. And the fact Spurs are hosting offers Pochettino little more encouragement. Of all the Premier League sides, they have won the lowest percentage of their points at home this term. Then you consider that no side has beaten another particular opponent at Wembley more times than Chelsea’s four wins out of seven against Tottenham, while the Blues have managed to shut out Spurs on more occasions than any other team. It adds up to possible disaster.

Pochettino needs to take encouragement where he can find it and Christian Eriksen’s return is certainly a shot in the arm. The playmaker has been in and out of Spurs’ XI since picking up an injury at Brighton nearly two months ago, which was when he last started in the Premier League. Since then, Spurs have managed more than a single goal in only two of six matches.

Eriksen admitted this week that Spurs are yet to ‘click’ and now would be an opportune time for all the pieces of Pochettino’s plan to come together. The coming week sees them face Chelsea then Arsenal, with a visit in between from Inter Milan, who could end Spurs hopes of Champions League progression.

But for now, Chelsea is Pochettino’s focus and Everton have done them a favour by laying out the blueprint for how you can stop Sarri’s side. It is a little more complex than ‘stop Jorginho, stop Chelsea’ but as the Toffees showed, if you can surround the Italy midfielder, then he will find it difficult to orchestrate his team-mates. Then there is the small matter of Eden Hazard, but when Jorginho struggles, the Belgian tends to get sucked deeper. If Hazard wriggles free, then at least Spurs will have one of the defenders who knows him best – Jan Vertonghen. And Hugo Lloris’s unpredictable form means Spurs will most likely have to cut out Hazard’s threat at the source, rather than rely on their uncharacteristically inconsistent keeper.

This is also the start of a huge period for Sarri. He may have gone 18 games unbeaten since moving to Stamford Bridge but the next fortnight will offer more tests than most, with a derby against Fulham under new but familiar management on the horizon before a trip to Wolves and the visit of Manchester City. To have their momentum abruptly ended before that run would do a huge favour for their title rivals. Spurs will go some way to deciding if they will be one of those title rivals this weekend.

Player to watch – Declan Rice
Amid all the furore over the West Ham youngster’s contract and the age he is taking to decide to which country to pledge his international allegiance, the 19-year-old has been hugely impressive in Manuel Pellegrini’s midfield. Saturday, though, offers his biggest test when the champions arrive at the London Stadium – and perhaps his biggest opportunity.

Playing in central midfield, Rice was superb against Manchester United earlier this season when the Hammers out-thought and out-fought their visitors. Jose Mourinho was most impressed and the United boss has reportedly declared his interest in the versatile starlet.

Saturday could offer Rice another shop window. Manchester City are in the market for a holding midfielder who can eventually replace Fernandinho but the Brazilian is far from finished. Pep Guardiola has his eyes on Ajax starlet Frankie de Jong but he faces competition from Barca for the Dutchman and the City boss may be disappointed again after being unable to recruit such a player last summer.

If Rice can get to grips with Silvas David and Bernardo then Pep will certainly take note, especially given the youngster’s quality at centre-back too.

Team to watch – Arsenal
It seems strange to say of a side on an unbeaten run of 16 matches, but they return to action after the international break looking to rediscover some form. After 11 consecutive victories, Unai Emery’s side have won one of their last five – that victory was a less-than-convincing 2-1 win over League One side Blackpool in the Carabao Cup.

The Gunners got out of jail against Wolves last time out but the break has gone as well as it could, with Arsenal’s internationals returning in good health. Pierre-Emerick Aubameyang and Alexandre Lacazette have struggled with injury but both trained at London Colney this week rather than travel with Gabon and France respectively.

It is fortunate that Arsenal appear in good shape because a testing ten days lie ahead. After the visit of sixth-placed Bournemouth – who could be one point or seven off the Gunners come Sunday evening – then comes the north London derby at home to Spurs before a midweek trip to Manchester United. Chuck in a trip to Ukraine three days before the derby and Emery will likely have been glad of the chance to take stock.

The Arsenal boss is concerned about his side’s tendency to start slowly. The Gunners are one of only two sides – Cardiff are the other – yet to hold a half-time lead in the Premier League. You could apply a positive spin and say that their unbeaten record in spite of their poor first-period performances is a sign of spirit and character that has not always been synonymous with Arsenal in recent years. But it is not sustainable to achieve their stated aim of returning to the Champions League by digging themselves out of holes twice a week.

In contrast, Bournemouth start rather better, especially at home. On their own patch, the Cherries haven’t trailed at the break yet this term. Arsenal will need to be on their mettle from the off on Sunday if they are to begin a crucial pre-Christmas period by continuing their unbeaten run.

Manager to watch – Claudio Ranieri
There’s rarely a good way to change a manager but Fulham made a better fist of it than most. The announcement of Ranieri’s appointment came at the same time we were told of Slavisa Jokanovic’s sacking, and the former news certainly overshadowed the latter.

Ranieri has been at work now for a week and a half but we are led to believe he has been aware of the jobs to be done for longer. First on the list: sort out the Premier League’s worst defence.

Jokanovic cannot be accused of not trying to plug their leaky backline but the more he tried the worse it got. Persistent changes to personnel and eventually shape failed to have the desired effect and the Tinkerman cannot afford to continue with such a haphazard policy. Fortunately for Fulham, Ranieri has proved he knows how to make a side more resilient.

It likely means an end to the approach that has won Fulham so many plaudits over the last year but what good is a possession-based approach when it is built upon the flimsiest of foundations? The Cottagers may enjoy less of the ball under Ranieri but you can be sure they will be harder to beat.

Fortunately for the Italian, he has one of the kindest opening games he could have wished for. Southampton have the second-worst attack in the Premier League and though Mark Hughes’ men are creating opportunities and taking shots, only Huddersfield have a worse conversion rate.

It is unreasonable to expect Ranieri to have turned Fulham’s defence into a tight, supremely organised unit already, but against the Saints, maybe they don’t have to be.

One v one battle to watch – Diogo Dalot v Wilfried Zaha
Jose Mourinho signed a player he believes to be ‘the best full-back in Europe in his age group’ but since Dalot’s arrival from Porto for £19million, we have had precious little opportunity to judge for ourselves.

Two appearances in the Champions League and Carabao Cup have offered some encouragement but injuries have denied Dalot a Premier League debut prior to Saturday afternoon. The 19-year-old is fit and ready for Palace’s visit, which is handy for Mourinho given Luke Shaw is suspended.

If, as expected, Ashley Young switches to left-back and Dalot comes in on the right, then he may well be in for a baptism of fire against one of the Premier League’s most dangerous wingers.

Zaha has recovered from the hamstring injury that forced him to miss the visit of Spurs a fortnight ago and Roy Hodgson has to decide whether to put him up against the newbie on Palace’s left, or let him have some fun through the middle. Either way, Zaha is going to Old Trafford with a point to prove.

The former United player spoke recently about the ‘hell’ he endured at Old Trafford and the lack of support he was offered by the club. Some United fans feel the club gave up too easily on the then teenager but Zaha has given little evidence up close to the Red Devils as to why they should regret getting rid. Since returning to Selhurst Park, in five Premier League matches and an FA Cup final against United, Zaha hasn’t been on the wining side, nor has he scored or made an assist.

European game to watch – Atletico Madrid v Barcelona
Diego Simeone’s 14th attempt to beat Barca in a La Liga meeting takes place on Saturday night, with only a point separating the two sides at the top of the table. After losing nine league meetings and drawing another four, might this be the time the Atletico boss finally breaks his duck?

Football League game to watch – Aston Villa v Birmingham
Given Arsenal’s tendency to start slow, Gooners may as well join everyone else in swerving the first 15 minutes of their trip to Bournemouth to watch the conclusion of a potentially enthralling second city derby on Sunday lunchtime.

Only a single goal separates Villa and Blues in 11th and 12th place respectively before they meet at Villa Park but their mid-table positions somewhat mask the progress being made by both clubs. Sitting four points off the top six highlights the improvement taking place at St Andrews, but Garry Monk is making a positive impact beyond the white lines too as the team and club seeks to rebuild its identity and strengthen ties with fans that have been strained in recent years.

Villa too are in transition, with Dean Smith only five games into his reign. But, especially during the demolition of Derby last time out,  there are already signs that this is a team being built in his image, with three wins and three clean sheets since taking over the most tangible sign of progress.

For the first time in a long time, there is a buoyancy about Villa and Blues. Tune in.