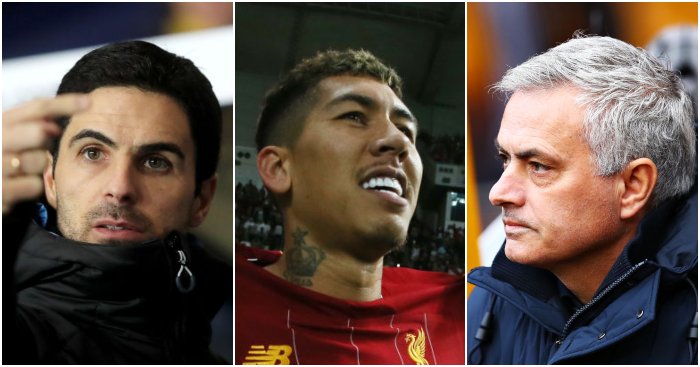 Game to watch – Tottenham v Chelsea
There is a danger in analysing and scrutinising each and every Jose Mourinho word and action. The Portuguese has established such an aura and reputation that he cannot move, speak or think without tedious phrases such as ‘mind games’ or ‘siege mentality’ being attached.

But there was a moment of typical exaggeration and embellishment early in his Tottenham reign. “When I arrived we were 12 points behind the last Champions League position and I didn’t want to think about it, I just wanted to play matches,” he said. “I think we were eight or nine from a Europa League position.”

The gaps were actually 11 and three – and not wanting to think about it clearly failed to control the impulse – but that mattered not. After wins over West Ham, Olympiakos and Bournemouth, Mourinho was eager to emphasise his immediate impact. And with that came a first public challenge to his new players: “We play Chelsea at the end of December, if the game was tomorrow, we would play them with six points difference, it would be a fantastic situation to play them, but we play them in the end of December. We have to keep close, as close as possible.”

It has required not only a fine run of domestic Spurs form – WWLWW – but a disastrous sequence of Chelsea league results – LLWLL. And that seems a pertinent example of how these two sides are currently diametric opposites: the former are slowly adding defensive organisation to their attacking prowess; the latter remain porous but have lost their edge going forward.

The same goes for the managers, as the veteran master faces his inexperienced apprentice. “In the first weekend I was worried and I’m still worried with the big matches,” said pundit Mourinho of these callow Blues last month. “I think really, really great work by Frank. But they lost twice against United, they lost against Liverpool at home.”

And they would go on to lose their next game: to Manchester City at the Etihad. Chelsea’s record against the champions, Liverpool and Manchester United this season thus reads: P5 W0 D1 L4 F5 A12. August draws with Leicester and Sheffield United mean the current highest-placed team they have beaten under Lampard are Wolves in eighth.

Arsenal await the Blues on December 29, but Chelsea’s first of two visits to north London in a wintry week will offer a much better estimation of where they stand. The same goes for Mourinho, who can ill-afford to bump into two old lovers in three weeks and have his new flame show them up twice.

Manager to watch – Mikel Arteta
Keep an eye on the Goodison Park stands, too, as Jordan Pickford’s goalkeeping threatens to test the physics of Carlo Ancelotti’s infamous brow.

Mikel Arteta could be joining the Italian in watching from afar. But even if he does not take his place in the dugout, he ditches his red tunic, green spandex, yellow cape, green gloves and utility belt in favour of a full black bodysuit, gauntlets, boots and cape this weekend. Which is to say Robin is stepping out of the shadows to become Batman. Or something. I’m not sure. I’m headed to the work Christmas party soon and I’ve completely switched off.

Arteta makes his managerial bow not only in familiar surroundings, but with a clear idea of the challenges he faces. There was no better seat from which to view his new employers reach new depths on Sunday.

It was not that Manchester City did not shift out of first or second gear. It was that they happily cruised along in neutral and Arsenal still came nowhere close to keeping up. Pep Guardiola started Phil Foden, gave Benjamin Mendy some priceless minutes in his return from injury and advised calm and control after a lightning start. City took a 3-0 lead in the 40th minute and played with their prey for close to an hour thereafter.

Everton cannot match City for quality or talent, but Duncan Ferguson has ensured they will give any side a match in terms of organisation, physicality and fight. A team “scared” by Watford will be petrified by what greets them on Saturday lunchtime. Or will they? How soon can Arteta change this Arsenal side?

Team to watch – Leicester
The best-case scenario is a four-point gap to Liverpool when Boxing Day is over. The worst possible outcome is that the Reds pull further clear with a win at the King Power Stadium next week, before Manchester City leapfrog the Foxes by beating Wolves on the 27th. That there would be disappointment at occupying third place at the halfway stage of the season is testament to Leicester’s brilliance.

They have been here before. Top of the table on Christmas Day 2015, the Foxes lost at Anfield on Boxing Day and drew with City three days later. It was a momentary wobble that would soon be corrected.

Brendan Rodgers might take those same results four years later. The message will inevitably be to manufacture some sort of title race for added intrigue, but Leicester’s focus ought to be on what’s immediately behind them rather than any specks in the distance ahead.

Not least because, at every stage of their recent development, they have caused Pep Guardiola problems. Even in the midst of their title hangover in December 2016, Jamie Vardy proved far too much for City in a 4-2 win. The Foxes came from behind to earn victory against the same opponent last Boxing Day. And May’s meeting would have ended in stalemate were it not for Vincent Kompany’s prowess or Kelechi Iheanacho’s profligacy.

The gap back then did not seem considerable; it has narrowed further in the seven months since. Leicester can manipulate it further in their favour by channelling the ruthlessness and fight they displayed against Tottenham and Arsenal, as opposed to the blunt trauma they experienced at Manchester United.

Player to watch – Harry Maguire
Manchester United’s quest to reach double figures in points for the season against bottom-half teams takes them to Vicarage Road on Sunday. After a six-game unbeaten run, have they turned a corner?

Most will look to Marcus Rashford for inspiration, while pondering whether Anthony Martial or Mason Greenwood will lead the line. Might Andreas Pereira be rewarded for a fine performance against Colchester? Do Juan Mata or Jesse Lingard have the key to unlock an inevitably stubborn, organised and deep-lying defence instead?

United must be wary not to underestimate the threat of the opponent. Watford gave Liverpool a scare at Anfield, squandering more than their fair share of chances and falling to two ruthless finishes from a world-class game-changer. Nigel Pearson deserved more from his Premier League return.

And while Watford might take the game to United at home, thus playing into their hands, the visitors have to be alert. Troy Deeney will be all elbows, Gerard Deulofeu is due one of his five sensational games a season and Ismaila Sarr will need to be stopped.

This week’s Mailbox has both predicted defeat on Sunday and damned Harry Maguire. It will be interesting to see how he and they respond to the challenge.

Football League game to watch – Middlesbrough v Stoke
When Middlesbrough beat Stoke 1-0 in April, few could have expected what paths they would follow thereafter. The win put Boro in the final play-off position with three games remaining, as Tony Pulis looked primed to deliver promotion. The defeat left Stoke 16th, but safely ensconced in mid-table and destined for better things under the newly appointed and progressive Nathan Jones.

On Friday evening, Jonathan Woodgate will be searching for only his fifth win as a manager, while Michael O’Neill continues in his efforts to rescue the freefalling Potters. Can the side in 22nd draw level on points with the team in 20th by securing only a fourth Championship away win since November 2018?

World game to watch – Liverpool v Flamengo
For Liverpool, it bears repeating: ‘If they will try to trademark the literal name of their own football club, you best believe they will milk victory in a competition they have never won for more than it’s worth.’

The Reds have never been able to irrefutably call themselves the world’s best team. Logic dictates that they would have been as such at some stage but the official title has always remained out of reach. Not under Bill Shankly, Bob Paisley, Joe Fagan, Kenny Dalglish, Rafael Benitez or even Roy Hodgson have they lifted any iteration of this trophy.

So Jurgen Klopp knows the value in taking Flamengo as seriously as possible on Saturday. A bruising meeting with Monterrey ensured that South America’s champions will not be underestimated. Jordan Henderson will not play at centre-half. Adam Lallana will not play at all.

Klopp, within reason, will field a full-strength team, even with Leicester on the horizon five days later. Neither he nor his players will want this to have been a wasted journey. Passing through customs with silver medals draped around their necks and giant bars of Toblerone in their hand luggage will not be entertained as an option.