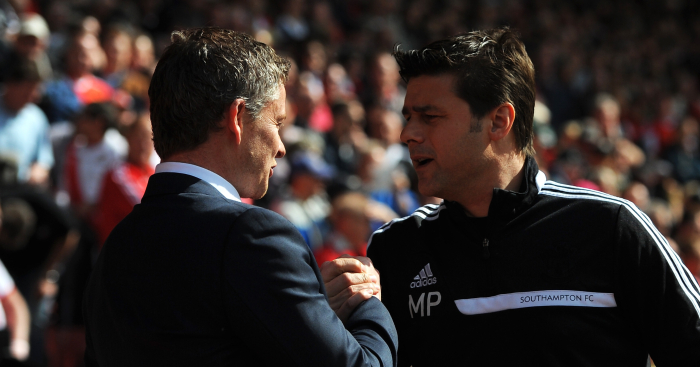 Game to watch – Tottenham v Manchester United
The more things change, the more they…actually, really have pretty much completely transformed. “You saw that Cardiff were defending with nine men behind the ball and it’s really difficult to break that wall when they are defending so close to their own goal,” said Mauricio Pochettino in April 2014.

The Southampton manager would add that he “fully respects” the overly defensive approach of one Ole Gunnar Solskjaer, who had masterminded a 1-0 victory at St Mary’s. Until last month, that was his only away win as a Premier League manager.

Their second meeting could follow a similar pattern, albeit on a much grander scale. Their roles are certainly the same: Pochettino will again be the gracious host, with Solskjaer cast as the underdog.

He could take heart from that victory almost five years ago. Cardiff had six shots to Southampton’s 19, and 32 per cent of the possession. It proved that devising a game plan based purely on defending and counter-attacking was not beyond the Norwegian, even before anyone knew such doubts existed.

If Manchester United are to escape from Wembley with an equally positive result on Sunday, Solskjaer will have to display an even greater level of tactical acumen. Many expect Tottenham to suffer a collective stitch at some point, yet they are maintaining their pace just behind Liverpool and Manchester City as the darkest of title-race horses. They are the deserved favourites against Europe’s form team.

Opening fixtures against Cardiff, Bournemouth, Huddersfield, Newcastle and Reading have been kind to Solskjaer, allowing him to cultivate a reputation as an attack-minded coach. They have scored at least two goals in five consecutive games for the first time since April 2008, and previously encumbered players look to be enjoying themselves much more.

This is a chance for United to restore some pride, much of which was shattered in the 3-0 reverse at Old Trafford in August. It was a scoreline so damaging that Jose Mourinho used it to remind everyone of how many Premier League titles he had won, and a performance so damning that the Portuguese used it to point out how “from the tactical point of view we didn’t lose”.

For Solskjaer too, this is an opportunity to emerge from the pack of candidates as a genuine contender to be appointed on a permanent basis this summer. Victory over Tottenham would make his credentials difficult to ignore; even a draw boosts his reputation considerably.

As for Pochettino, the possibility of exacting a measure of revenge on his counterpart matters little. Instead, the prospect of becoming the first Tottenham manager since 1990 to complete a league double over United is tantalising. After months of flat-batting questions over a move to Old Trafford, he can issue the most emphatic statement imaginable by ending their recent renaissance.

Player to watch – Mesut Ozil
Not that you’d know, but Arsenal have been struggling with injuries lately. It speaks volumes of the general predictability of Premier League managers that Unai Emery’s decision not to use it as an excuse feels somewhat refreshing.

The defenders will have been welcomed back with arms as open as the gaps between a central defensive trio of Stephan Lichtsteiner, Koscielny and Granit Xhaka. Arsenal have conceded 11 goals in their last five Premier League games, keeping just one clean sheet since the start of October. The blame for that can be apportioned between injuries and lingering systemic issues.

But the return of Ozil has hardly merited celebration. The German’s scarce availability this season has drastically diminished his stock in north London. For many, he is now more burden than brilliant, his wage hanging around the club’s neck like a millstone.

David Ornstein noted a little over a week ago that ‘some in the Arsenal hierarchy regret the Ozil contract’. It has been cited as the reason why Aaron Ramsey has been allowed to leave for Juventus, and why there are no funds available for transfers this month. Ozil has faced criticism for both situations.

Much of it has been undue as ever, but there is an element of truth to it. Since signing that contract 12 months ago, Ozil has missed more Premier League games through injury (8) than he has combined goals and assists (6). Be it from the bench or the start, he needs to prove he has a place in Arsenal’s long-term future.

Manager to watch – Claudio Ranieri
Fulham acted quickly, decisively and, by all accounts, appropriately. Sitting bottom after 12 games was never part of the plan for a side who spent so frivolously in the summer, and so Slavisa Jokanovic had to go.

They were in 20th, three points from safety when the Serb was replaced ruthlessly and instantly by Claudio Ranieri. Nine games later they are 19th, but that gap is four points.

This has been more of a new-manager stumble than a bounce. Fulham are actually 15th in a form table since Ranieri’s appointment, earning more points than in fewer games under Jokanovic. Yet they are further from salvation, mired in deeper relegation troubles.

Ranieri is even starting to sound a little more desperate, as if he underestimated the task at hand. “I have to promise something more,” he said at his first press conference. “Pizza is not enough now. I don’t know. Let me think. It’s better everybody to McDonald’s.”

His most recent message was rather less jovial, and far more solemn. “I think we have to bring somebody in to survive,” he said earlier this week. “I need somebody who can help us; I need somebody.”

For now, he must source that inspiration from a squad that continues to under-perform. He has to find goals in a group that has not scored more than once in each of their last nine games. He needs to establish defensive resilience in a side that has kept two clean sheets in 21 matches.

Fulham’s only wins this season have come against the teams currently in 16th, 18th and 20th; they are top of a bottom six mini-table. The lack of new signings would be no excuse for not beating Burnley at Turf Moor on Saturday.

Team to watch – Liverpool
It might take just eight words to inspire Liverpool out of this most shallow of ruts. ‘They are still without a win this year,’ read the final paragraph to a piece in the nation’s best-selling newspaper, magnifying a narrow defeat to the reigning Premier League champions and a similarly close FA Cup loss with a far from full-strength team beyond all meaning.

If this is Liverpool’s crisis, helplines will hardly be inundated. They have a four-point lead atop the Premier League table, and can look forward to Champions League football next month. Jurgen Klopp opted not to allocate all his eggs between three baskets, choosing instead to split them between just two.

It is a gamble that can only truly be judged in hindsight. If Liverpool either end their 29-year wait for a top-flight title or lift that famous European trophy for a sixth time come May, it will be seen as one of Klopp’s most important decisions. Liverpool do not boast the same luxury as Manchester City in terms of squad depth, and so must rid themselves of any potential distractions.

But if the Reds have inadvertently consigned themselves to a seventh successive trophyless season, Klopp would deservedly face his most intense line of questioning yet. Whether deprioritising the FA Cup has actually harmed momentum or fostered a losing mentality, it will be forever be known as Liverpool’s Asprilla moment if they spurn this opportunity.

It feels like an age since that defeat to Manchester City, in part due to the subsequent tiresome debates over grass length, alternative camera angles of goal lines and talk of fortune. But there needs to be a response away at Brighton, who are on the Premier League’s joint second-longest unbeaten run at a gargantuan three games.

Liverpool’s last league defeat preceded a 21-game unbeaten run. The last time they lost two consecutive games in all competitions was in May, when they followed losses to Roma and Chelsea with a 4-0 win over Brighton, as it just so happens. How they would welcome a similar outcome.

With Manchester City having rather emphatically overcome their own blip, Liverpool must hope theirs is just as brief.

Football League game to watch – Sunderland v Luton
Sure, the Championship looks bloody fun this week. Leeds (1st) host Derby (6th) on Friday night before Norwich (2nd) travel to West Brom (4th) less than 24 hours later. But League One is, at the very least, in the near vicinity of where it is at.

Winter has not yet passed, never mind spring or fall, and Nathan Jones has already been gone too long. His departure for the vacant managerial post at Stoke has added an extra layer to this onion of a match, potentially derailing a promising promotion push.

Luton are second in the table and unbeaten in 13 games. But they cannot quite pull clear of a resurgent Sunderland, who are one point behind and show no signs of slowing up. The only team to beat them in their last 17 league games are leaders Portsmouth, and 20-year-old Josh Maja is the division’s second top scorer.

These two sides drew 1-1 when they met in the second game of the season. Luton (49) are League One’s top scorers, with Sunderland (46) joint-second. Both clubs have conceded the same number of goals (24). Sunderland are unbeaten at home, and Luton have won four of their last six away. The margins are as fine as can be.

European game to watch – Sporting v Porto
While most European leagues have conceded that the ravages of weather will inevitably and painfully consume them if they do not make certain provisions, Portugal stand firm and scoff in the face of a bit of wind and rain. A rather entertaining Primeira Liga continues unabated.

Porto will be thankful. Sérgio Conceição has overseen a club record 18 wins in all competitions since defeat to Benfica on October 7. They enjoy a five-point gap at the top of the league, are in the quarter-finals of the Taça de Portugal, the semi-finals of the Taça da Liga, and have reached the Champions League knock-out stages as winners of their group. The last team to beat them in Europe were Liverpool in February.

Things are certainly going swimmingly. But a visit to fourth-placed Sporting provides no room for complacency. Marcel Keizer’s side have not been quite as dominant, yet join Porto in domestic quarter and semi-finals, having booked a place in the Europa League last 16.

Most pertinently, their home form has been imperious. Sporting have won all eight of their league games at Estádio José Alvalade this season, dropping two points at home since December 2017. Their last league defeat on their own patch was in May of that year.

Be it Porto’s record winning run or Sporting’s remarkable home record: one must fall on Saturday. How very exciting.