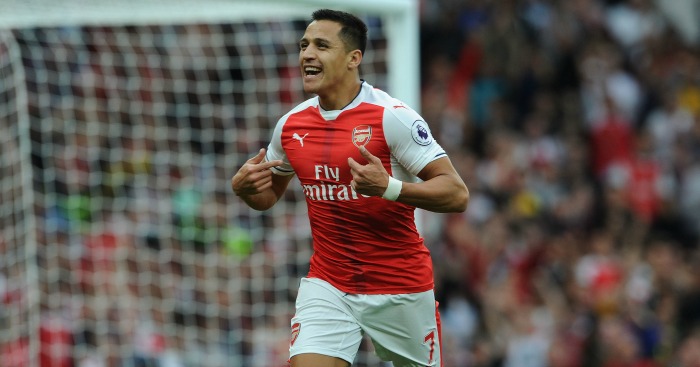 The thing is, you don’t need to hear about all that, because you were never going to miss this game anyway. And why? Because the bloody Premier League is back after two long, barren weeks. Thank you, blanket football coverage football. Thank you. Don’t ever catch us saying nasty things about you again.

Player to watch – Alexis Sanchez
With Olivier Giroud already ruled out of this weekend’s game at home to Swansea and Lucas Perez’s last league minutes coming during injury time in the 4-1 win at Hull almost a month ago, Arsene Wenger will again turn to Alexis Sanchez to lead the line. There’s nothing wrong with that, of course; Sanchez has been excellent during Arsenal’s fine recent run of form. But it does again raise that question of just how much football the Chilean can play before his muscles refuse to play ball.

Sanchez was given a rest against Southampton in September (although required to come on with the game heading for a draw), but played 180 minutes for Chile during the international break, including the full game against Ecuador at altitude in Quito. With the victory in Peru only taking place in the early hours of Wednesday morning, Sanchez could not return to training until Friday at the earliest.

With Hector Bellerin and Mesut Ozil both suffering injury scares during the international break and Arsenal facing seven games in 23 days before the next international break, Sanchez is one of a number of players who could really do with a rest. Does Wenger ask his first-choice forward – for that surely is the status now afforded to Sanchez – for another push straight after flying in from South America?

Team to watch – West Ham
Because some people just want to watch the world burn. And by that I mean watch West Ham try and defend proficiently away from home against Christian Benteke, Andros Townsend and Wilfried Zaha with a back line of Angelo Ogbonna at left-back, Alvaro Arbeloa at right-back and James Collins still plugging away in the middle. Strap in.

Manager to watch – Bob Bradley
Amid the fallout to Bob Bradley being given the chance to impress in the Premier League over Ryan Giggs, it’s worth remembering that there is a club standing closer to the edge of a cliff than supporters would like. Swansea prided themselves on sustainable improvement and development, but that seems to have been slightly lost since the departure of Garry Monk, albeit after a worrying decline in form.

Bradley’s first task is to ignite a significant improvement in a team that has taken 43 points from its last 41 league matches, relegation form by any measure. But he also needs to try and recapture a distinct identity at Swansea that dissipated during the quick-fix reign of Francesco Guidolin. The Liberty is not in doubt, but the equality and fraternity are lacking.

Bradley must also achieve all this with Guidolin’s signings, which only adds to the American’s issues. Add in the mood, however hyperbolic, that Swansea’s new manager is defending ‘the foreigns’ against an ex-player brigade and you have more than a few reasons to keep one eye on events at the Emirates on Saturday afternoon.

One-on-one battle to watch – Romelu Lukaku vs John Stones
Most of this summer was spent by Everton supporters wondering how many of the club’s stars would leave the club, bridges burnt by the last months of Roberto Martinez. However, had you offered them Ashley Williams, £35m and Romelu Lukaku staying in exchange for John Stones leaving, they’d have probably a) questioned how you had so much power over fate, and b) taken you up on your offer.

Money did buy them Stones, eventually, and the new rising star of England’s defence will be keen to impress against his former club following a difficult international break. In Lukaku he faces a striker who he knows well, but one who will be also aware of Stones’ flaws.

The Belgian’s partnership with Yannick Bolasie, who has been told to get closer to the lone striker, is likely to be the key to Everton’s success against City. Everton must look to turn over the ball quickly (as Celtic and Tottenham have done recently), before releasing Bolasie and getting Lukaku into dangerous areas.

In the last two days alone we’ve heard how Pep Guardiola is moulding Stones into the ‘complete defender’ (Daily Mail) and how Stones will win 100 England caps (Gary Cahill), but he still hasn’t ironed out the flaws that many are willfully choosing to ignore. Another test, against a familiar face, awaits.

The fear of being beaten up by your boss aside, there are plenty of reasons to write about the Championship’s surprise club. Some of us (shameless) saw the potential for very nice things as far back as January, but nobody predicted that Huddersfield would sit top of the table in October, three points ahead of Newcastle and seven inside the play-off places.

It has not been an easy international break for Huddersfield, with worries first that their manager would leave for Derby County and then for Aston Villa, but those fears were misplaced. Wagner announced that he would not be leaving West Yorkshire. The dream is still alive.

This Sunday sees the Sky cameras roll into Huddersfield to record the show, a Yorkshire derby between the surprise package and one of a number of surprise underachievers. Carlos Carvahal’s Sheffield Wednesday reached the play-off final in May, but a bloated squad currently sits in ninth.

It may not last, but there is something very unusual about Huddersfield’s attempts at improvement and, in a league in which the same old managers seems to do the same old things, that’s incredibly endearing. They’ve got Jurgen Klopp’s former No. 2, have recruited four Germans, a Croatian, a Dutch winger and a Slovakian centre-back from Borussia Dortmund, signed one of the brightest prospects in the Football League in Jack Payne and have fine young talent on loan from Liverpool, Manchester City and Chelsea. Only one player to have started more than three of their 11 league games is older than 27, and five are under 25.

European game to watch – Melbourne Victory v Melbourne City
Yeah, I’ve cocked this up in the naming of this section, but I’m happy to stick two fingers up at the cartographers out there by pretending that Australia is in Europe. In tough times we all need to come together, or some other pithy b*llocks.

The Australian A-League is a deeply wonderful thing. The sun always shines, the football is watchable, the atmosphere is great and the whole thing is streamed to the UK just in time to cuddle you through a Friday, Saturday or Sunday morning hangover. The season started last week, and that means a whole load more televised football to watch; this weekend has five games on, all before 11am.

This week’s biggest game is undoubtedly the Melbourne derby, with both City and Victory getting to the end-of-season playoffs last season, although neither made the final. If that wasn’t enough, you can watch Tim Cahill play alongside former Birmingham, Leeds and Preston midfielder Neil Kilkenny.

Punt of the week – Christian Benteke to score anytime
Sometimes these bets contain a long-winded explanation. Sometimes they include flimsy evidence in which I’m even trying to persuade myself that I know what I’m talking about. Often they just include the words ‘Romelu’ and ‘Lukaku’. This week is just as simple.

Benteke has scored in his last two games for Crystal Palace and scored a hat-trick for Belgium during the international break. Gibraltar might not be any great shakes defensively, but West Ham aren’t exactly performing an extended tribute to Bobby Moore right now either. Benteke is priced with Bwin at 8/5 to score at any time in Saturday’s late televised game, and 9/2 to score first. I like both. A lot.

Where is Mike Dean?
He’s down at Southampton vs Burnley, and the reason for that is obvious. People are already deliriously happy to see the return of the Premier League, so there is no need to give them added excitement on Saturday. Instead, keep your powder dry and keep the excitement levels high by holding back Dean-o until Sunday’s late game. ‘Why is he not at Anfield for Liverpool vs Manchester United on Monday?’ I hear you ask. Dark forces.

@CelebrityRefs 10/10 for the euro ref boy band act. Note the cameo by the 6th referee pic.twitter.com/TojUlctxHN