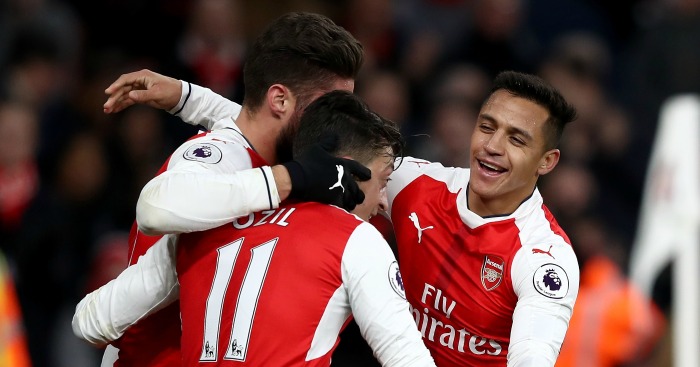 Game to watch – Manchester United v Tottenham
All eyes will be on Old Trafford on Sunday, and not just because Eric Dier will be expected to back up the ominous warning he issued to Ander Herrera in November. This is sixth versus fifth, Mourinho versus Pochettino, and a fixture between two sides yet to feel truly comfortable in their own skin this season.

The consequences of a defeat for either would be far-reaching. Scoring eight goals in their last two matches suggests Tottenham have recovered from a run of form which saw them win just one game in ten, but the north Londoners had moments of uncertainty against an abysmal CSKA Moscow side in midweek. Pochettino named a stronger team for that dead rubber than for the preceding game against Monaco when qualification was still possible. The Argentinean is all too aware of the importance of building confidence, but a negative result at Old Trafford would derail a train which has already suffered too many delays this season.

The fear for United is that Mourinho approaches this game as he does any other against an elite rival: Avoid defeat first, then ask questions. With no home league win since September, that will no longer wash. The manager can claim bad luck and preach the importance of performances over results – and it is clear they are improving – but they are in danger of losing too much ground. Already 13 points behind leaders Chelsea and nine behind fourth-placed Manchester City, they must first begin to close the six-point gap on Tottenham in fifth. A draw here is not enough in any circumstance.

And yet it looks the most predictable result. United’s last three Premier League fixtures have ended 1-1, while no side has drawn more than their six in 14 games. Only two sides have drawn as many: Middlesbrough and, of course, Tottenham. The smart money is on a stalemate.

The hope is that both managers realise a share of the spoils here would be a hindrance, and that they allow the players to express themselves a little more. In Zlatan Ibrahimovic, Henrikh Mkhitaryan, Juan Mata and Paul Pogba, United have more than enough talent to punish any side. In Harry Kane, Dele Alli, Son Heung-min and Christian Eriksen, so do Tottenham. They just need to be trusted to prove it in a must-win game.

If anything, this provides a chance for either side to finally establish some form of superiority over the other. One place and six points separate them this season; the gap was two places and four points last season, one place and six points the season before that, and one place and five points in 2013/14. Of their last eight meetings, Tottenham have won three and United have won two. The other three ended in draws. It is a result neither side can afford on Sunday.

Player to watch – Kelechi Iheanacho
“He was the only striker we had in that moment,” said Pep Guardiola in September, explaining why he chose Kelechi Iheanacho in his starting line-up in the derby victory over Manchester United. It was the obvious explanation, and the reason why the manager will surely entrust the Nigerian once more in the coming weeks.

Just as Iheanacho’s first chance under Guardiola came as a result of Sergio Aguero’s mindlessness, the forward will again have a chance to state his case during the Argentinean’s latest suspension, starting with a game against struggling Leicester on Saturday. The Foxes have conceded 14 goals in their last six games, have kept just three clean sheets in the Premier League, and were treated to a 5-0 tarting by Porto in midweek.

Manchester City will be justifiably irritated with Aguero, who allowed his frustrations to get the better of him against Chelsea. But Iheanacho has proven an adept replacement when given the opportunity. With Aguero sidelined against Manchester United and Bournemouth in September, Iheanacho rose to the occasion, scoring and assisting a goal in both games.

The 20-year-old has scored or assisted a goal every 71 minutes in the Premier League this season, struck against Celtic in the Champions League in midweek, and has 19 goals in 18 starts for City. Wes Morgan and Robert Huth will be relieved to avoid spending an afternoon chasing Aguero’s shadow, but his deputy is more than capable of filling those shooting boots.

Team to watch – Arsenal
Had Arsene Wenger been offered a November in which Arsenal’s only defeat resulted in their exit from the EFL Cup, the Frenchman would have insisted he did not see the controversial incident that had happened mere metres away, then thanked you for your hospitality before accepting such a deal. The Gunners have emerged from their supposedly cursed month top of their Champions League group and second in the Premier League, just three points behind Chelsea.

Combine that with the fact that Alexis Sanchez and Mesut Ozil are producing sweet, sweet, lovely football on a regular basis to soothe the pain of their contract wranglings, and Arsenal can fully expect a fourth win in five games on Saturday. Stoke will be as stern a test as ever – their recent return to form lifting them into the familiarity of ninth place – but Arsenal are the clear favourites here.

Will Hector Bellerin make his long-awaited return to cure the current right-back issue? Will Granit Xhaka, Mohamed Elneny or Ramsey partner Francis Coquelin in central midfield? Will Lucas Perez be rewarded for his Champions League hat-trick with some extended playing time? Which of his dogs will Sanchez dedicate his latest hat-trick to?

Manager to watch – Alan Pardew
The cat that got not only the cream, but also a bath of milk, a salmon supper and a scratch behind the ear, all before curling up in front of the fireplace after dragging the corpse of a dead bird into the living room. As laboured as the metaphor is, the point remains the same: The King is back.

Alan Pardew wasted barely any time in being Alan Pardew after Crystal Palace secured a 3-0 win over Southampton last week. “We have a lot of serious investors at the club who perhaps don’t know a lot about football,” he said, “so the chairman has been defending me this week.”

“It’s hard to dress up six defeats when you are the owner of a club where you have investors,” he would add, ensuring that the rod he had just made for his own back was firmly out of sight. Because if Palace follow up a supposedly job-saving victory with anything less than a win over Hull on Saturday, then Pardew is not back to square one, but behind where he started in the first place.

As vital as beating Southampton was, the subsequent fixture has now taken on even greater importance. A win for Hull would put the two sides level on points, and the spring in Pardew’s step would be forgotten as he trips over his ego and, potentially, through the Selhurst Park exit.

One-on-one battle to watch – Loris Karius v Andy Carroll
If Bournemouth centre-half Steve Cook can score one goal and play a vital part in another by targeting Loris Karius, then West Ham striker Andy Carroll can be expected to do the same when they travel to Liverpool on Sunday.

“We did target him as a weakness in the Liverpool side,” said Cook earlier this week, having helped Bournemouth to an historic 4-3 win. “We felt that he was under a lot of pressure. We did target him.” It was not the most subtle tactic, but it worked. The German has not looked comfortable since moving to the Premier League in the summer, and his nadir came in a nervous performance at the Vitality Stadium.

There is never a good time to face Carroll, but this might be the very worst time for a goalkeeper so short of confidence. The 27-year-old returned from injury to score within a minute of his introduction against Arsenal, and he has the added incentive of silencing his former fans at Anfield. Liverpool’s mask slipped against Bournemouth as Karius’ difficult transition continues, and a motivated Carroll is capable of exposing the problems further. The Reds will pray that Joel Matip is available, but even he can only do so much.

European game to watch – Torino v Juventus
Picture the scene: It is just before 3pm in Italy, and the Turin derby is mere moments away. The players from both teams are gathered in the tunnel at the Stadio Olimpico Grande Torino. Each individual is focused, concentrated. The tension is palpable, with Juventus hoping to extend their lead at the top of Serie A, while Torino are determined to keep their European aspirations alive.

A solitary voice pierces the air of nervous silence. “Muovere la f***ing palla,” shouts Joe Hart, imploring his teammates to keep the f***ing ball. He is pumped up. He is motivated. He is ready. He is prepared for his first derby in Italian football.

Torino have not lost at home in the league all season. Only two sides have procured more points away after 15 games than Juventus. Something has to give. Unless it’s a draw, then nothing gives at all. So something might give, but there is every chance it will not.

Punt of the week – Manchester United and Tottenham to draw 1-1 at 6/1
Here, I’ll show you my working out for an extra mark:

Where is Mike Dean this week?
Clearly satisfied with the fact that Manchester City’s meeting with Chelsea last week passed by without incident, red cards or a 20-man melee, the Premier League have rewarded Mike Dean for serving as fourth official in that game by handing him the refereeing reigns as leaders Chelsea host West Brom.

But midweek fixtures mean a double dosage of Dean. He will be fourth official at Goodison Park, gracing both Everton and Arsenal with his presence on Tuesday. More of this, please.

Take a moment to enjoy the utter contempt shown by the Dean in yesterday's City/Chelsea melee:#CelebrityRefspic.twitter.com/h9hSL7K2pz