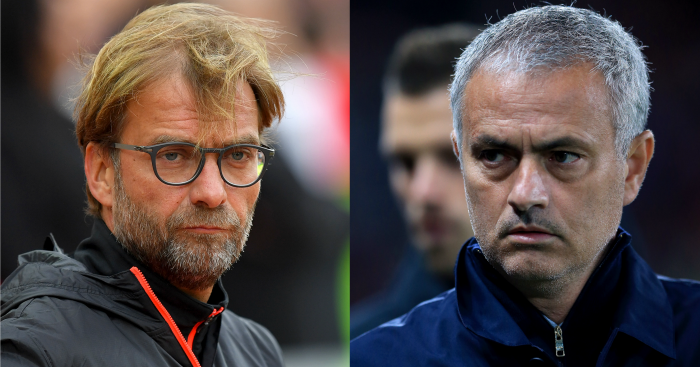 Game to watch – Manchester United vs Liverpool
How quickly things can turn. From riding the crest of a Jurgen Klopp wave, Thursday morning’s Mailbox was full of Liverpool supporters worried about their side’s form. Three games without victory in three competitions, a midfield that looked rotten against Southampton and key absentees exposing flimsy back-up options.

Sometimes a crunch fixture is the best way to engineer a response, but it doesn’t quite feel that way with Liverpool’s trip to Manchester United. Supporters are left in the uncomfortable position of desperately hoping for the return of Jordan Henderson. Klopp’s biggest issue is that any midfield absentee forces the selection of Emre Can or Lucas Leiva – one is out of form and the other was expected to leave this month. More lounge music than heavy metal.

By contrast, with Paul Pogba passing expansively and surging forward, Michael Carrick as the metronome and Ander Herrera as the roving reporter, United’s midfield looks extremely balanced. This is the 4-3-3 we were crying out for in September and October, and it’s proving damn effective.

Pogba and Herrera’s energy and stamina forces opposition central midfielders to stay close to them, meaning wide players must sit deep to protect their full-backs and avoid Anthony Martial, Henrikh Mkhitaryan, Marcus Rashford or Juan Mata creating an easy one-on-one with the defender every time they get the ball on the wing. That in turn forces the opposition to be camped in their own half and leaves the forwards isolated, allowing United to dominate territory in their home games. Against Middlesbrough, Alvaro Negredo had just six touches in the final third of the pitch. Against Sunderland, Jermain Defoe had nine.

It’s a whacking great cliché but these games are so often won in midfield: the team who copes best with the increased pressure when in possession and forces mistakes from the opposition, dominates the match. On the evidence of the last ten days and the players potentially unavailable to both managers, there is only one winner.

We will have 16 Conclusions on Manchester United vs Liverpool, obviously.

Player to watch – Alexis Sanchez
Arsenal may have announced three new contract extensions on Thursday, but the lull over Alexis Sanchez’s possible new deal has died down a touch. That’s good news for those of us bored rigid by the constant ‘will he, won’t he’ discussion when the obvious answer is that nobody really knows, but bad news for Arsenal supporters. The longer it carries on, the less likely Sanchez is to stay.

What has commenced is the examination of Sanchez’s body language by relative amateurs, as if to gain some insight into his decision-making process. So when the Chilean throws his gloves to the floor in frustration at dropped points, it’s a message to Arsene Wenger that he isn’t happy. When he plays badly, he is ‘disinterested’, and when he plays well he’s ‘showing his worth to Arsenal’. This is the parlance of the transfer window.

With Sanchez enjoying a rare weekend off during the FA Cup third round, he will be refreshed and ready to carry Arsenal’s title hopes once again against Swansea. With Arsenal having suffered two defeats and a draw in their last three away games, look out for more potential huffing and puffing from Wenger’s most valuable asset.

Team to watch – Chelsea
In the business world (a world that I admittedly know close to sod all about), there is a principle called the ‘just right’ reaction. The theory is that everyone cocks up from time to time, so how you respond to that mistake shapes your reputation far more than the initial mistake. Similar mistakes are committed across the board, but reactions are far more diverse.

Act ‘too hot’, making wholesale changes as a response to adversity, and the mistake can be amplified. Act ‘too cold’, assuming that nothing needs to be learned from the setback, and the same can occur. Act ‘just right’, analysing possible causes of the setback and solutions, and you can actually be stronger than before the setback occurred.

It’s on that general theme that Antonio Conte will have worked with his Chelsea squad following the defeat to Tottenham, when they were outplayed by their London rivals. Conte will have been buoyed by Chelsea’s magnificent run, but concerned by the form of their peers. The lead is only five points, despite the joint-longest winning run in Premier League history.

One option for Conte is to dip into the transfer market, with rumoured interest in Michail Antonio, Ben Gibson and Fernando Llorente. Another is to tweak his team to face Leicester on Saturday teatime. Will Cesc Fabregas and Willian return to the team?

Conte will be only too aware of how easy it is for a title bid to come unstuck by getting into a rut. Defeats are inevitable, but immediate responses to those defeats vital. The question is whether Chelsea can make amends for White Hart Lane defeat at the first time of asking.

Manager to watch – Sam Allardyce
A difficult start to life at Crystal Palace manager, and a surprise for those who saw Sam Allardyce as a survival fairy godmother, waving her wand over the likes of Martin Kelly and turning them into competent Premier League players. Still, at least Stewart Downing might be coming in to solve the problem of Palace only having six players who can play on the wing.

Allardyce is hardly in any trouble, but knows how vital it is that he addresses the slump that Alan Pardew engineered – a run of league form that has seen Palace take 27 points from their last 39 league games – on an ASAP basis. After all, there is no better away trip in the Premier League than the London Stadium and Allardyce’s former club West Ham, the lowest home scorers in the division. And they won’t even face Dimitri Payet.

Having started 19 players in his four matches in charge, Allardyce should finally be getting to grips with the haves and have-nots in his squad. Without Wilfried Zaha and with Christian Benteke chronically out of form, Palace’s manager must find an answer to the club’s abject results. Having stopped the flow of goals, Palace are now struggling to score them.

One-on-one battle to watch – Romelu Lukaku vs John Stones
I know I am a parody of a man, but there really is reason to look out for Lukaku this week. The Everton striker is on a run of five goals in six club games, but is still struggling for meaningful support. Every one of Gerard Deulofeu, Kevin Mirallas, Ross Barkley and Tom Cleverley have disappointed to varying degrees this season; those four share 34 league starts. The arrival of Ishak Belfodil could finally provide Lukaku with a friend in the penalty area.

This weekend, Lukaku faces old friend John Stones, about whom he presumably knows plenty. Having scored a wonderful solo goal in the reverse fixture, Pep Guardiola will be keen to cut off the supply to Lukaku at source, and stop him running directly at a central defence that is still prone to collapse. Without Vincent Kompany, Stones may be asked to pick up Lukaku at set-pieces too. Concentration will be vital.

For Stones’ part, he needs a run of fine form in City’s team. Guardiola’s side have lost five of the 22 games he’s started this season but only one of the ten games without him, and have conceded more goals per game with him in the starting line-up. Time to address those statistics.

Football League game to watch – Leeds United vs Derby County
A Brian Clough derby, and a fixture that we can confidently label as a ‘proper’ Championship match. After periods of mismanagement and ill-advised ownership, sinking ships are now both back on an even keel and harbouring promotion pushes. I don’t know why I’ve started with nautical references.

At Leeds, Garry Monk is performing magnificently under significant pressure. Having lost his dream job at Swansea, Monk has regrouped and come back stronger. Their last 12 Championship matches have returned nine wins and only two defeats – to Brighton and Newcastle. Continue that run and a play-off spot will be the minimum achievement.

Talk of regrouping after failure brings us to Steve McClaren, back at Derby after humiliation at Newcastle United. There were nervous glances when Mel Morris re-hired McClaren following Nigel Pearson’s brief tenure, but Schexy Schteve has lost only two of his 14 league games in charge. Derby have suffered a slight dip over the last few weeks – draws vs Fulham and Wigan, defeat to Norwich – but are within two points of the top six. Expect blood, thunder, Don Goodman’s commentary, a raucous atmosphere and a 1-1 draw.

European game to watch – Sevilla vs Real Madrid
It can be a difficult lot being Real Madrid manager: lose and it’s a disaster, win and the players did it. Fail to win La Liga or the Champions League and expect to be packing your things into a cardboard box and having a heavy-handed security guard escort you out of the building.

Take Zinedine Zidane, for instance. On Thursday evening Real set a new Spanish record of 40 games unbeaten. That run has spanned two seasons, 30 wins, ten draws and 115 goals. Zidane’s team are top of La Liga with a game in hand and five points ahead of a Barcelona team which contains at least four of the top ten players in the world. Yet if Real were knocked out of the Champions League by Napoli, or in the quarter-finals by any other team left in the competition, Zidane’s job would be in jeopardy. It’s a tough gig.

Zidane is also dealing with the insinuation from some that he is achieving despite his managerial acumen, rather than because of it. There might be a strand of truth to that, but it’s an uncharitable assessment of the longest unbeaten run in Europe. Real have not always won games through supreme skill and have regularly scored late winners and equalisers, but the results stay as consistent as ever.

This Sunday, Real Madrid travel to Estadio Ramón Sánchez Pizjuán for the second time in four days, Zidane’s 57th game as Real Madrid manager. He has lost only two. Time to cut him some slack.

Where is Mike Dean this week?
It’s Sunderland vs Stoke this week for our intrepid hero. We’re a little bit uncomfortable with the personal abuse that Dean has been receiving of late, so this is a plea: Remember kids, there’s plenty enough in his refereeing incompetence to go at without being cruel.

As an aside, Saturday sees Dean overseeing Ryan Shawcross’ penalty box shenanigans. The odds of 9/1 on Sunderland scoring a penalty are making my heart flutter.