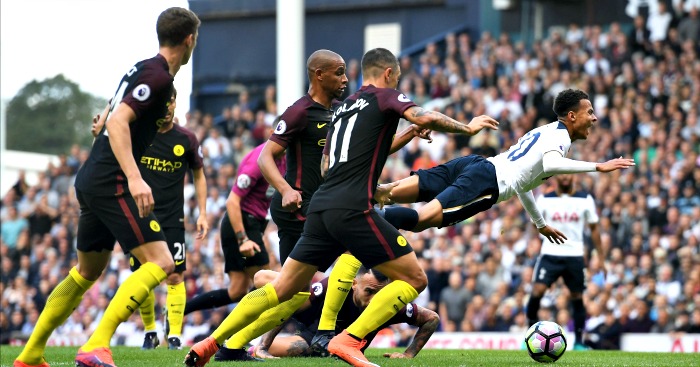 “Last season every team was inconsistent. This season the teams at the top are incredibly strong. At White Hart Lane against Tottenham, they were much better but in the other games, I don’t feel the opponents have been much better. In football, like in basketball and tennis, you have to put the ball inside the net and to stop the opponent from doing that. You have to find a balance between how you create and how you defend; then it is much easier for the players.”

The Spaniard has presumably spent most of this week cursing the television and tearing his non-existent hair out while watching Andy Murray, Rafael Nadal and Roger Federer clear the net with infuriating repetition at the Australian Open, but he has hopefully reserved a couple of minutes here and there to examine the wreckage of City’s latest embarrassment. He might feel his club have faced tougher opposition, but the 4-0 defeat to Everton on Sunday was as emphatic as they come – it is his heaviest ever loss as a league manager.

A meeting with Tottenham, who so thoroughly outplayed the then-unbeaten champions-elect in October, is likely to have been low on Guardiola’s list of preferences. An Aleksandar Kolarov own goal, a Dele Alli strike and a dominant performance from the hosts registered the first cracks in City and Guardiola’s aura of invincibility three months ago. Much of the damage since has been self-inflicted.

Where Victor Wanyama and Mousa Dembele will marshal Tottenham’s midfield at the Etihad Stadium, Guardiola must find a pairing that does not consist of a right-back, an ageing force and crossed fingers. Where Toby Alderweireld is thwarting attacks at one end and starting them at the other, Kolarov and John Stones will simply hope not to kick the ball into their own net. Where Dele Alli and Harry Kane are combining to devastating goalscoring effect, no Manchester City player has scored more than one goal in the league since December 3 – a span of eight games. Where Tottenham have won each of their last six Premier League games, scoring 19 goals and conceding just three, City have lost two of their last three. There is no doubt as to who is the form team – even though the gap in the table is just three places and three points.

As an aside, this is the fourth consecutive gameweek in which two members of the top six face each other. Barring those sodding international breaks, every week from Liverpool’s win over Manchester City on December 31 to the Reds’ fixture against Arsenal on March 4 will feature a game between two of Chelsea, Tottenham, Liverpool, Arsenal, Manchester City or Manchester United. One slip up at this stage could be cataclysmic in the race for the top four, never mind the title.

And it is for that reason that City will head into this game with more fear than their opponent. They have lost three of their six games against the rest of the top six – no other side has been defeated more often – and their only wins have come against Manchester United in September and Arsenal in December, both by one goal. The only two sides to take more points than Tottenham from the rest of the top six are Liverpool and Chelsea.

The odds are stacked in Tottenham’s favour, but just like Guardiola’s understanding of the basic rules of tennis, the odds are often wrong. Mauricio Pochettino’s side are perhaps more suited to being the underdogs in these games – they were against City in October and Chelsea earlier this month. They struggled in their defeat to Manchester United in December, and were beaten by Chelsea at Stamford Bridge when the two sides were on relatively equal footing. They have adapted excellently to playing the role of favourites against the Premier League’s middling teams; can they cope when a Hollywood actor is cast as the David to their Goliath?

Player to watch – Diego Costa
As far as parting shots go, the comment delivered by Antonio Conte to bring his training ground argument with Diego Costa to a close last week ranks highly. ‘Go to China,’ the Chelsea manager is reported to have said, presumably while Costa stormed up to his room, screamed that Conte ‘will never understand’ and slammed his door shut. Conte then sighed and poured another glass of wine as Costa started playing music at the loudest possible volume.

Costa, the petulant child, was grounded by Conte after his outburst over a back injury last week, with many suggesting that admiring glances from China had distracted the 28-year-old. Not that Chelsea noticed – Leicester were brushed aside in a 3-0 win. The row between player and manager had occurred at the worst possible time, with the defeat to Tottenham already threatening to push the Blues off course. But a weekend victory and a reconciliation maintains a seven-point gap at the top.

In truth, Chelsea would be able to cope against an albeit rejuvenated Hull on Sunday even without their top goalscorer. But Costa’s return to training and, subsequently, contention to start, ensures that harmony in the table-topping squad remains intact. If anyone doubted that Conte was il numero uno before this past week, they have since been silenced. Costa has had to fall in line, and must now show his worth to the side again.

Team to watch – West Ham
With one tap-in, one ridiculous overhead kick, one delightful finish and three points secured against an unpopular former manager, West Ham, in unison, raised its middle finger to one Dimitri Payet at the London Stadium. The 3-0 victory against Crystal Palace on Saturday was necessary in pushing further away from the relegation mire, but also in proving that this is a club united. From the manager to the players to the fans, the Hammers have been brought closer together by the events of the past week.

Andy Carroll got whiplash by scoring his bicycle kick and is a doubt for Boro on Saturday. You can't write this shit

Payet’s future will continue to dominate the headlines, but Slaven Bilic and his players might just prefer it that way. The story in east London before this month was of a club under-performing, a fanbase neglected, a stadium despised and a boardroom building a reputation for promising big and delivering Simone Zaza. Their star might want to return home, but that has simply renewed the energy, commitment and togetherness of those who remain to fight the cause.

With their FA Cup hopes thoroughly dashed by Manchester City and their League Cup aspirations already lost in the ether, only the Premier League remains for West Ham. A win over Middlesbrough could lift them 12 points clear of relegation; defeat could see cracks emerge in the foundations once more.

Paul Clement could hardly have planned the fixture list any better. If the new Swansea boss felt his side proved they can match the very best sides in the 4-0 defeat to Arsenal, the chance to prove they have learned their lesson comes against Liverpool on Saturday lunchtime.

In fairness to the 44-year-old, his assessment of his first Premier League game as a manager was accurate: Swansea restricted Arsenal to just one shot in the opening half-hour at the Liberty Stadium, while the Welsh side had four attempts on goal. There were already signs of improvement after his opening game ended in a 2-0 FA Cup defeat to Hull, and the eventual scoreline was harsh on the top-flight’s bottom club.

The game against Liverpool is no must-win – it is 20th visiting third, after all – but it is must-improve. Swansea face the Reds, Southampton, Manchester City, Leicester and Chelsea in their next five games, so now is the time for Clement to identify his best starting line-up and refine his tactics. The Welsh side have conceded three goals or more in 11 of their 21 league games so far this season. Avoiding another thorough tarting would be a good start.

One-on-one battle to watch – Joe Allen v Paul Pogba
A player who has spent most of the season winning midfield battles, providing goals and assists, who was his club’s marquee signing in the summer, whose hairstyle choices have become notorious in football media, and who transcends the very sport itself. Joe Allen has been a revelation for Stoke this campaign. And he will take on some bloke called Paul Pogba at the weekend.

Pogba has much to prove, his excellent displays in recent weeks being stricken from the record after a dire 90 minutes against Liverpool. In terms of providing chances from midfield, he will be in direct competition with Allen at the Britannia Stadium. The Welshman scored Stoke’s equaliser in the 1-1 draw at Old Trafford in October, and he hilariously remains the club’s top goalscorer this season, while only Charlie Adam has more assists. He upstaged Pogba at Euro 2016; he could do the same again here.

Even the most battle-worn Leeds fans are starting to believe in what Garry Monk is building at Elland Road. The 1-0 victory over Derby last week felt like a watershed moment, such was the convincing nature of their victory over a promotion rival. But Barnsley provide a different prospect, with Paul Heckingbottom’s team just eight points outside the play-offs. The stage is set, and Dean is the Hollywood director.

European game to watch – Juventus v Lazio
And you thought the Premier League title race was close. Juventus’ defeat to Fiorentina on Sunday means that just five points separate The Old Lady, still Serie A leaders, from fourth-placed Lazio. The gap to Atalanta in seventh is just ten points. So when Juventus manager Massimiliano Allegri – who, it should not be forgotten, spent all of the money on Gonzalo Higuain in the summer – lays the table to welcome Simone Inzaghi’s Lazio, he will do so in the knowledge that he cannot afford too many more bumps in the road. With a revitalised Ciro Immobile and a Felipe Anderson with both eyes on his form as opposed to at least one on a perennial Premier League move, the Biancocelesti are capable of securing a fourth consecutive victory.

Where is Mike Dean this week?
He’s the referee for Barnsley’s game against Leeds; can’t you f***ing read? Oh, and he wasn’t demoted. Stop being silly.