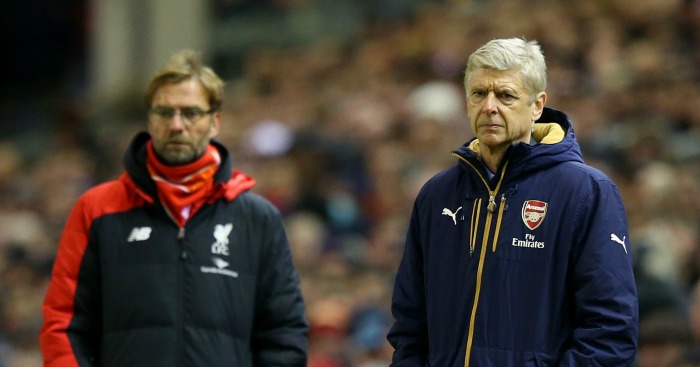 Game to watch – Arsenal vs Liverpool

Arsenal vs Liverpool has become something of a modern classic, a fixture that regularly produces moments and matches of remarkable quality and excitement. Since 2007 alone we have been treated to a 6-3, 4-4, 5-1, 4-2, 3-3 and two 4-1s.

It may be the first match of the season, but there is already plenty enough backstory to go round at the Emirates. Arsene Wenger faces a defensive crisis, with Gabriel Paulista and Per Mertesacker injured and Laurent Koscielny unfit. Having identified that a central defender was an urgent priority, Wenger failed to sign one in time.

The need for a striker is even more long-term, Wenger first mentioning the desire to provide support/an upgrade for Olivier Giroud in May. Since then, Arsenal been linked with about 24 different forwards from every corner of Europe. Not only have they not signed a striker, but Giroud is still not fit enough to start. That leaves Theo ‘positional fluidity’ Walcott to lead the line, unless Wenger chooses to use Alexis Sanchez as a false nine.

Wenger isn’t the only manager under pressure. Jurgen Klopp insists that there are no more excuses for Liverpool, no more transitional seasons, no more ‘next year could be our year’. The manager believes he has ‘his’ squad, and that means Liverpool must compete for a top-four place. Or else, really.

To do that, Liverpool must compete away from home at their likely rivals for that honour, which means improving their record against Arsenal. In the last 15 years, their away record reads: P 19, W 1, D 8, L 10. Liverpool’s return against the top seven team last season was a slightly miserable 14 points from 14 matches.

We cannot pretend to learn anything particularly long-lasting on the opening weekend – Aston Villa won away from home on the first day of 2015/16 – but the pressure from both media and supporters has never been greater. Lose at the Emirates on Sunday, and Klopp and Wenger will already begin to feel the heat.

We’re going to have to wait for a match fit Paul Pogba, so this weekend we’ll have to make do with a striker who scored 38 league goals last season and an attacking midfielder who contributed 26 goals and assists in 31 league games for a team that didn’t even win the title.

However, while Henrikh Mkhitaryan’s arrival has been slightly overshadowed, Ibrahimovic is nothing but box office. Surely in line to start after his Community Shield winner, Sunday lunchtime provides us with the first chance to watch a player most of us have waited years to see in the Premier League.

Capable of dropping deep and allowing Anthony Martial to fill the space left behind, Ibrahimovic’s selflessness as part of an attack is in sharp contrast to his own egomania away from the field. Manchester United fans may be desperate to see Marcus Rashford given time to impress – and he surely will be – but this weekend is all about a 6 ft 5 striker with 455 competitive career goals. I’m refusing to use the hashtag because I’m not a child, but welcome Zlatan.

Team to watch – Everton (vs Tottenham)

Ronald Koeman was appointed at Everton on June 14, so it’s of some discouragement that the manager admits his team are not yet ready for the start of the season.

“We are not at the level we need to be,” said Koeman. “In terms of the players and their physical state. I’d say we are 70 per cent of where we need to be from a physical point of view. We will improve. The squad will be 100 per cent in two or three weeks. But if I compare the physical state of the players in numbers here it is 70 per cent and at Southampton it was 100 per cent. It’s a big project. That project won’t be complete after two months, we need more time.”

Roberto Martinez takes much of the responsibility for those problems, criticised by Koeman for allowing the players to have six full weeks holiday. That tallies with reports from other clubs about the poor fitness of on-loan Everton players.

With the John Stones saga now over and Romelu Lukaku more and more likely to stay with each passing day (although probably out of the opening weekend), Everton can now spend a few weeks getting their house in order for the longer haul.

Even so, it will be fascinating to see the instant impact Koeman has on Everton, particularly in defence. Over the two seasons Koeman spent at Southampton, only Arsenal and Manchester United conceded fewer goals. Only Sunderland, Newcastle and Aston Villa conceded more than Everton. We might even see a three-man central defence.

The fraud/deity has arrived, and both camps are desperate to get off to a successful start. Should Manchester City struggle against Sunderland on Saturday, it will be evidence that the Premier League is tougher than Pep Guardiola thought. If City win comfortably, we will already be witnessing his genius.

In fact, the first league game of the Guardiola era will have a very familiar feel to it. Leroy Sane and Ilkay Gundogan are injured, John Stones may not be ready to start and Gabriel Jesus and Marlos Moreno have been loaned out. Nolito is available, but Guardiola is more like to pick a 4-2-3-1 formation with Kevin de Bruyne, David Silva and Raheem Sterling behind Sergio Aguero and Fabian Delph and Fernandinho as the central midfield pair. As you were, then.

Still, Guardiola will be under plenty of pressure to start at sprinting pace. City have scored 27 goals in their last eight home games against Sunderland, and David Moyes has had very little time to prepare his Sunderland squad. Anything other than a victory by more than a single goal, and the whispers will begin. Football is ridiculous.

Two players born more than 15 years apart, and the grand old man of the Premier League comes up against the reigning PFA Young Player of the Year.

Ronald Koeman was probably intending to ebb away at Barry’s workload this season, but the serious knee injury suffered by Muhamed Besic in Wayne Rooney’s testimonial makes Barry’s presence in the team a certainty. Koeman has added Ashley Williams and will add Yannick Bolasie to his squad, but they still look light in central midfield, even with the signing of Idrissa Gueye.

Barry was named Everton’s Player of the Season last year, and nobody at Goodison made more tackles or passes. Yet there is no doubt that Barry’s biggest weakness is against quick feet and pace. Enter Alli, stage right.

With some bookmakers, Norwich and Sheffield Wednesday are the second and third favourites to win the Championship title. That’s after Norwich swatted aside Blackburn on the opening day and Wednesday beat Aston Villa live on the telly on Sunday.

Carlos Carvahal’s side have opted for evolution over revolution after losing the play-off final in May, but have made potentially the signing of the summer in Almen Abdi. If Wednesday can reject the advances of Derby for Fernando Forestieri, those two former Watford players could form a partnership that takes the club back into the top flight for the first time since 2000.

Norwich start as comfortable favourites, with Alex Neil rightly confident that his team can continue their yo-yo recent history – Premier League, Championship, Premier League, Championship. Neil has made no secret of his intention to follow Burnley’s 2015/16 lead by signing one of the division’s best strikers, but lost out on Ross McCormack and was knocked back for Britt Assombalonga. Cameron Jerome and Steven Naismith both scored on the opening day, and will be out to prove that Norwich have plenty enough firepower already.

With the main European leagues yet to get underway, we go to Germany for their Supercup match; this one definitely isn’t a friendly.

Dortmund have had a summer of huge squad upheaval, with their best defender (Mats Hummels), central midfielder (Ilkay Gundogan) and attacking midfielder (Henrikh Mkhitaryan) all leaving Westphalia. Thomas Tuchel has been able to significantly invest those proceeds, bringing Andre Schurrle, Ousmane Dembele, Raphael Guerreiro and Sebastian Rode in for fees all above £10m.

Yet the focus will undoubtedly be on Mario Gotze, back at Dortmund after leaving for Bayern Munich. “Today, three years later and at 24, I look at that decision in a different light,” Gotze said. He is right to be worried about a frosty reception from the Dortmund supporters.

For Bayern, Carlo Ancelotti takes his bow as coach after taking over from Guardiola, with Renato Sanches the standout summer signing. Fans are hopeful that hiring a Champions League expert will be key to landing the big one for the second time in five years. The Bundesliga title should be a walk in the (Signal Iduna) park.

Where is Mike Dean?

Everybody’s favourite referee has been suitably respected by the Premier League, and given the opportunity to blow the first whistle of the new season. Look out for him booking players before the match has begun, because those headlines won’t write themselves.

Who is certain to score?

Recommendations for more sections are more than welcome, so leave them in the comments (unless you are Gerard Benson).