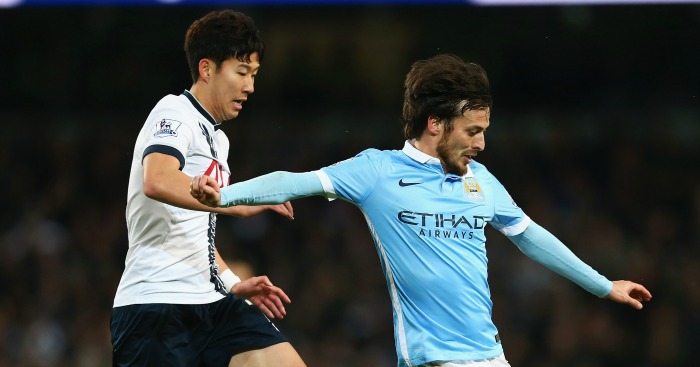 Game to watch – Tottenham v Manchester City
The Premier League’s top two, no less. Manchester United might play at lunchtime and Arsenal shortly before tea, but it’s the filling in Sunday’s Premier League sandwich that most intrigues.

The gauntlet has been thrown down to Tottenham to become the first team to beat Pep Guardiola’s Manchester City. The only critique of City’s perfect start to the league season is the standard of opposition faced; five of their six opponents currently hold positions 15, 17, 18, 19 and 20 in the Premier League. Yet if City brush past Tottenham on Sunday, ending the only other unbeaten record in the division, we really do have to consider them as ludicrously heavy favourites to win the league.

Yet it will not be easy. The one thing Guardiola’s City have not yet faced in the Premier League is a side prepared to press and hound them for every pass, trying to force the mistake before exploiting it. Celtic did so to some effect in the first half on Wednesday, before eventually running out of steam and hanging on for a point.

It was also a tactic Mauricio Pochettino’s side used brilliantly in this fixture almost exactly a year ago and again in February, with Tottenham doing the league double over Manuel Pellegrini’s City last season. That ended a run of four straight defeats during which City had scored 16 goals and conceded two; Pochettino will hope that it is Spurs’ turn to exert their dominance.

Without Kevin de Bruyne, City’s attacking midfield is notably weakened, with David Silva probably pushed into a role further up the pitch. If Dele Alli, Heung-min Son and Erik Lamela can hound City’s defenders and defensive midfielders into clearing long up the field and wasting possession, there is reason to believe in success. City have still not been behind in the league this season; Spurs must look to test a resilience that has not yet been examined.

One of the statistical quirks of this fixture is that the last 25 meetings have produced only one draw, a 0-0 in the opening fixture of the 2010/11 season. The change in both sides in just six years is monumental (Shaun Wright-Phillips vs Vedran Corluka or Giovani dos Santos vs Kolo Toure with Patrick Vieira on the bench, anyone?), but you wonder whether both managers wouldn’t settle for an exact repeat before sharing a post-match glass of wine. Here’s to unbeaten records.

Player to watch – Adam Lallana
Liverpool’s lack of European competition will never be something celebrated by supporters at Anfield, but Adam Lallana is feeling the benefit more than most. It means he can be Jurgen Klopp’s livewire, haring around the pitch as an all-singing, all-dancing, all-sprinting midfielder before re-energising during the week.

Yet describing Lallana’s performances this season in effort terms is unfair. He might cover more ground than any other player in the league, but he’s also Liverpool’s joint-top scorer and top assist provider. Add in a willingness to muck in and tackle, and you basically have a manager’s dream.

This Saturday lunchtime, Liverpool travel to Swansea. Watching Jack Cork and Adam Lallana try and thwart each other’s passing and movement is going to be the sexiest all-English battle since Groovejet vs Out Of Your Mind in August 2000.

Team to watch – Chelsea
Chelsea’s impressive start to the season means that they are still only four points off second place, but Antonio Conte’s team are accelerating off in the wrong direction. If the draw at Swansea was unfortunate and the home defeat to Liverpool concerning, the 3-0 loss to Arsenal last weekend was as bad as anything from last season.

Conte’s arrival has certainly not proved to be a magic fix for a limp defence that conceded more league goals than Crystal Palace, Watford and Swansea last season. David Luiz’s performances have not been as bad as accused; Gary Cahill’s have been far, far worse. Add in Branislav Ivanovic’s continued decline and Thibaut Courtois’ occasional incompetence and you have a rickety building that creaks and sways in the wind. John Terry’s possible return to the side will be welcomed, but they should not still be relying on their veteran captain.

It may only be Hull City, but Chelsea need to show some marked improvement this weekend. Diego Costa must not be left isolated, the central midfield must not be so easy to dribble past, Eden Hazard should not be so starved of possession and the defence must not look like it is recreating the Basil the rat scene from Fawlty Towers whenever the ball comes close to the penalty area. Anything less than three points, and we have our next elite ‘crisis’ club of 2016/17, following Arsenal and Manchester United.

Manager to watch – David Moyes
“Yes, there is, there’s something [wrong],” said David Moyes after Sunderland had lost to Crystal Palace. “But I’m no closer to identifying it.”

It’s an astonishing admission for a manager to make, particularly one in charge of a team at the bottom of the table. Of course it’s a fairly self-evident statement given Sunderland’s rotten results during Moyes’ first two months in charge, but at least part of managerial success is PR. There’s nothing to be gained from telling everyone else you’re being useless when they’re quickly working it out for themselves.

Moyes’ admission also spells danger for his immediate future. Were Sunderland to believe – or even hope – that Moyes was making improvements, they would have far more reason for patience. As it is, his honesty could easily persuade them to make a change and sack him in favour of someone who can improve the club’s fortune on an ASAP basis.

The £30m Moyes spent on his squad already looks like being enveloped by the dank smog already surrounding the club, a mood not helped by Adnan Januzaj’s absence for the next six weeks. Reports suggest that Lorient were left shocked by the offer for Didier Ndong, so high it was above their own valuation.

This weekend, Sunderland face West Brom at the Stadium of Light. Following that they have four away games out of five, with the exception a league fixture against Arsenal. They really do need to start picking up points, or Moyes’ slump into the managerial abyss will only continue going one way.

One-on-one battle to watch – Zlatan Ibrahimovic vs Ryan Shawcross
The last time Shawcross faced Ibrahimovic was on his international debut. He came off the bench for the last 16 minutes in the Friends Arena (Central Perk?) in 2012 and promptly watched the striker score three times, including the most ridiculous overhead kick going. Shawcross has never been picked by England again.

“I’m the butt of the joke in my family, just because the 10 minutes I had in international football was ruined by one man,” Shawcross told the Daily Telegraph in March. “They are consistently saying that Zlatan ruined my career! I had a chance and I don’t think many other defenders have. I was given 10 minutes to show what I could do and probably didn’t provide a good enough performance. I was against one of the best strikers in the world who was on a hot streak at the time and these things happen.”

On Sunday, Shawcross must face Ibrahimovic again. Now 28, he will hope that his experience (and the Swede’s advancing years) can make it a far easier assignment, but the nerves from 2012 will not disappear. There will only be one image etched into Shawcross’ mind as he falls asleep on Saturday evening: That bloody man doing that bloody acrobatic kick.

Football League game to watch – Wolves vs Norwich
Although Wolves – and Walter Zenga – had managed to claw back some form with victories over Newcastle and Brentford, they lost 2-1 at Wigan on Tuesday, a rotten result that saw them drop to 11th in the Championship. That hard-luck story pales into insignificance in comparison with Norwich’s tragedy 24 hours later: 3-2 up at St James’ Park after 94 minutes to a 4-3 defeat by full-time.

Alex Neil will be looking for a response, as his side aim to return immediately to the top of the Championship. Having kept faith in their young manager, the Norwich board will be confident of a swift return to the Premier League. Until Wednesday, they had won four on the spin, scoring nine times and beating Everton at Goodison Park in the process

Having been permitted to spend all of the Nathan Redmond transfer fee on new players, Neil will know that the pressure is on to keep Norwich in form and up towards the Championship’s upper reaches. The key to success in the Football League is to minimise the inevitable setbacks associated with regular Tuesday-Saturday football and exploit the good results to their maximum. Wolves and Norwich are both trying to achieve the first of those two ideals.

European game to watch – Bayer Leverkusen vs Borussia Dortmund
Slightly frustratingly, the best European game to watch on television this weekend clashes with the best Football League game. So it’s time to get out the iPad, set it up next to the TV and pretend you’re Gary Lineker in the Match of the Day studio. Yes, that can mean sitting in your pants.

Saturday’s game pitches the two clubs with the greatest designs on finishing second, which is as tragic as it sounds with Bayern Munich so far ahead of the rest. Last season Dortmund finished 18 points ahead of Leverkusen, who themselves were five points ahead of Borussia Monchengladbach. This season Leverkusen have started slowly, but victory over Thomas Tuchel’s team will cut the gap to their opponents to two points.

Leverkusen have not won in nine league meetings against Dortmund, but did cause a stir in this fixture last season, when the game was suspended for eight minutes after coach Roger Schmidt refused to leave the field despite being sent from the dugout for his protestations against a Dortmund goal. The referee took the players off the field and waited until Schmidt agreed to his dismissal. Anything like that would be greatly appreciated.

Where is Mike Dean?
He’s only gone and got the big one, aka Watford vs Bournemouth. You might consider this a bit of a ‘B’ fixture, but that’s only because you haven’t considered the possibility of Harry the Hornet, the most banterous of all the Premier League mascots, doing an interpretive dance of Mike Dean’s penalty box pointing. If there is a God, it will happen.