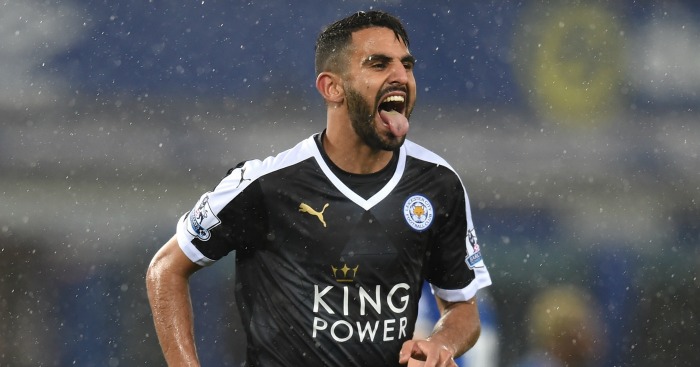 We’ve included both Premier League and FA Cup stuff in this week’s Big Weekend. Don’t all rush to say thanks at once.

Leonardo Ulloa
Leicester’s forward line this season has not just stuck to the script, it has followed every stage direction and made extra notes in the margin. Ulloa may have played 26 Premier League matches this season, but he’s only amassed 770 minutes. He has played the back-up striker role perfectly well, scoring four goals in the process, but has never been more than the next best thing.

Now Claudio Ranieri must find a different plan. With Jamie Vardy suspended for at least the game against Swansea, Leicester’s manager must choose whether to start the Argentinean striker, or instead play with Shinji Okazaki as the lone striker in a 4-2-3-1 formation.

The temptation to do the latter must be strong. It is hard to imagine two more different strikers to Ulloa and Vardy. Unless Okazaki can carry out the work of two nuisance strikers – and find pace he has so far not displayed – Ranieri is looking for a Plan B. It’s success may decide whether Leicester lose their grip on the Premier League trophy.

Louis van Gaal
If Van Gaal is to unexpectedly keep his position as Manchester United manager, he simply must win on Saturday. The Dutchman will surely require Champions League qualification to hold on to his job, but even that will be rendered insufficient should United fail to win a trophy for the third consecutive season. That would represent their longest drought since 1989.

United could not have been given an easier path to FA Cup victory. Having faced only one Premier League opposition in four FA Cup ties so far this season, the three other teams left in the competition are all in, or at least in something approaching, crisis.

In the Premier League, Everton have taken three points from their last 21 available, Watford have taken 12 from a possible 48 and Crystal Palace nine from 51 available. United have beaten all three teams in the league since the beginning of March, without conceding a goal. If Van Gaal somehow manages to stuff this opportunity up, he should start putting his stationery in cardboard boxes.

Roberto Martinez and inspiring his players
If Louis van Gaal thought he had problems, what about Roberto Martinez? Everton’s manager decided to pick a full-strength team in the Merseyside derby on Wednesday rather than resting players for the FA Cup semi-final, a move that backfired spectacularly. Everything Martinez touches turns to conceded goals.

Last month, Martinez spoke of the competition for places in Everton’s squad ahead of the semi-final after the 2-0 home defeat to Arsenal. “I know there’s been a lot of talk about the semi-final but every game is vitally important,” he said. “Unless you can show you are a player to drive Everton forward, it will be difficult to see how you can stay in the side.” Unfortunately, on that selection criteria Martinez would have no-one to choose from.

“The competition for places is as good as it’s ever been,” he continued. “The focus and the work has been terrific, that is why I couldn’t see this performance coming. That is the most hurtful part of it.” After five further games without a win since then, you presume that Martinez is at least getting used to such underperformance.

After the most one-sided Merseyside derby since 1982, Martinez is hanging on by a thread. Most supporters have lost all patience, and the senior players on Wednesday did their best impression of a group who have also given up their faith in the manager. With a new owner coming in with the heaviest of wallets, Martinez knows only silverware will keep the wolf from the door.

John Stones
With Ramiro Funes Mori suspended and Phil Jagielka injured, Stones is guaranteed to start at Wembley, so long as he has recovered from the stomach cramps that necessitated his withdrawal against Liverpool. An instant chance to redeem himself on a big stage, or another step backwards in his development?

Alan Pardew and Quique Sanchez Flores – season savers?
The similarities between Watford and Palace’s seasons are clear. Both rose to unexpected heights before Christmas, before slumping away worryingly since. Both managers have come under pressure for their inability to address the rot. The combined record of the two clubs up to Christmas was: P34 W17 D6 L11. Their combined record since Christmas is: P35 W4 D11 L20. One of those wins came against the other club.

If reports are to be believed, only FA Cup success would save Quique Sanchez Flores’ job, while Alan Pardew must also be under some pressure. Only Aston Villa have taken fewer Premier League points than him in 2016. We could genuinely have a situation whereby the three unsuccessful managers remaining in this season’s FA Cup will lose their jobs, while the winner keeps his.

Manchester City
With neither Manchester United nor West Ham playing in the league this week (they were due to face each other), City will know that victory is imperative in Saturday’s early game. Fail to do so and neighbours United would move level on points with a victory in their game in hand. With City’s only remaining home game coming against Arsenal and away form flakier than dandruff wrapped in puff pastry, Manuel Pellegrini needs a win after the setback against Newcastle.

Stoke have been Pellegrini’s bogey club since arriving in England, two wins and two defeats and five goals in his five matches against Mark Hughes. City both lost to Stoke at the Britannia in December and at home last season, both without scoring a goal. Time to banish those gremlins.

Sunderland
Sunderland may still be a point behind Norwich with Newcastle finally responding below them, but they should be the heavy favourites to survive relegation. The bookmakers might not fancy taking any odds on the market, placing all three clubs at comfortable odds on prices for relegation, but I’d back Sam Allardyce’s side every time in this mini-sprint.

That’s principally because of Sunderland’s gentle run in. After this weekend, Allardyce’s team face matches against Stoke (a), Chelsea (h), Everton (h) and Watford (a). Every single one of those clubs has nothing left to play for. Newcastle and Norwich must still face Liverpool, Tottenham and Manchester United.

That leaves Sunday’s game against Arsenal as something of a free shot for Sunderland, and Allardyce will be tumescent at the prospect of hammering another nail into Arsene Wenger’s coffin.

In December, Allardyce explained that his feud with Arsenal’s manager was in the past: “There’s managers who got under my skin. I think it was just wind-up stuff that we all get up to. It was a part of my life at that particular time, because I was growing as a manager, my team were growing to be successful.”

It would appear that Allardyce was still ‘growing as a manager’ two months earlier, when he wrote in his autobiography that Wenger was an “arrogant” manager who “can’t stand losing”. Takes one to know one, Sam.

Rafa Benitez
As I wrote in midweek Winners and Losers, ‘the suspicion grows that a squad of players has started performing when the fat lady had already finished her scales and was warbling her way through act one. Newcastle will probably need at least seven points from their final four matches to survive.’

Given that Newcastle face Tottenham on the final day of the season, the trip to Anfield must surely return at least one point. Jurgen Klopp’s side have the first leg of a European semi-final on Thursday, and must surely consider picking a team similar to the one that won at Bournemouth last weekend. If that is the case, Benitez must look to take advantage of the inadvertent favour from his former club.

Riyad Mahrez
Mahrez is the overwhelming favourite to be named PFA Player of the Year, but he might be fortunate that the votes have already been cast. There is no question that the Algerian is slowing down.

Splitting Mahrez’s numbers from this season into 2015 and 2016 records shows the relative slump:

Part of that is accounted for by Leicester’s change of strategy to a safety-first mode, but it is true that Mahrez’s form has tailed off. Without Jamie Vardy for at least the next game, Ranieri needs more from Leicester’s other miracle man. N’Golo Kante can’t score the goals as well.