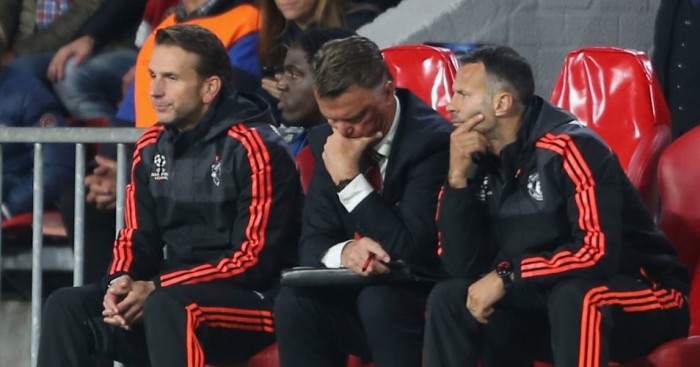 Louis van Gaal cannot afford to keep taking one step forward followed by another step back at Manchester United. Defeat is also unthinkable for Brendan Rodgers against Norwich, who might want to try not conceding against Liverpool this time…

Arsene Wenger
Only a week ago, Wenger took the opportunity to softly tell off those Arsenal fans who were criticising the club for a lack of summer signings.

“I think to support the club and support the team is to stand behind the players,” said the manager. “It is not always expecting someone coming down from heaven to sort out all your problems. Support is believing in the players in the squad, and this is a good opportunity to do that for our supporters.”

Wenger may define support as “believing in the players in the squad”, but if it’s believing that this squad, with no additions, was deep enough to challenge on all four fronts then naivety is the word he’s after. Defeat in Zagreb on Wednesday was not terminal to Arsenal’s season, but it offered further hints that Wenger is wrong in his assessment. As for telling supporters how to support their club, well that will never sit well with me.

Wenger heads into another showdown with Jose Mourinho in the unique position of having won their last match-up, but that Community Shield victory counts for nought. If Arsenal can leave Stamford Bridge with three points then his midweek changes will be forgiven. Make it eight league games without a win against Chelsea and the points raised here should be repeated at an even greater volume.

Jose Mourinho
Beating a dire Maccabi team did nothing to further harm Chelsea’s mood, but any boost will not be long-lasting. Fail to beat Arsenal at Stamford Bridge and the pressure will still be on Mourinho to arrest this diabolical start to the campaign.

Any Chelsea player who gets back in the team
If John Terry, Nemanja Matic and Branislav Ivanovic (we’ll leave out Diego Costa, who played the majority of the game against Maccabi) thought the spotlight was shining on them before, just wait and see the pressure if they are restored to Chelsea’s side for the match against Arsenal on Saturday lunchtime.

Tim Sherwood
‘I’ve never felt this bad, ever,” was the typically understated reaction from Aston Villa’s manager to defeat at Leicester last weekend. One presumes that Sherwood is a man regularly prone to such melodrama in the heat of the moment, but you take his point. To be leading 2-0 with 20 minutes to go and lose the game is the kind of scenario that gives a manager a headache for days.

Again in typical Sherwood fashion, he attempted to erase the latest failure by issuing a rallying call to his side. “These next two games mean absolutely everything to this club,” he said. “We’ve got two of the biggest football matches this club is ever going to have ahead of us. The players will know after the West Brom game that the next time they play it will be the most important game they are ever going to play in for this club.”

That’s probably turning up the hype-meter a little too far, even for Sherwood. The problem with piling on the importance of every match, even as a distraction tactic, is that it invites judgements about the manager. If Sherwood says that these are Aston Villa’s two most important games ever, what happens if he fails to win either?

Newcastle United
Newcastle fans have kept patient with their side and manager in the early weeks of the season. Having to integreate new players into a struggling squad is difficult at the best of times, but coming off the back of perhaps the most mutinous period in a club’s history makes things ten times tougher. Fixtures including Arsenal (h), Manchester United (a) and Southampton (h) made it no easier for the new manager.

Yet on Monday night in East London, supporters were once again plunged into something approaching despair. The result against West Ham was one thing, but Newcastle’s performance another entirely. Abject defensively, non-existent in midfield and blunt in attack. This was a display that truly deserved to see a side fall to the bottom of the league.

McClaren must wish he could change eight or nine players for the home game against Watford on Saturday. None of Daryl Janmaat, Massadio Haidara, Vurnon Anita, Florian Thauvin, Moussa Sissoko, Jack Colback and Papiss Cisse did anything to indicate that they merit immediate selection, but the manager has little choice but to simply demand more from a large proportion of that list.

Chelsea and Manchester City are Newcastle’s league fixtures directly following this weekend, and it is a fallacy to suggest that games as early as mid-September cannot be must-win. Lose at home to a newly promoted side at St James’ on Saturday, and the groans around Tyneside will be audible from Darlington.

Defeat would also extend McClaren’s 2015 league record to: Played 28, Won 8, Drawn 10, Lost 10. That’s not a good look, especially given a third of that time has been spent in the second tier.

Mark Hughes
The gloriously naïve expectation in some quarters was that Stoke would be lighting the Premier League’s night sky with their new travelling show of style and panache. It hasn’t quite worked out that way.

That’s entirely expected, of course. It takes time to bed new players into the club, and maybe even longer to acclimatise the likes of Ibrahim Afellay and Xherdan Shaqiri to life in the Potteries. Add the loss of Steven N’Zonzi to Sevilla and Asmir Begovic to Chelsea, and injuries to Ryan Shawcross, Glen Johnson and Jonathan Walters, and it’s clear why Hughes might be finding things tough.

Unfortunately, time and football wait for no man. Stoke are still winless in the Premier League, two points gained with 13% of the league season played. Rather than searching for excuses, Hughes will be looking for meaningful improvement. That must start at home to Leicester.

Bournemouth
I discussed in Winners & Losers on Monday how any sympathy for Bournemouth injuries actually counted for very little. The difference between Premier League survival and relegation is measured in points rather than goodwill, and the former are currently thin on the ground. Eddie Howe’s side may have four teams below them, but we could reasonably predict that three of them (Chelsea, Stoke and Newcastle) will improve over the next month or so.

That would leave only Sunderland below Bournemouth, with both sides facing off on the south coast on Saturday. Is this the first six-pointer of the season, or am I caving in to hyperbole?

Manchester United
There were reasons to be positive in defeat in Eindhoven on Tuesday, but one doesn’t want to get into the habit of praising defeat. Louis van Gaal is a manager for whom the method presides over the result, but football is a result-driven business. The question of winning ugly or losing beautifully sits as one of the pillars of football fandom but, from a manager’s perspective, there is only one answer.

United’s performance during the home loss to Southampton was one of the lowest points of United’s season, but this is a much-changed side in eight short months. Phil Jones, Antonio Valencia, Michael Carrick, Luke Shaw, Wayne Rooney, Angel Di Maria and Robin van Persie could all be missing from Sunday’s game. It’s time for the new breed to replicate and extend their exciting passages of play into their domestic performances. The first half against Liverpool last weekend was enough to make eyes close themselves and refuse to open again until both sides agreed to start trying.

United’s away record under Van Gaal is also less than stellar. Since mid-December last year they have played 14 league games on the road and won just five, taking 20 points . Even more concerning is that they have scored just 13 goals. To put that in perspective, that’s a scoring rate away from home that Leicester, QPR, West Ham, Everton and Crystal Palace all bettered last season.

Lose at St. Mary’s on Saturday, and all goodwill and hope extrapolated from the Liverpool victory will be a drop in a pool of negativity. What United now need is consistent improvement, rather than one sluggish step forward and another one back.

Liverpool
They surely won’t lose, but if they did, Brendan Rodgers really would be close to the precipice. Like him or otherwise, you can’t deny that it would be great fun to see his post-sacking press conference.

Norwich
In their last 426 minutes of matches against Liverpool, Norwich have conceded 20 goals. Try and keep it tight, lads.