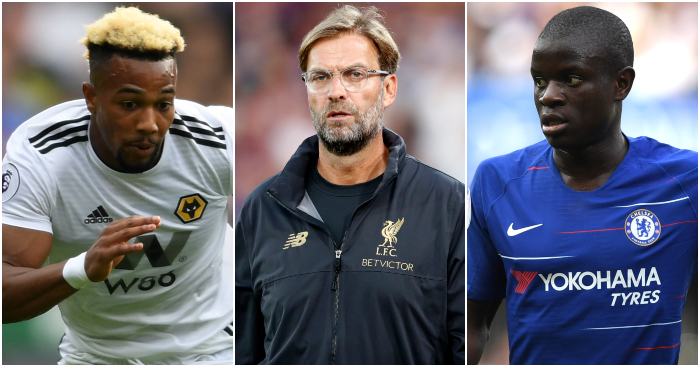 Game to watch: Wolves vs Manchester City
City have already made light work of Chelsea, Arsenal and Huddersfield so, on paper, it seems unlikely that top-flight new boys Wolves have much hope of stopping Pep Guardiola’s men from becoming the first champions to win their opening three games since 2011. But Nuno Espirito Santo’s side have previous for scaring City.

Wolves gave City one of their hardest tests of last season and became one of only two teams to shut them out at the Etihad with a 0-0 draw in the Carabao Cup. Eventually they succumbed on penalties but only after frustrating the hosts for 120 minutes, all the while creating the best chances in open play.

Of course, it was not City’s strongest XI – though not far off –  but Nuno also rested key players. Wolves’ summer recruitment gives the manager entirely different options but the blueprint is available for Nuno should he choose to study it ahead of Saturday lunchtime’s meeting at Molineux.

As Wolves demonstrated, City can be breached on the break, and now they have possibly the division’s most exciting counter-attacker within their ranks. Adama Traore impressed off the bench during the 2-0 defeat to Leicester, offering the kind of direct, pacy threat that the Championship winners have lacked in their opening games. At home with little to lose, perhaps Nuno might unleash the former Barcelona speedster upon the champions?

City’s approach will be no different to their previous three matches – or the 38 before those – but Guardiola has reportedly been hammering home the importance of avoiding complacency, and  the message was received prior to Huddersfield’s visit last weekend. “I think everyone has been warned enough,” said Vincent Kompany and – having been given a fright by Wolves not too long ago – it seems unlikely that City’s mentality will be found wanting. Nevertheless, Wolves’ new look means City are stepping into the unknown and the result is likely to be a high-scoring affair.

Player to watch: N’Golo Kante
One of the most intriguing changes made by Maurizio Sarri at Chelsea has been the new role for his midfield machine. The fact he had only one shot in the penalty area throughout the whole of last season made the World Cup winner a surprising scorer of the first Premier League goal under Sarri but the new manager has evidently let his dog off the leash and Kante is making the most of his new-found freedom.

Kante has been shifted marginally to the right of Sarri’s midfield, giving the France star a slightly tweaked job brief, but the benefit is quite simple: why restrict the best tackler to his own half when he could be pickpocketing in areas far more threatening for Chelsea?

Given Sarri now wants Chelsea to defend with the ball rather than without, Kante has perhaps the greatest individual adjustment to make but the team are also yet to fully acclimatise to the new style. The Blues had a “horrible” 15 minutes against Arsenal last week when they conceded two goals and could quite easily have allowed a couple more. Their new back four lacked any shield and though that was Kante’s primary function last season, neither he nor Jorginho were to blame. Chelsea pressed high individually rather than in units, which allowed Arsenal to easily break through. It was a blip, a major one, but something Sarri rectified at half-time.

Newcastle do not possess the same pace nor similar technical quality to play through the gaps Sarri is yet to plug. The visit to St James’ Park, where the visitors have a wretched recent record, will offer an insight into how Kante is coping with the expectation to play rather than simply spoil.

Manager to watch: Sean Dyche
“I don’t think Sean has the squad to cope,” said Sam Allardyce this week when discussing Burnley’s two-pronged assault on the Premier and Europa Leagues. Big Sam’s note of caution came before last night’s trip to Olympiakos in their final qualifier first leg before the Europa League group stages. The trip to Greece – where they  lost 3-1 on a poor surface during a round trip of more than 3000 miles – came just 70 hours before the Clarets kick off in London against Fulham.

Dyche offered a polite response to Allardyce’s observation but his argument offered little evidence in rebuttal: “It’s well documented we have some injuries and we were looking for a couple more bodies in the market and that didn’t happen, and that’s the way it goes.”

The Burnley boss would be equally hard pushed to argue that their European endeavours haven’t already contributed to domestic lethargy. The home defeat to Watford last week was the Clarets’ fifth competitive game in 17 days at a time when their Premier League rivals are as fresh as they might be all season. Defeat at Fulham, who have yet to pick up a Premier League point, will only intensity the scrutiny over Dyche and the club’s failure to strengthen their ranks sufficiently when they had the chance.

Amid the concerns over keeping his squad fresh, Dyche also has to provoke an improvement up front. The only goal of the Premier League season came courtesy of a centre-back from a set-piece and the boss admits his attack is “a work in progress”. In the meantime, Dyche cannot afford for his usually-reliable defence to flounder amid a punishing work schedule.

Team to watch: Liverpool
It is only two games into the season but Liverpool have already paraded a multi-faceted armoury that they simply did not possess last season. The opening-day win over West Ham was as routine as it gets for Jurgen Klopp’s men but Monday’s victory at Crystal Palace displayed a resilience and doggedness that the Reds have not been known for.

The world’s priciest centre-back and the second-most expensive goalkeeper have given the backline an uncharacteristic composure when defending and something of a swagger when in possession. Of course, that confidence radiates beyond Alisson and Virgil van Dijk, but two clean sheets suggests Klopp might finally have built a solid foundation.

But the Liverpool boss is now a demanding man, which highlights the rise in his own personal expectations. “I was not too happy with our offensive play,” he said after the win at Palace. “The rhythm was not good, timing was not good.” If his attack is a work in progress then the rest of the Premier League has a problem.

Naby Keita has received widespread acclaim during his first two Premier League games but Klopp, not usually a manager who misses an opportunity to join a cheerleading rally, went the other way: “Tactically he can improve, and he must improve.”

It seems one of the main themes of Klopp’s early-season messages has been relentlessness. Everyone knows the Reds can roll over anyone when they turn it on, but they cannot sustain a title charge with the previous frequency of their off days. The visit of Brighton offers his players the opportunity to demonstrate to Klopp the kind of consistency they will need if they are to push Manchester City. And if the front six remain off-colour in Klopp’s eyes, he now has reinforcements where previously he had none.

The Seagulls will be flying on their way to Anfield following their second win over Manchester United in successive home games but they know they will face a far more complex challenge. “Liverpool is going to be completely different,” said defensive addition Leon Balogun. “I know how Klopp likes to play. It is going to be a lot quicker and a lot more intense.”

Everyone expects so – Klopp certainly does. His players have been served notice that improvement is expected.

Football League game to watch: Middlesbrough vs West Brom
The Friday night offering sees Tony Pulis take on West Brom for the first time since he left The Hawthorns. Given how their relationship ended, neither party will be surprised to be seeing the other in the Championship.

Pulis’s Baggies certainly would not have scored seven in any game, which is the memory freshest in the visitors’ minds on their way to The Riverside. Darren Moore’s men have notched 11 in their last two league games but the fact they are yet to keep a clean sheet in four Championship matches suggest the former centre-back still needs to fiddle with his side’s balance.

A Pulis defence is also a different proposition to Norwich and QPR’s porous rearguard. Boro have kept three consecutive clean sheets since the opening weekend, with three wins and a draw taking them level with Leeds at the top of the table. Just don’t be tempted to squeeze in Corrie before switching sides; Boro evidently start fast, with all six of their goals in the last three games having come before the 33rd minute.

European game to watch: Benfica vs Sporting CP
Anyone without an Eleven Sports subscription can still catch four Bundesliga matches and another four Ligue 1 games on BT Sport this weekend, but Storey has another little treat for anyone not wanting to watch the action on a PC or device…

With all the upheaval over European football being taken from TV to streaming platforms, you can watch Lisbon derby between Benfica and Sporting CP on Freeview on Saturday evening. Channel 95.

The Lisbon derby is likely to leave at least one of Sporting or Benfica trailing Porto in the title race, with the champions hosting pointless Vitoria Guimaraes the same day. Sporting have moved on from a calamitous summer during which they lost many of their stars, saw a new manager leave after nine days and a president depart. Nani rejoined the club for a third spell and the former Manchester United winger has made a promising start, scoring both goals in their second win of the season last weekend.

Benfica have made an equally promising start, winning their opening two while negotiating a tricky Champions League qualifying tie against Fenerbahce. They earned that Champions League place at the expense of new-look Sporting, for whom derby victory would provide more than just revenge and bragging rights.