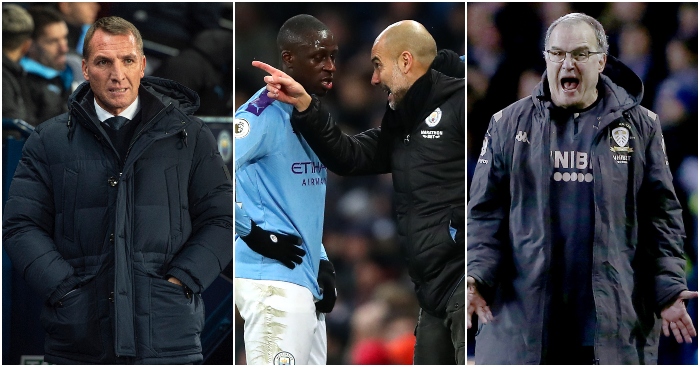 Game to watch – Wolves vs Manchester City
At Molineux and under the lights on Friday night. Their performance against Leicester aside, City remain a distracted presence in the Premier League. They retain their power, but it’s not showing in quite the same way as it did last season. At the same time, the defence remains in the kind of flux that a team like Wolves, with all that movement and ability in their forward line, are well placed to capitalise upon.

What’s becoming clear is that Nuno Espirito Santo is headed for coaching’s highest echelons, via one route or another. His headline accomplishment in 2019-20 has been to successfully compete across the Premier and Europa Leagues but, as last season demonstrated so often, he finds vulnerability in the top-six sides better than anyone working outside that cabal.

And who knows that better than Guardiola? He had real difficulty on this ground last season and, more recently, Wolves were the last team to nil City at home. That describes their talent, the texture of those results also depicted their counter-attacking and defensive strength, but Santo has proven effective at finding weakness in those sorts of teams far too often to be considered a one-tricky pony. His team are lethal on the break, but they’ve also become adept at controlling games.

It’s barely been ten days, for instance, since Tottenham were made to look very average in the Midlands. Helpless, even. Wolves eventually lost, somehow forgetting to mark Jan Vertonghen at a late corner, but Spurs travelled back to London that night having been shot through by Adama Traore and led a merry dance by Joao Moutinho’s rhythmic distribution.

So here we are again: one of the most aspirational clubs in the country, taking on an established and daunting power within the confines of the division’s best atmosphere. After the great let-down of Leicester against Liverpool, this could be the game of the Christmas period, let alone just this weekend.

Player to watch – Benjamin Mendy
His injury issues are the primary cause, but Mendy is still a player struggling for identity in English football. If he plays from the beginning at Molineux, it would be only his 22nd start for City in the Premier League; given that he joined the club in 2017, that illustrates just how unfortunate he’s been and, to an extent, makes most criticism redundant.

But what a time to be playing against, arguably, the Premier League’s form winger in Adama Traore. In that respect, this is more a ‘duel’ to watch – it’s about the two of them, rather than just Mendy. But the focus is still on him, because he remains more of a social media personality than a full-back and, as good as he may have been in the Monaco side that won Ligue 1, in this country we still know him more for his antics than his football.

But he’s key tonight. Wolves aren’t defined by Traore, but he’s someone for whom most teams don’t have an answer – even just athletically. When a full-back isn’t able to contain him properly or isn’t provided adequate support from midfield, that tends to come with consequences. Compensations have to be made elsewhere in the defence and, most likely, with the result of creating the kind of imbalance between the flanks which ultimately impacts attacking productivity.

The most important thing? Don’t get booked early. That’s a lonely, lonely place to be.

Team to watch – Leicester City
Six days ago, Leicester had only conceded 11 Premier League goals in four months. Add another seven to that tally now, though, after back-to-back defeats to Manchester City and Liverpool.

The Boxing Day defeat really was bitterly disappointing. Liverpool may very well be excellent, but the fawning in response to their 4-0 win at the King Power rather misses the point. Leicester are better than that. Yet again they betrayed their own standard when it really mattered.

The good news is that it shouldn’t do any lasting damage. They remain favourites to finish within the top-four and the fixture list should now gift them back some of that lost momentum. West Ham away will provide an excellent chance of a quick recovery and Rodgers’ team won’t face another top-six side until February 1st, when Chelsea visit.

But there are still questions which need answering. There are a few veteran players within this side, they’ll understand how to cope with disappointment, but its core is young and inexperienced and, as a result, likely to wear the effects of the past week more heavily. What of Maddison, Tielemans, Barnes and Ndidi, then, how do they respond do being shown up?

Psychologically it’s interesting, because that group isn’t used to criticism. To this point, they’ve been a good news story and their progress has been serene. Change the tone of the coverage, though, and start asking questions of how good they actually are and inhibition might start becoming a factor.

So, while playing a second game in 48 hours is an enormous physical challenge – Jose Mourinho and Jurgen Klopp both referred to the holiday scheduling as a ‘crime’ – Rodgers will also have to lead something of an emotional recovery in that time.

Manager to watch – Frank Lampard
The coverage of Lampard is just starting to change a bit. The loss to West Ham could be dismissed as an anomaly, at a stretch so could the defeat to Bournemouth, but after Southampton’s win on Boxing Day he’s beginning to look like a head-coach with a problem he can’t cure.

Chelsea are better away from home, so Sunday’s trip to the Emirates will suit them. But it’s an awkward time to be playing Arsenal, with Mikel Arteta now installed and, for once, the supporters and players all on roughly the same page. The team seems to have benefitted from a touch of bounce, too, and they were noticeably improved in the draw at Bournemouth even if they were unable to come away with a win.

The threat for Chelsea is obvious. Lose here and they could find themselves outside the top-four by the end of the weekend. But the danger for Lampard is in the potential optics. A loss to Arteta would be ugly. The Spaniard is supposed to be the novice. He’s the appointment made on the basis of… who really knows? Defeat to him, though, and all of a sudden Chelsea start looking like the naïve club and Lampard’s credibility would be that much more tenuous.

And credibility is important at the moment, because he and his employers are days away from returning to the transfer market and, as his predecessors have found out the hard way, bad results tends to make things a little more unilateral at Stamford Bridge.

Football League game to watch – Birmingham vs Leeds United
It’s beginning to happen again for Marcelo Bielsa and Leeds. December started well, with back-to-back 2-0 wins over Huddersfield and Hull, but it’s really not ending well. They lost a 3-1 lead to Cardiff two weeks ago, got beaten by Fulham the next weekend, and needed a very late equaliser at Preston on Boxing Day.

They’re fortunate, in that West Brom have begun to stutter at the same, drawing their last two, but the gap to the chasing pack is now just eight points.